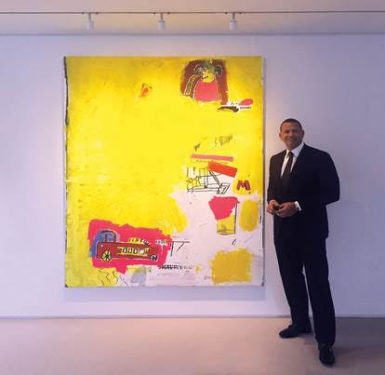 Later this month in London, Phillips auction house will sell two pieces from celebrity baseball player Alex Rodriguez’s collection. The two pieces, which had been displayed in Rodriguez’s Florida home, are Richard Prince’s Mustang Painting (2014–16), and Jean-Michel Basquiat’s Pink Elephant with Fire Engine (1984). Both will made available at a 20th-century and contemporary art evening sale on June 27.

To some, Rodriguez might seem like an unlikely patron of the arts, but in fact, he has been buying art for a decade. In a statement, he said, “A number of gallerists and advisors pointed me in the right direction, and I have been in conversation with several artists, whose studio practice seem close to my own as an athlete.”

In a statement, Robert Manley, Phillips’s worldwide co-head of 20th-century and contemporary art, said of Rodriguez’s pieces heading to auction, “Since he began his collecting journey, Alex has acquired an exceptional collection of works, featuring some of the art scene’s most coveted names, and we are honored to have been entrusted with the sale of these two extraordinary paintings.”