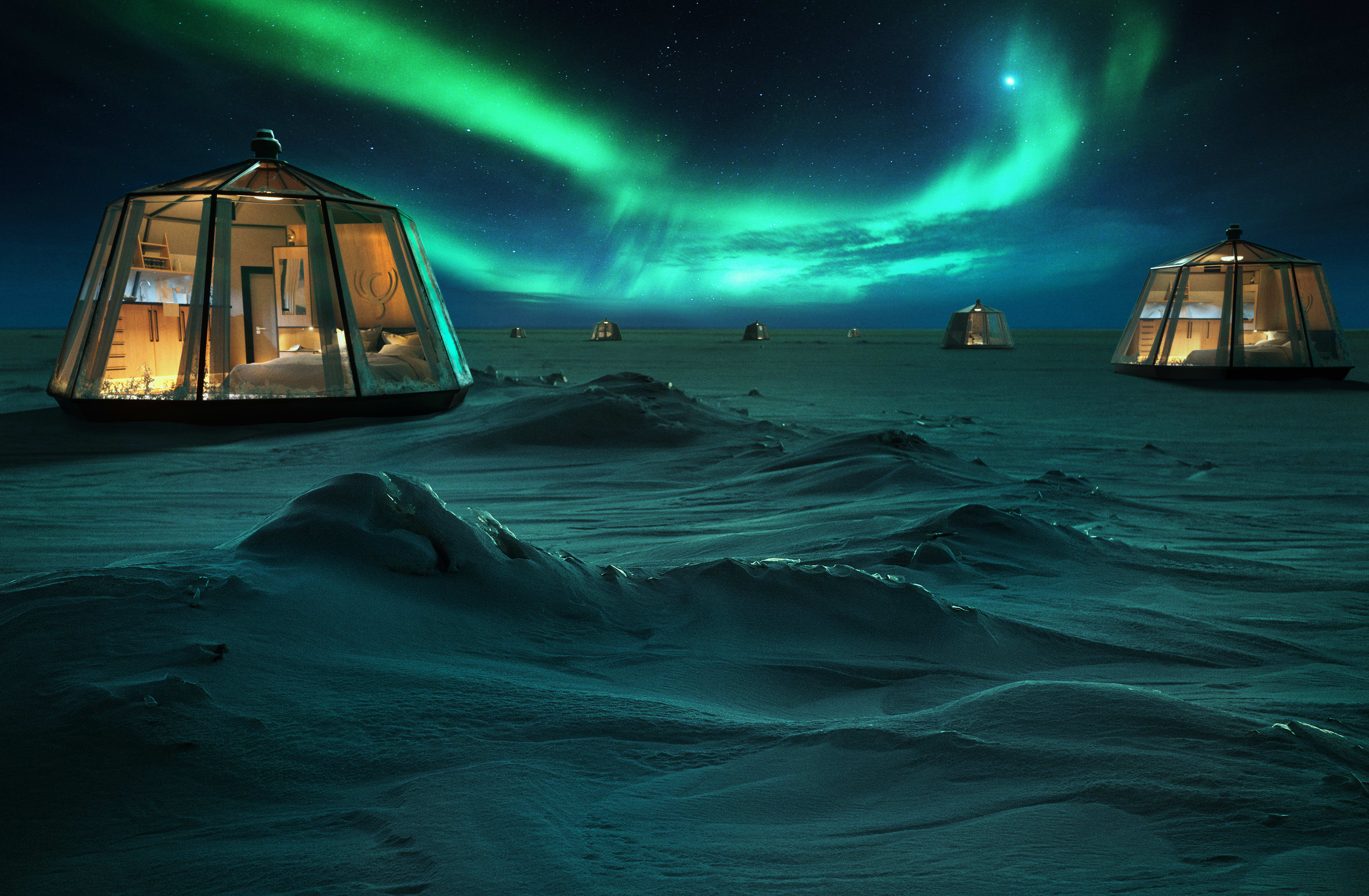 A luxury pop-up hotel is offering guests the chance to sleep under the stars in the North Pole — if they’re willing to part with $100,000.Would-be guests can reserve a stay at the North Pole Igloos — which will be the northernmost hotel in the world — throughout April 2020, the only month in the year when it’s safe to travel to the region.A stay at the igloos starts at 95,000 euros ($105,055), which includes two nights in the Norwegian islands of Svalbard and one night in the North Pole. Flights between Svalbard and the North Pole are included, as well as meals, security and travel guides.The camp itself is comprised of heated glass igloos, which have been tested in extreme Arctic weather conditions and will be moved around the area as the weather changes. Transparent ceilings and walls allow visitors “to be one with the nature and experience the Northern Lights,” according to the hotel operators.Guests can also opt for a three night stay in igloos at a glacier in Svalbard, where prices start at 48,000 euros and the hotel isn’t limited to visits in April.The resort is operated by Luxury Action, which runs a string of five star retreats in the Arctic. Its founder and CEO, Janne Honkanen, told CNBC the company worked to offer sustainable vacations that raise awareness around the impact of climate change.”The North Pole is one of the most exclusive travel destinations on Earth,” he said. “All our guests (are concerned about) Arctic nature and the climate crisis. I believe they are also the best messengers to spread word of how climate change affects our lives in the Arctic and its effects on Arctic animals and nature.”The North Pole Igloos is set to become the latest competitor in the increasingly crowded industry of unconventional hotels.Aurora space stationAn artist’s impression of the Aurora space stationOrion SpanFor those looking to take a vacation to space, commercial space company Orion Span is promising to start sending tourists to its space station in 2022. Guests at the station will have to complete a three-month astronaut training course, with a 12-day stay costing $9.5 million. Potential visitors can join Orion Span’s waitlist with a deposit of $80,000 per person, which can be paid in U.S. dollars or cryptocurrency.Underwater suiteUndersea Room at Conrad Maldives Rangali IslandJustin Nicholas | HiltonSince November, visitors to the Maldives have had the option to stay in a luxury suite that sits more than 16 feet below sea level in the Indian Ocean. The “Muraka” residence, part of the five-star Conrad Maldives Rangali Island resort, includes butler’s quarters and an infinity pool, with package stays costing around $250,000.UFOThe UFO room at Treehotel in Harads, SwedenTreehotelFor almost a decade, Sweden’s Treehotel has offered visitors the option to stay in a UFO-inspired room among the treetops. Accommodating up to five people, the UFO room is suspended on wires and beams that are attached to the trees. The room, which is accessed via a collapsible electric ladder, comes complete with a star-studded ceiling and matching bed sheets. Prices start at 4,700 Swedish krona ($483) per night, with the resort also offering stays in a gigantic bird’s nest.Underground hotelThe exterior of the InterContinental Shanghai WonderlandInterContinental Hotels GroupInterContinental’s Shanghai Wonderland was built in an abandoned Chinese quarry, and now offers travelers the chance to spend a night a hotel that stretches 288 feet below the ground. Luxury suites come with a butler service and artificial intelligence technologies from Chinese tech giant Baidu, with the resort also operating a rock climbing wall that InterContinetal says is the only one in the world to go “below the horizon.” Rates at the Shanghai Wonderland start at around $311 per night.A transparent hanging bedroomSkylodge Adventure SuitesNatura ViveSkylodge Adventure Suites claims its glass pods, which are suspended more than 1,200 feet above the Peruvian Andes, are the first hanging lodges in the world. The rooms offer impressive views of Peru’s Sacred Valley and starry skies on clear nights. Adrenaline junkies can access the hotel by climbing the 400-meter Via Ferrata rock face or flying to their room on a zipwire. One-night stays, which include the ascent or zipline and a gourmet dinner, begin at around $440. Guests must be at least 18 years old.