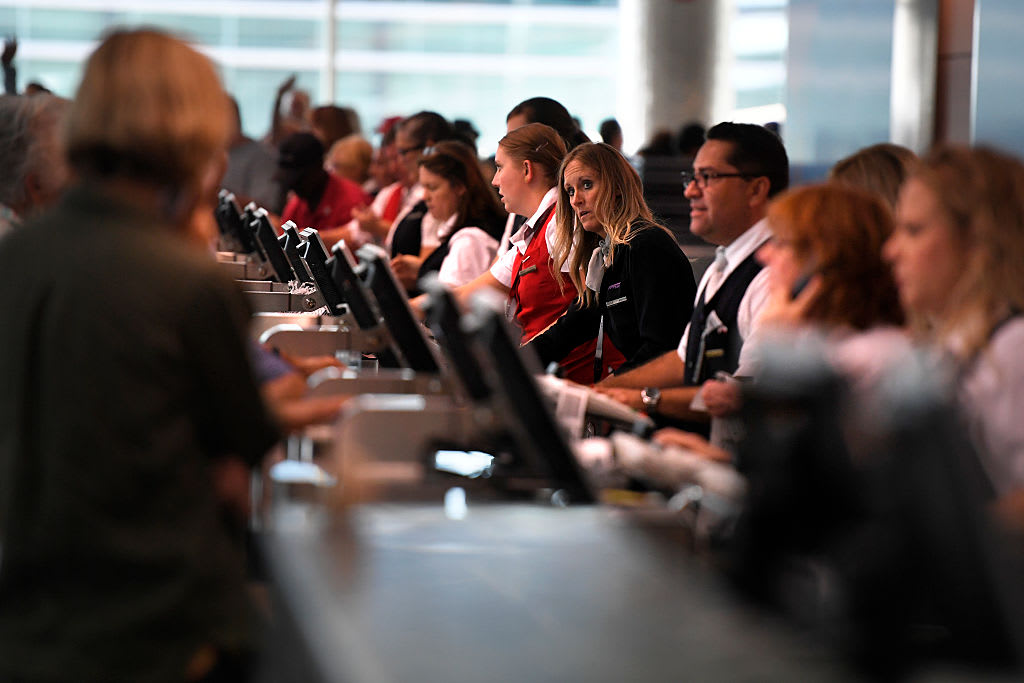 Delta ticketing/gate agent’s answer questions as they reroute stranded passengers at the Denver International Airport after a Delta Air Lines complete shutdown. August 08, 2016 in Arvada, CO.Joe Amon | Denver Post | Getty ImagesAlmost half of all airline customer service agents, tasked with dealing with travelers frustrated by missed connections, canceled flights and ever-increasing fees, have been threatened and almost all have been verbally harassed, according to a new government report.The Government Accountability Office, which surveyed 104 airline customer service agents at U.S. airports, said 92% of them said they were verbally harassed by passengers in the past year.Some incidents are even more severe. More than 44% of the agents surveyed, including gate agents, said passengers have verbally threatened them in the last year, according to the survey, which was conducted in March and April of this year. More than 11% said they were physically assaulted and double that percentage said a passenger attempted to physically assault them.Alcohol consumption, frustration over airlines’ “business practices,” such as fees for carry-on or checked luggage and long lines, “can contribute to these incidents,” according to interviews the GAO conducted with staff from airlines and airports, prosecutors and law enforcement.Social media had already thrust confrontations between airline personnel and passengers onto the national stage, but a turning point was the violent dragging of David Dao by local law enforcement off a flight operating for United in April 2017 after he was bumped off his flight. It prompted airlines to revamp programs to train personnel to diffuse tense situations and to avoid bumping passengers at the airport.Airlines, including Delta, United and American, require training for their customer service agents, as they do flight attendants, to prevent tense situations with passengers from escalating.For example, in August 2017, American made the training mandatory for all customer service and reservation agents. Its web-based de-escalation training goes by the acronym L.A.S.T., which stands for listen, apologize, solve and thank.

Pop-up hotel in the North Pole will charge guests $100,000 to stay
Here’s what it’s like on the 123rd floor of the world’s tallest condo
To Top
error: Content is protected !!