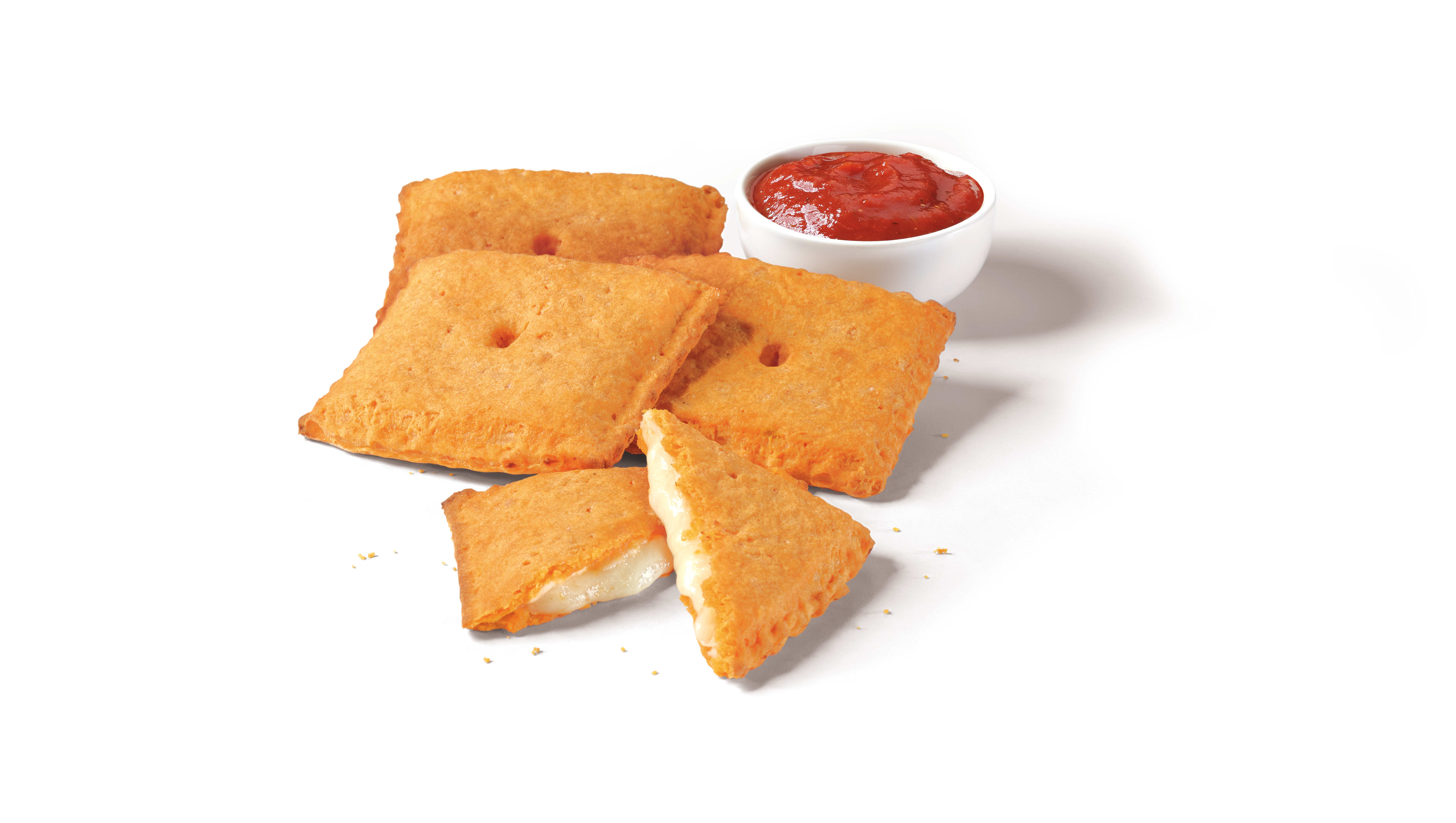 Pizza Hut Stuffed Cheez It PizzaSource: Pizza HutPizza Hut has pizzas for meat lovers, cheese lovers and veggie lovers.Now the Yum Brands chain even has one for Cheez-It lovers.The pizza chain is partnering with Kellogg to launch the Stuffed Cheez-It Pizza on Tuesday. The limited-time menu item includes four large squares with a crust infused with the sharp cheddar flavor of Cheez-Its and stuffed with either cheese or pepperoni and cheese. A marinara dipping sauce comes on the side.Marianne Radley, Pizza Hut’s chief brand officer and a self-described Cheez-It fanatic, sees the item as either an add-on for larger dinner orders or an easy item to grab and go. Restaurants have been looking to snacks to boost sales.Working together with Kellogg on the stuffed pizza meant that Radley learned about how Cheez-It manages to cram so much cheese flavor into its crackers — the topic of a long-running ad campaign by the brand.”I always thought it was cheese flavoring, but it was really is cheese that is baked into their crackers,” Radley said in an interview. Nondisclosure agreements kept her from saying more.Pizza Hut has partnered with well-known food brands in the past, like Hershey’s for its brownies or Cinnabon for its mini cinnamon rolls.Pizza Hut and Kellogg are brainstorming new ideas for 2020, according to Radley. Even the Stuffed Cheez-It Pizza could come back in a different form, with new fillings or even a different Cheez-It flavor.Earlier in September, Kellogg announced the launch of Incogmeato, a new product line from its Morningstar Farms brand. The meat substitute line, which includes burgers and chicken tenders and nuggets, will be made with non-GMO soy designed to look and taste like real meat.Radley said Pizza Hut is looking into the plant-based meat trend kickstarted by Beyond Meat and Impossible Foods, but the product would have to taste good, hold up well in delivery and not add too much extra work for employees. Privately held rival Little Caesars has already teamed up with Impossible Foods to test meatless sausage for its pizzas.”It’s a natural conversation that we’re having with Kellogg’s and with some other suppliers as well,” she said.Kellogg acquired Cheez-It in 2001 as part of its deal for Keebler. In April, the maker of Eggo waffles sold off its cookie business, including Keebler, so that it could focus on snacks like Cheez-Its and Pringles as well as its cereal business.Pizza Hut, the laggard of Yum’s three brands, is in the middle of its own makeover. As food delivery booms and consumers look for more convenient options, the chain is trying to remind customers that its pizza is available for delivery and carry out. It is planning to close 500 of its underperforming dine-in restaurants to convert them into smaller express stores as part of that push.In 2018, the pizza chain became the official pizza sponsor of the National Football League after the league and Papa John’s parted ways. This football season, Pizza Hut is hoping a collect-and win game with NFL-focused prizes will entice football fans to buy more of its pizza.”The second season, we really need to make the first partnership work harder for us. At the end of the day, it’s about driving transactions at the store level,” Radley said.