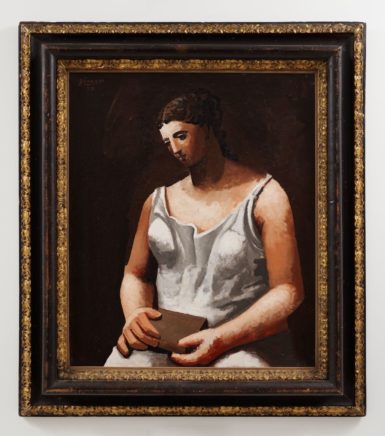 A Pablo Picasso painting that was the subject of a heated legal battle 15 years ago will go on view in Switzerland next week at Hauser & Wirth gallery’s Zurich space. The painting, Femme en Blanc, 1922, is being loaned to the gallery for the exhibition “Louise Bourgeois & Pablo Picasso: Anatomies of Desire.”

The painting has a rich recent history.

In 2003, Bay Area man Tom Bennigson sued the Chicago collector and philanthropist Marilynn Alsdorf over Femme en Blanc, which had been owned by Bennigson’s German-Jewish grandmother and was stolen by the Nazis.

In August 2005, Bennigson and Alsdorf’s lawyers reached a settlement whereby Alsdorf paid Bennigson $6.5 million and was allowed to retain title to the painting. (Bennigson had sued for $10 M.) Alsdorf and her husband, who passed away in 1990, bought Femme en Blanc from a Manhattan art gallery for $345,000 in 1976. At the time of the lawsuit, Alsdorf’s lawyers insisted that she had made the purchase in good faith.

According to articles at the time of the lawsuit, the painting’s history became apparent when a Los Angeles dealer brought it to Paris in 2001 to sell it, and a person interested in purchasing it looked it up on the Art Loss Register.

Contacted by ARTnews, a Hauser & Wirth representative said that the work is on loan from a private collector, and characterized Alsdorf as “a previous owner of the work.” The painting is not for sale.

Marilynn Alsdorf’s collection is known to be one of the best in Chicago. Last month, Crain’s Chicago Business mentioned her in an article about auction houses strengthening their presence in the Windy City.

With Estimate of $10 M. to $15 M., Lee Krasner Painting Could Break Artist Record at Sotheby’s -ARTnews