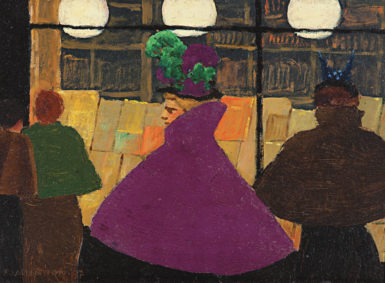 COLLECTION OF VICKI AND ROGER SANT/COURTESY THE PHILLIPS COLLECTION

The Phillips Collection in Washington, D.C., has acquired more than 40 paintings and works on paper, as well as two print portfolios, through a promised gift from Roger Sant and his late wife Vicki, who was a trustee at the museum. The Sants, who have appeared on the “ARTnews Top 200 Collectors” list each year since 2013, have also designated a major bequest to create an endowment that will support the preservation, care, and study of their donated collection.

Dorothy Kosinski, director and CEO of the museum, said in a statement, “This gift from Vicki and Roger Sant is nothing short of transformative. Through the bequest, the Sants contribute mightily to the growth of our holdings and strengthen our role as a leading center for the research and presentation of late nineteenth-century European art.”

An exhibition of works from the Sant Nabi Collection, which includes works by Félix Vallotton, Pierre Bonnard, and Édouard Vuillard, among other artists, will open at the Phillips Collection in October. Titled “Bonnard to Vuillard: The Intimate Poetry of Everyday Life,” the show will be on view through January 26, 2020, and it will feature paintings, prints, ceramics, stained glass, and needlepoint pieces by eight artists.

Les Nabis was a group of European artists active in the late 19th century. The movement, inspired by the work of Paul Gauguin, served rejected naturalism in favor of more stylized views of nature. Members of the movement, such as Bonnard, Ker-Xavier Roussel, and Aristide Maillol, employed expressive color palettes in their pieces.

Elsa Smithgall, senior curator at the Phillips Collection, said in a statement, “Embracing a new, liberating approach to art that valued the poetry of suggestion, the Nabi coalesced around a shared belief in art’s intimate ties to everyday life. These visionary artists who considered themselves ‘prophets’ forged a new path in modern art that broke down the artificial barriers between the fine and applied arts.”

Museums Are Closing, But Their Websites Are Only Growing Stronger – ARTnews.com