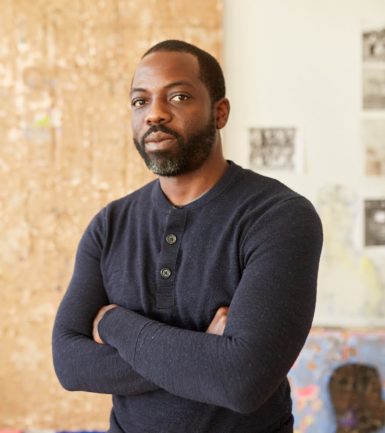 After debuting a mural outside the Whitney Museum in New York, artist Derek Fordjour has been added to the roster of the city’s Petzel gallery, which is planning its first solo show with the artist for September 2020. Fordjour, who is based in New York, will continue to be represented by Night Gallery in Los Angeles and Josh Lilley Gallery in London.

“After a series of visits and conversations, it was very clear after a while that Petzel was a good fit,” the artist, who works out of a studio in the South Bronx, told ARTnews over the phone. “I knew several people at the gallery independently, and I just found them to be really committed to art and very honest. I’m glad to have a home now in New York.”

Fordjour’s Whitney mural, Half Mast, which will remain on public display through May 5. An installation by Fordjour, whose work is held in the collections of Studio Museum in Harlem, the Dallas Museum of Art and the ‪Whitney, will go on view in January 2020 at the Contemporary Art Museum St. Louis.

Friedrich Petzel said that he was first intrigued by Fordjour’s work at Josh Lilley’s presentation at Art Basel Miami Beach last year, for which the artist transformed a booth using tin slats and a gravel floor. “The surface technique Derek was using, where he cuts layers off his cardboard constructions and tears into these elegant figurines reminded me, of décollage works,” Petzel said. “I felt I had never seen anything like it—paintings as animated as this and yet still coherent, with an American iconography that is very much of today.”