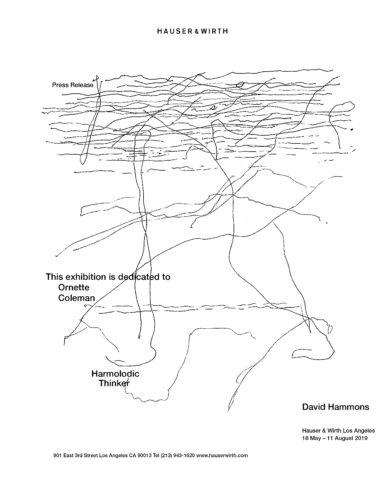 The wait for David Hammons’s solo show at Hauser & Wirth in Los Angeles—his first in the city in 45 years—is almost over. It opens on May 18, and on Monday a press release offered the first hints of what might be in store.

Those hoping for actual details about what will be on view will be disappointed, though that’s not surprising from an artist who has long made the control and circulation of information a key part of his practice. The document consists of nine words—“This exhibition is dedicated to / Ornette / Coleman / Harmolodic Thinker”—and an intriguing abstract drawing.

First, the drawing: it’s all quick-moving lines, most of them roughly horizontal, a few diagonal or vertical. In a couple instances, they loop back on themselves. It’s tempting to suspect that we’re looking at a sketch that was used to tell a story or explain an idea, that it was made by someone thinking along the way—perhaps showing how to plumb the ocean beneath rippling waves, or how to move through some other kind of field or space. It brings to mind the roughest drawings of Trisha Brown, Gerhard Richter, Julie Mehretu, and Albert Oehlen, but it’s sparer—strangely more functional—than all those. It also appears to be slightly degraded—like it’s been faxed or scanned or copied, maybe more than once—an indecipherable map or diagram or musical score coming in from a distance.

The text: Hammons, who is 75, has discussed his interest in jazz saxophonist Ornette Coleman in an essential (and very rare) as-told-to interview with Artforum editor David Velaso in 2008. Here’s the artist:

I was watching a video on YouTube in which Ornette Coleman presents a tune called “Spring” in Germany; he tells the audience, “Follow the idea of the song, not the song itself.” He also said, “Follow the idea, not the sound.” I was impressed with that. Follow how my ideas are put together, as opposed to whether the rainbow appears or the rain comes. I use this logic a lot. It moves in the realm of poetry as opposed to the actuality that people are used to or expect.

And harmolodics is a compositional method conceived by Coleman, who died in 2015, to create music that eschewed standard Western tonal structures. He put it this way in 1983:

Harmolodics is the use of the physical and mental of one’s own logic made into an expression of sound to bring about the musical sensation of unison executed by a single person or with a group. Harmony, melody, speed, rhythm, time, and phrases all have equal position in the groups that come from the placing and spacing of ideas. This is the motive and action of harmolodics.

As those lines imply, it was about more than music.

Hauser & Wirth isn’t commenting on what is planned for the exhibition—but who would want them to? We’ll find out what Hammons has decided to do just as soon as he wants to show us.