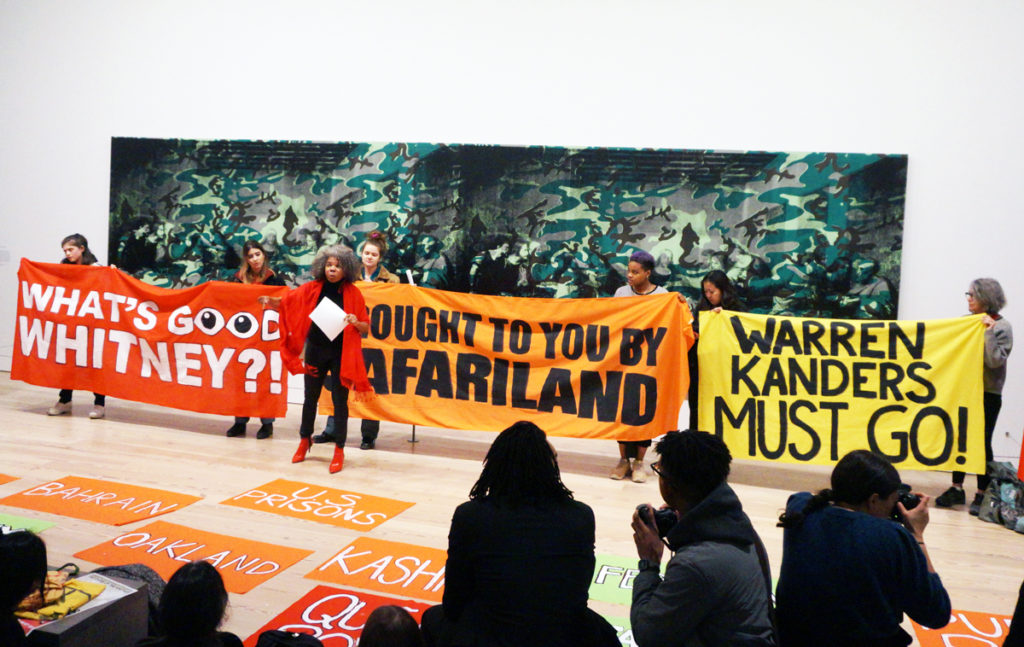 A protest held by Decolonize This Place held at the Whitney Museum on March 22, 2019. Speaking here is Alicia Boyd, of the group Movement to Protect the People.

On April 5, Verso Books, a progressive Brooklyn-based publisher of critical theory, fiction, and other writings, issued an open letter signed by 120 academics, artists, and critics who called for the removal of Whitney Museum board member Warren B. Kanders over his connection to the controversial defense manufacturing company Safariland. On Monday, Verso released a second list of some 100 signatories who added their names, among them 48 participants in the upcoming Whitney Biennial.

“The stakes of the demand to remove Kanders are high and extend far beyond the art world,” the letter reads. “Alongside universities, cultural institutions like the Whitney are among the few spaces in public life today that claim to be devoted to ideals of education, creativity, and dissent beyond the dictates of the market. Yet, these institutions have been historically entwined with the power structures of settler colonialism, white supremacy, heteropatriarchy, and capitalism.”

The news follows a series of protests at the Whitney staged by the activist group Decolonize This Place over controversy that began last year, when nearly 100 Whitney staff members, among them Whitney Biennial curator Rujeko Hockley, signed an open letter submitted to the institution’s higher-ups. Citing Kanders’s connection to Safariland, a defense manufacturing company that produces tear gas canisters used against asylum seekers along the U.S.–Mexico border and elsewhere around the world, the staff members called on Whitney director Adam Weinberg and others to consider asking for Kanders’s resignation as the museum’s vice chair.

Weinberg later released a statement in which he asked Whitney staffers to engage in a dialogue about Kanders and his work. Kanders himself said in a statement that he was “not the problem.”

Every Friday since mid-March, Decolonize This Place has staged protests at the Whitney, as part of a planned nine weeks of actions. The seventh action will take place this Friday.