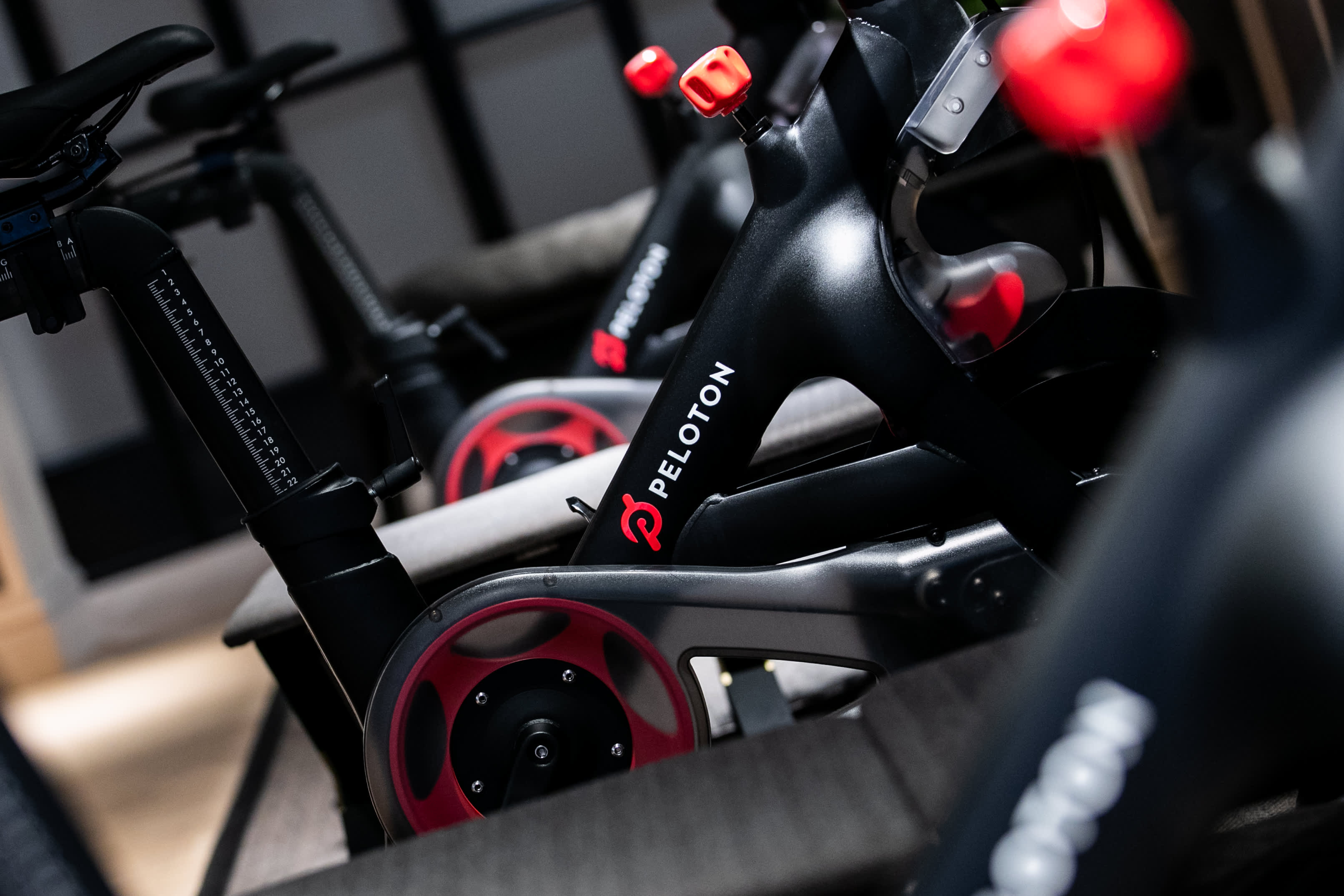 Peloton Interactive Inc. stationary bicycles sit on display at the company’s showroom on Madison Avenue in New York, U.S., on Wednesday, Dec. 18, 2019.Jeenah Moon | Bloomberg | Getty ImagesPeloton said Thursday its fiscal fourth-quarter loss widened as the pace of revenue growth slowed dramatically and costs associated with a treadmill recall mounted.Shares were down about 6% in extended trading on the news, after initially falling as much as 15%.Peloton warned its earnings will be hurt in the near term because it’s slashing the price of its original bike by about 20%. It’s also beginning to shift its business mix back toward treadmill sales, which are less profitable than those of its cycles.The company separately disclosed it found a problem with the way it has been accounting for inventory. An audit of fiscal 2021, which ended on June 30, discovered a “material weakness” in the internal controls that govern Peloton’s financial reporting. It will not, however, result in the restatement of any of its past results.Peloton offered up a disappointing first-quarter revenue outlook. The company faces heightened commodity costs and freight prices, while it plans to ramp up marketing spending in the months ahead.Here’s how Peloton did for the quarter ended June 30 compared with what Wall Street was expecting, using a survey of analysts by Refinitiv:Loss per share: $1.05 vs. 45 cents expectedRevenue: $936.9 million vs. $927.2 million expectedPeloton posted a net loss of $313.2 million, or $1.05 per share, compared with net income of $89.1 million, or 27 cents a share, a year earlier. That came in larger than the 45-cent loss forecast by analysts polled by Refinitiv.Total revenue grew 54% to $936.9 million from $607.1 million a year earlier, topping estimates for $927.2 million. But the pace of growth slowed from the third quarter, when sales more than doubled from year-ago levels and topped $1 billion.Growth tapered off, in part, due to Peloton recalling both its Tread and Tread+ treadmill products in May, and temporarily halting sales of the machines. Its less expensive Tread is set to go on sale next week. The company has not yet said when it will resume sales of the Tread+.But the cycle maker also faces stiffer competition from other at-home fitness businesses, such as Hydrow, Tonal and Lululemon-owned Mirror. And as pandemic restrictions are lifted, more consumers are opting to head back to the gym or take in-person group classes.”The past year represented an inflection point for the connected fitness industry, with significant increases in awareness and demand following the onset of the Covid-19 pandemic,” Chief Executive John Foley wrote in a letter to shareholders.Revenue from Peloton’s connected fitness segment, which includes contributions from the company’s acquisition of Precor, rose 35% year over year to $655.3 million, representing 70% of total revenue. Subscription revenue was up 132% to $281.6 million.Churn rate ticks upPeloton ended the quarter with 2.33 million connected fitness subscribers, a 114% increase from a year earlier. Connected fitness subscribers are people who own a Peloton product and also pay a monthly fee for access to the company’s digital workout content. Digital subscriptions — which don’t require equipment — were up 176% to more than 874,000, boosted by free trials, the company said.Average net monthly connected fitness churn, which Peloton uses to measure retention of connected fitness subscribers, ticked up to 0.73% from 0.52% a year earlier. Peloton’s churn rate had hit a six-year low of 0.31% in the prior quarter. The lower the churn rate, the less turnover Peloton is seeing with its user base.Average monthly workouts per connected fitness subscriber, meantime, fell to 19.9 from 24.7 a year earlier. The company said the decrease was expected due to seasonal trends, such as more people vacationing during the summer months or spending extra time outdoors.Moving forward, Peloton said it will no longer report average monthly churn rates on a quarterly or annual basis. Management said it remains an important metric, though it is becoming increasingly difficult to forecast.Q1 outlook disappointsFor its fiscal first quarter, Peloton is forecasting sales will reach $800 million, reflecting a reduction in the price of its Bike and a “modest” revenue contribution from the Tread.The forecast is well below the $1.01 billion that analysts estimated. However, Wall Street was unaware that the company would cut the price of its Bike by about 20%.To some, the move signals that demand for its products could be waning, and Peloton must spend more to make more money.”Competition is rising across connected fitness,” BMO Capital Markets analyst Simeon Siegel said. “Peloton discounting the Bike and upping marketing is a clear signal that the cost to acquire customers is rising after being the only player in the market last year.”Peloton anticipates having 2.47 million connected fitness subscriptions by the end of the quarter, with an average monthly churn rate of about 0.85%.The company also expects last-mile delivery costs will hit profit margins in the first quarter, which is historically a slower three-month period for Peloton.For the year, Peloton sees sales hitting $5.4 billion and connected fitness subscribers growing to 3.63 million. That’s ahead of consensus estimates for $5.27 billion.Peloton said it expects to return to profitability by fiscal 2023, which is also when its capital expenditures, including investments in its supply chain, will ease. Foley said the company is prepared to launch new products, but he didn’t detail what those might be.By 2023, Peloton expects to be producing cycles and treadmills from of its first manufacturing facility in the U.S., in Troy Township, Ohio. The company invested $400 million to build the site in order to speed delivery on its home turf.Find the full earnings press release from Peloton here.