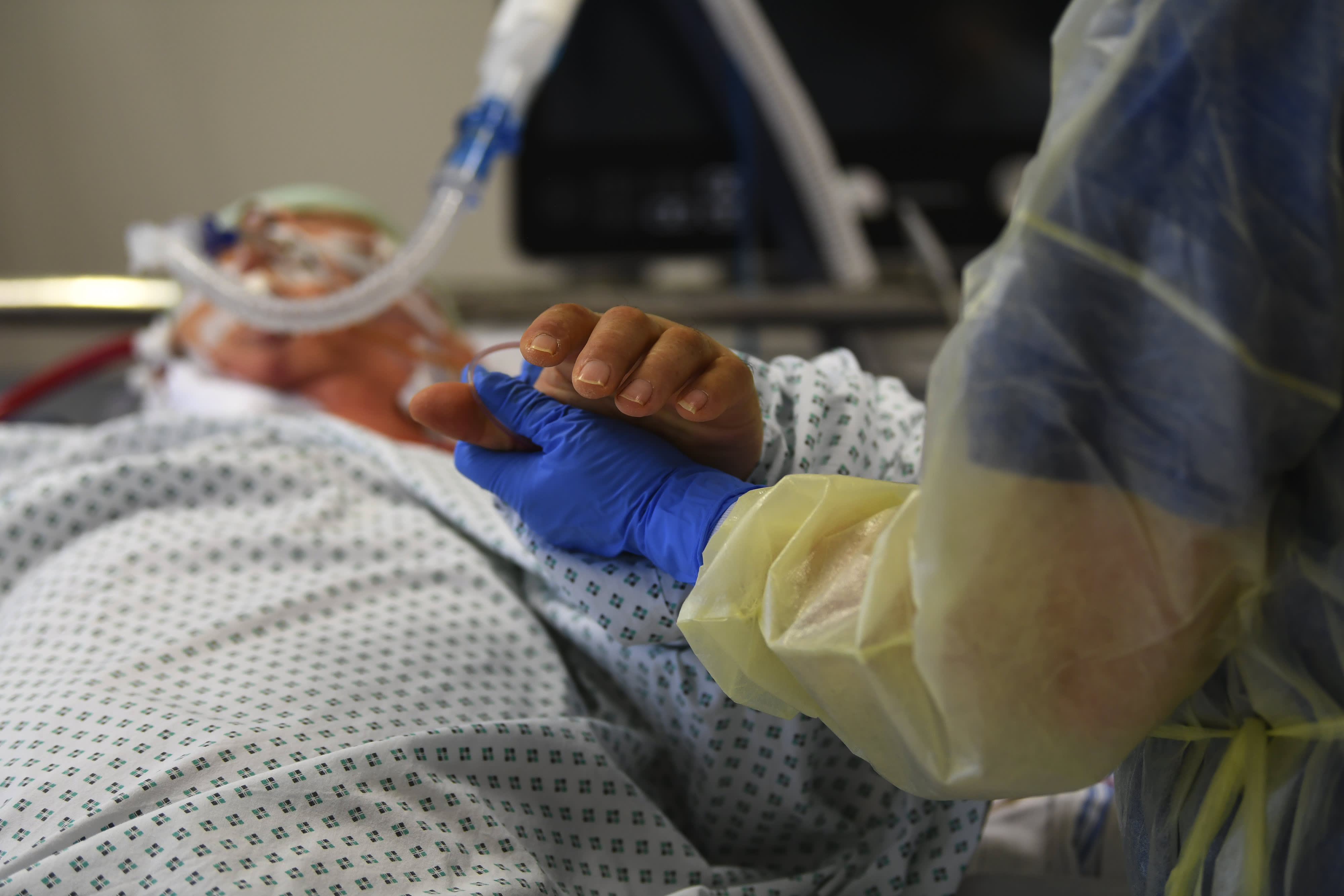 A healthcare worker cares for a Covid-19 patient in the ICU ward at the Robert Bosch Hospital in Stuttgart, Germany, on Tuesday, Jan. 12, 2021.Bloomberg | Bloomberg | Getty ImagesThe risk of rare blood clotting is significantly higher as a result of catching Covid-19, than it is from being vaccinated against the virus, a new study has found.In a peer-reviewed study published in the British Medical Journal on Friday, researchers from Oxford University, the London School of Hygiene and Tropical Medicine and several other British universities and hospitals analyzed data from more than 29 million people who had received their first dose of either the Oxford-AstraZeneca vaccine or the Pfizer-BioNTech vaccine. The study’s authors were fully independent from the Oxford-AstraZeneca vaccine developers.Scientists looked into rates of thromboembolic events – blood clots – and thrombocytopenia, a condition with low platelet counts. Rare blood clotting with low platelet levels has been associated with the Oxford-AstraZeneca Covid-19 vaccination.The paper compared rates of rare blood clotting after a first vaccination dose and following a positive Covid-19 test.Researchers found that the risk of these adverse events was “substantially higher” following Covid-19 infection than it was after receiving either the Oxford-AstraZeneca or the Pfizer-BioNTech vaccine.The dataIn the eight to 28 days after a first dose of the Oxford-AstraZeneca vaccine, researchers identified an increased risk of rare blood clotting events and low platelet counts. In the same time period after a first dose of the Pfizer-BioNTech vaccine, the study found the risk of blood clots and strokes caused by restricted blood flow to the brain (ischaemic stroke) increased.However, these risks were significantly lower than the risks posed by Covid-19 infection.Researchers estimated that 107 out of 10 million people would be hospitalized or die from low platelet counts within 28 days of receiving a first dose of the Oxford-AstraZeneca vaccine. By contrast, that number rose to 934 people per 10 million following a positive test for Covid-19.Within 28 days of a first dose of the Oxford-AstraZeneca vaccine, 66 people per 10 million were hospitalized or died from blood clots in the veins, compared to 12,614 per 10 million who had tested positive for the virus.Meanwhile, an estimated 143 people per 10 million were hospitalized or died of ischaemic stroke in the 28 days after a first dose of the Pfizer-BioNTech vaccine, compared to 1,699 who had tested positive for Covid-19.The risks also remained elevated for a longer period after contracting the coronavirus than it did following vaccination, the study concluded.The study analyzed routinely collected electronic health records to evaluate the risk of hospital admission for blood clots and low platelet counts within 28 days of infection or vaccination.The data used in the study was collected across England between Dec. 1, 2020 and April 24, 2021. Patients who were still in hospital by the end date of the study were excluded from the study.Vaccine trials ‘unlikely’ to detect very rare side effectsAll of the Covid-19 vaccines currently in use in the U.S. and U.K. have been tested in randomized clinical trials, which were unlikely to be large enough to detect very rare adverse events, researchers noted on Friday.When rare events are uncovered, regulators perform a risk-benefit analysis to weigh the adverse effects against the benefits of receiving the vaccine, the study’s authors added.The U.K.’s Joint Committee on Vaccination and Immunisation has consistently said that the benefits of the Oxford-AstraZeneca vaccine continue to outweigh the risks for the vast majority of people.Multiple health authorities, including the WHO, the European Medicines Agency and the International Society on Thrombosis and Hemostasis have also agreed that the benefits of administering the vaccine outweigh the risks.”People should be aware of these increased risks after Covid-19 vaccination and seek medical attention promptly if they develop symptoms, but also be aware that the risks are considerably higher and over longer periods of time if they become infected with SARS-CoV-2,” Julia Hippisley-Cox, professor of clinical epidemiology and general practice at the University of Oxford and lead author of the paper, said in a press release.”This enormous study has shown that there is a very small risk of clotting and other blood disorders following first dose Covid-19 vaccination. Though serious, the risk of these same outcomes is much higher following SARS-CoV-2 infection,” Aziz Sheikh, professor of primary care research & development at The University of Edinburgh and a co-author of the paper, added.According to the U.K. government, symptoms to watch out for include a new, severe headache that is not relieved by usual painkillers, a headache that worsens when lying down or bending over, unexplained pinprick bruising or bleeding, shortness of breath and leg swelling.