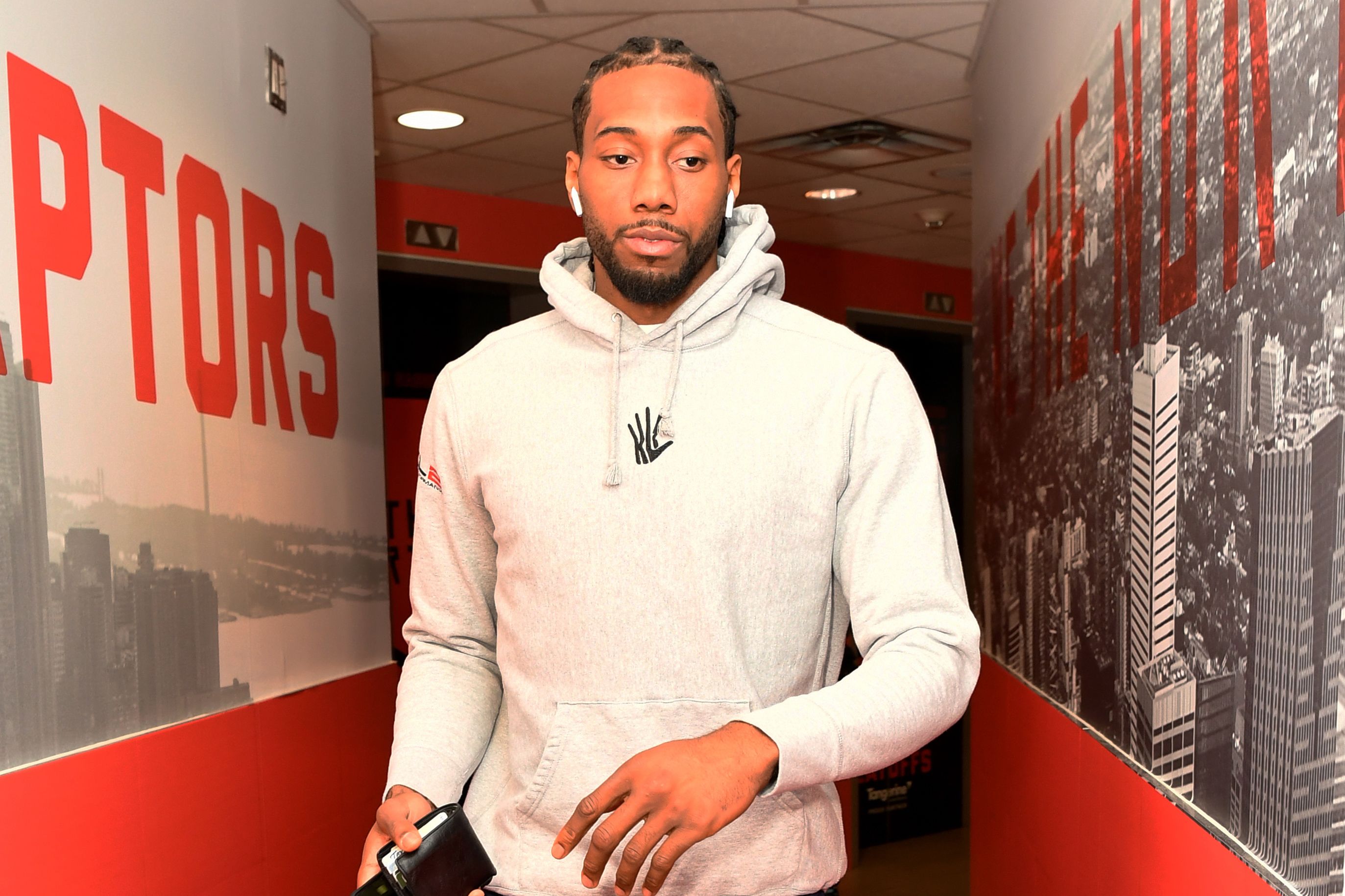 Kawhi Leonard of the Toronto Raptors arrives at the arena before Game Seven of the Eastern Conference Semi-Finals of the 2019 NBA Playoofs on May 12, 2019 at the Scotiabank Arena in Toronto, Ontario, Canada.

Toronto Raptors star Kawhi Leonard is taking on his former sponsor, Nike, in a trademark dispute over his personal logo.

The 2014 NBA champion, filed a lawsuit on Monday, alleging Nike filed a copyright of a logo he originally created without his permission, unbeknownst to him.

Leonard was a Nike-sponsored athlete from October 2011 until September 2014. He now has a sponsorship deal with competitor New Balance and wants to use his “Klaw” logo “on clothing lines, footwear and other products … in connection with sports camps and charity functions, but Nike explicitly objected to such uses,” the lawsuit said.

The lawsuit claims that since his college years, Leonard came up with ideas for a personal logo that would be unique and meaningful to him. The “Klaw” logo in question is an outline of the basketball star’s hand that includes his initials and the number 2, which is his jersey number.

“Leonard is known for his extremely large hands. Throughout his career, spectators have noticed Leonard’s large hands and they are often described as contributing to his success as a player,” the suit reads.

Leonard said he shared the logo with Nike and allowed them to use it on their merchandise but says he never transferred the rights to the logo. “Conversely as the many communications, including text and e-mails show, Leonard permitted Nike to use the Leonard logo for their mutual benefit … for the term of their contract,” it said.

The New York Times reported last week that the Los Angeles Clippers may be making a play for the logo as well in an attempt to lure Leonard to their team when he hits free agency this off-season.

Ultimately this case will come down to the licensing agreement between Leonard and Nike, multiple sports law attorneys tell CNBC.

“The complaint sets forth claims that strongly indicates confusion and trademark violation. The court would have to look at what Kawhi Leonard alleges but what the underlying contract is ultimately what’s the most critical,” said Marc Edelman, law professor at Baruch College, who has served as an expert on several trademark damages case.

Scott Rosner, academic director of the sports management program at Columbia University, said there is a lot of bad blood between Nike and Kawhi over the end of their relationship and Nike could be looked at as the “spurned ex.” Nike is trying to prevent privately held New Balance, in particular, from monetizing Kawhi’s brand.

“A loss for New Balance and Kawhi is a win for Nike,” he said. The more that Nike can prevent its competitors from gaining any sort of traction the better off they are,” he added.

Whatever the legal outcome, Edelman said from a public relations perspective, Nike has little upside.

“Even if Nike were legally in the right, the mere fact that a brand that relies so heavily on elite commercial athletes would attempt to prevent one of its former partner athletes from marketing his own license will make it far more difficult for Nike to sign endorsement deals with athletes in the future,” he said. “The NBA is a small, close knit league and picking a battle of this nature against one of the elite athletes seems like a fool-hearted move.”

For Leonard, his star has never shined brighter. At 27 years old, he is playing on center stage in the NBA Finals, competing against the two-time defending champions Golden State Warriors. Experts say it’s only natural that his business team is looking to commercially take advantage of his on-court success and push to sell merchandise to capitalize on it.

Nike has 30 days to respond to the complaint with either a motion to dismiss the case or by filling a response. However, law experts say that 90% of all complaints settle.

“Nike does not seem to have that much to gain from taking this case to final adjudication and has a lot to lose in terms of negative public relations,” said Edelman.