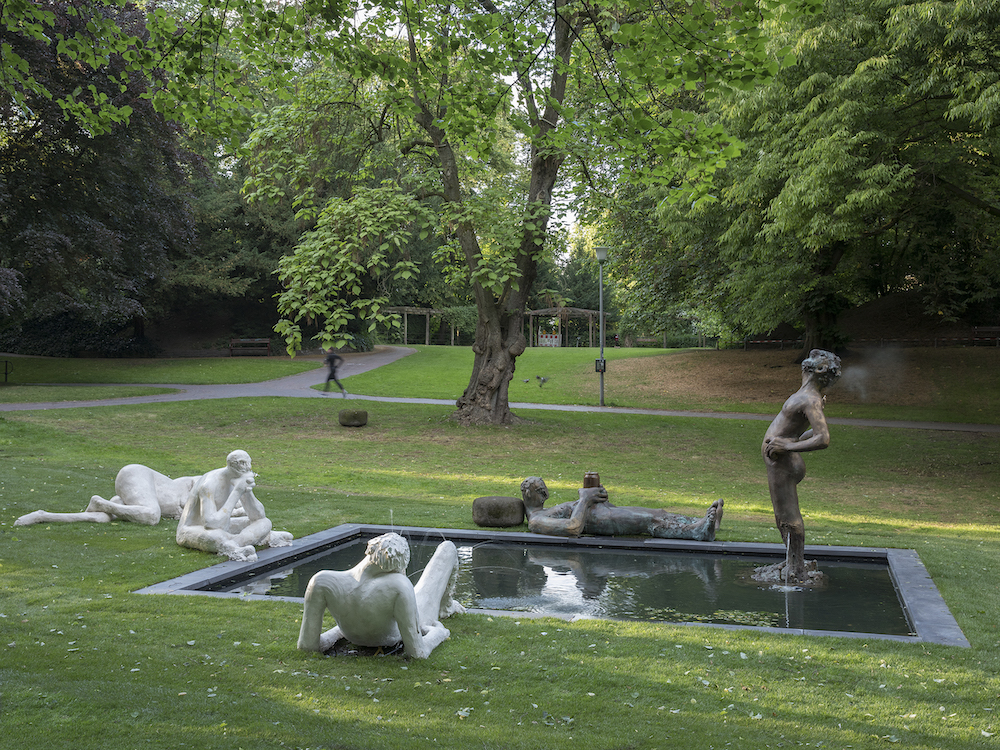 Nicole Eisenman’s Sketch for a Fountain (2017) in Münster.

Those cursedly lucky Bostonians! Not only do they hold the current championship titles in professional football and baseball, thanks to triumphs by the Patriots and the Red Sox, but they will also soon be able to enjoy a major public artwork by the great Nicole Eisenman.

The piece in question is Fountain, which features five charming bronze figures lounging in and around a shallow pool of water, and the plan is for it to be installed outside of 401 Park, a former Sears & Roebuck Co. building dating back to the 1920s that is being redeveloped by the real-estate firm Samuels & Associates into an office complex with a food hall and a public park. (The building is gargantuan, measuring almost 1 million square feet.)

The project is located in the Fenway neighborhood, not too far from the Museum of Fine Arts and the Isabella Stewart Gardner Museum, and the sculpture will be unveiled June 2.

A variant of Fountain was one of the stars of the 2017 edition of the Skulptur Projekte Münster, which occurs every 10 years in that tranquil German city. There, Eisenman showed Sketch for a Fountain, with two of the people in bronze and three in plaster.

The work was vandalized on more than one occasion, but locals took to the piece and began efforts in 2018 to acquire it permanently for a sum of €800,000 (about $901,000 today)—a reduced price that reportedly owed to Eisenman’s New York gallery, Anton Kern, waiving its fee, and the artist cutting hers.

Let us pause for a moment and celebrate that the real-estate firm decided to acquire a superb piece by one of our leading artists rather than build, say, a $150-million monstrosity as part of its development efforts. The curatorial adviser on the project was the firm Goodman Taft—made up of Abigail Goodman, Maria Taft, and Molly Epstein—who worked with Eisenman on the work’s placement.

“I’m happy to know the fountain will be situated in a place where people are likely to hang out and enjoy some leisure time,” Eisenman said in a statement. “I look forward to seeing kids climbing on the sculptures and this piece integrating into the fabric of life in the Fens.”

More good news: Fountain is an edition of four, meaning that there’s a chance that it one day could grace a pubic space near you.