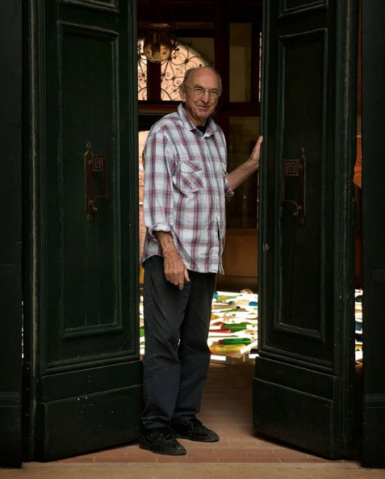 Bill Culbert at the entrance of the New Zealand Pavilion at the 55th Venice Biennale.

Bill Culbert, who was best known for vibrant paintings, installations, sculptures, and found objects that he made glow with fluorescent light, has died at age 83, according to Roslyn Oxley9 Gallery, which represented him in Sydney, Australia. The artist was also on the rosters of Hopkinson Mossman in New Zealand and Catherine Issert Galerie in France.

Culbert was born in Port Chalmers, a suburb of Dunedin, New Zealand, in 1935. He studied at the Canterbury University School of Art in New Zealand from 1953 to 1956, and went on to attend the Royal College of Art in London in 1957. Throughout his career, the artist had over 100 solo exhibitions at international venues such as the Musée des Beaux-Arts de Dole in France, Sue Crockford Gallery in Auckland, and PEER in London.

Culbert represented New Zealand in the 55th Venice Biennale in 2013, with an exhibition titled “Front Door Out Back.” Among his many commissions were the public sculptures Skyline (2000) for the Millennium Dome in London and Wallwave (2002) for PriceWaterhouseCoopers Tower in Auckland.