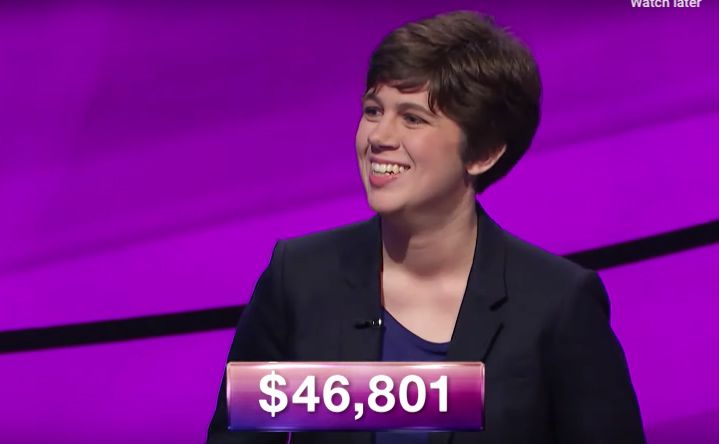 Who is Emma Boettcher?

That would be the correct question to: She’s the new champion of “Jeopardy!” after besting trivia titan James Houlzhauer.

“We are just so proud and excited for her,” Elisabeth Long, a supervising librarian at the University of Chicago, told NBC News moments after learning of her colleague’s big win.

For weeks, Boettcher’s co-workers knew she’d be on a “Jeopardy!” episode that was set to air on Monday.

Emma Boettcher is the new champion of “Jeopardy!”

But she never gave away the fact she’d be going up against an all-time “Jeopardy!” great — much less taking down the answer-and-question Goliath.

In recent days, “we realized she must be going up against him, and he just seemed unbeatable, he’s a machine,” Long said of Holzhauer.

“I thought, if anyone could do it, Emma can. She loves ‘Jeopardy!’ and I think has been preparing for this her whole life.”

Boettcher’s intense interest in the show goes back to at least her grad school days at the University of North Carolina, where she was honored for a master’s paper she did, based on “Jeopardy!” questions.

She took home the library school’s Elfreda Chatman Research Awardfor her work, “What is Difficulty?: Estimating the Difficulty of Fact-Finding Questions Using the ‘Jeopardy’ Archive.”

She examined the difficulty of answers and questions based on length of the clue, the syntax used and other factors.

But no matter how much training she had, beating Holzhauer was a massive challenge. Even a booster like Long wasn’t sure that Holzhauer, a native of nearby Naperville, Ilinois, could ever be vanquished.

“I started to prepare myself to think it’s an honor just to be on the show with” Holzhauer, Long said. “To think it’s much more than that is truly amazing.”

The 27-year-old Boettcher joined the famed Chicago school in August, 2016, after getting her master’s degree in information science at UNC and bachelor’s degree in English from Princeton University.

Boettcher is the university’s “user experience resident librarian,” a fancy way of saying she helps customers find new, more efficient ways of finding the books and information they seek.

In a profile of Boettcher on the school’s blog, it says, “Denizens of (the Joseph) Regenstein (Library) may recognize Boettcher as the librarian who frequently conducts user testing in the lobby.”

Boettcher wisely took the day off work on Monday and she declined comment through a “Jeopardy!” spokeswoman.

When word of her big win got to the Orange County Public Library in Hillsborough, North Carolina, Boettcher’s employer for 11 months in 2015-16, librarians there had to shush themselves.

“We’re all going to be jumping around for the rest of the day,” overjoyed librarian Kafi-Ayanna Allah told NBC News.

“She was great, I knew she was destined for great things, just (didn’t expect it to be on) TV,” Allah said.

Europe set for minor gains at the open as global markets bounce back
Buy Netflix stock for ‘unstoppable lead’ in streaming
To Top
error: Content is protected !!