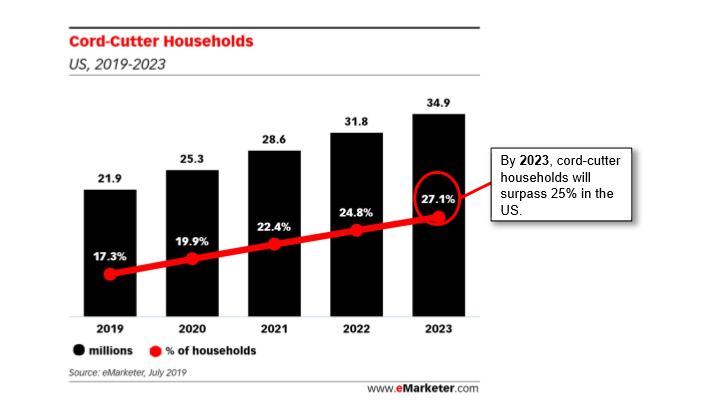 Cord cutting is on the rise in the U.S. and the trend isn’t about to change, according to eMarketer.

The market research company reported Tuesday that nearly 25% of households will ditch traditional television by 2022.

“As programming costs continue to rise, cable, satellite and telco operators are finding it difficult to turn a profit on some TV subscriptions,” Eric Haggstrom, an eMarketer forecasting analyst, said. “Their answer has been to raise prices across the board, and it seems that they are willing to lose customers rather than retain them with unprofitable deals.”

This year, around 19% of households have cut the cord with cable. Alternatives like Netflix, Hulu and Amazon Prime, which offer vasts amount of content for far less than cable subscriptions are a huge reason for the decline.

“As viewing time and the number of TV households drop, networks will have to sell ads at higher prices to account for lost viewership,” Haggstrom said. “This will become increasingly difficult to do over time. As a result, traditional TV networks such as Disney and NBCU are bulking up their direct-to-consumer digital offerings in order to regain lost viewers.”

However, it’s not all bad news for TV providers. Haggstrom noted these companies also offer broadband internet, usually as part of a bundled deal. Without a cable bundle, these companies can charge customers a higher price for internet and improve their own profit margins.

Shoppers have ‘no appetite’ for price hikes from tariffs