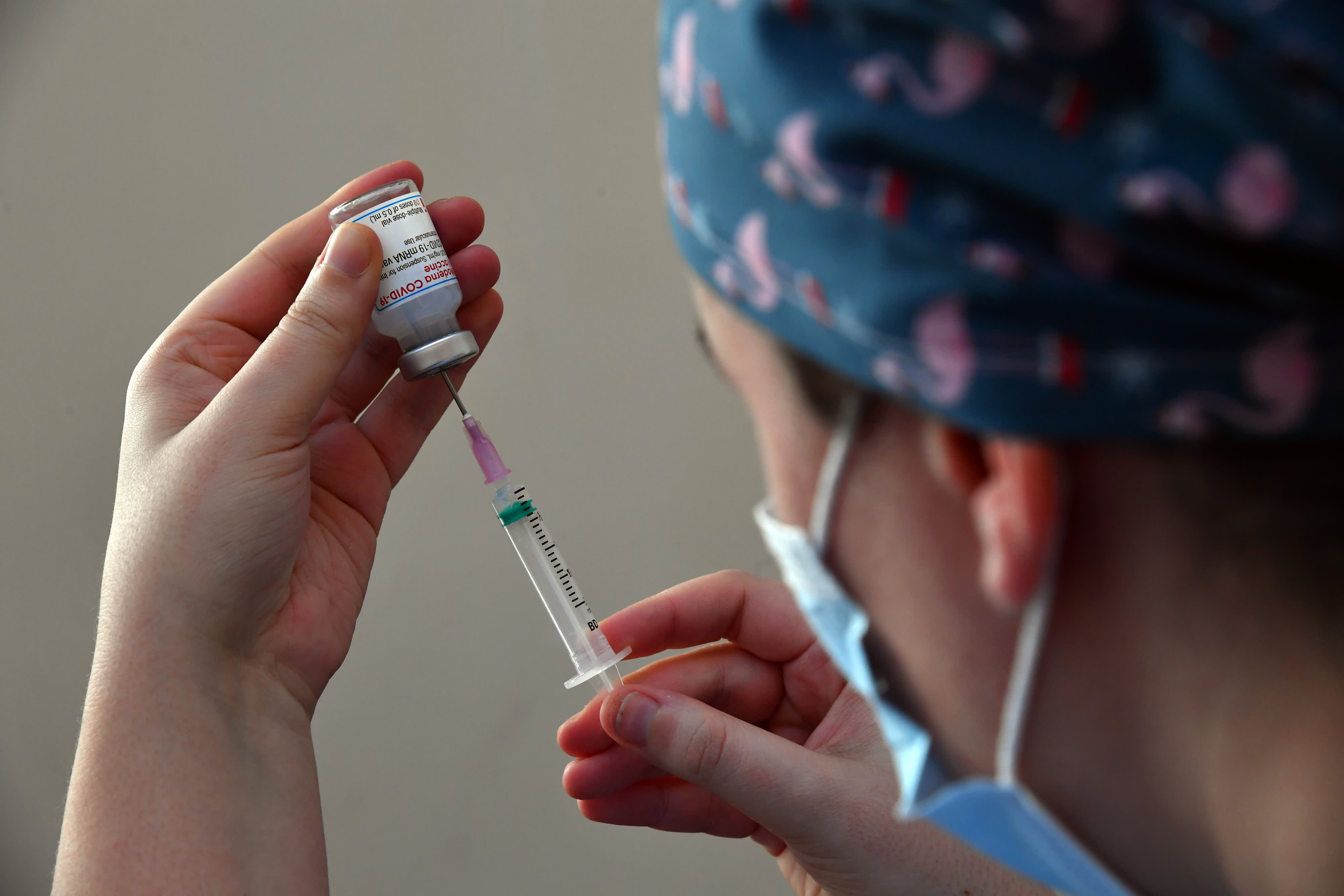 A health care worker prepares a dose of the Moderna Inc. Covid-19 vaccine at the Pacheco vaccination center in Brussels, Belgium, on Tuesday, Feb. 9, 2021.Geert Vanden Wijngaert | Bloomberg | Getty ImagesModerna said Tuesday its Covid-19 vaccine showed promise in a lab setting against coronavirus variants, including the highly contagious delta variant first identified in India.The two-dose mRNA vaccine produced neutralizing antibodies against delta as well as beta and eta, variants first found in South Africa and Nigeria, respectively, according to Moderna.The company said the results were based on the blood serum of eight participants one week after they received the second dose of the vaccine. The data hasn’t yet been peer reviewed. The results, while promising, may not reflect how the vaccines actually perform in real world scenarios against the variants.Shares of Moderna jumped more than 4% in intraday trading after it announced the lab results.”We remain committed to studying emerging variants, generating data and sharing it as it becomes available,” Moderna CEO Stephane Bancel said in a press release. “These new data are encouraging and reinforce our belief that the Moderna COVID-19 Vaccine should remain protective against newly detected variants.”Moderna’s update comes days after World Health Organization officials urged fully vaccinated people to continue to wear masks, social distance and practice other pandemic safety measures as delta spreads rapidly across the globe.It also comes the same day Moderna said its vaccine was authorized for use in India, where the delta variant is thought to be behind the large outbreak there. Delta, now in at least 92 countries, including the United States, is expected to become the dominant variant of the disease worldwide. In the U.S., the prevalence of the variant is doubling about every two weeks.WHO officials said Friday they are asking fully vaccinated people to continue to “play it safe” because a large portion of the world remains unvaccinated and highly contagious variants, like delta, are spreading in many countries, spurring outbreaks.The comments were a departure from the Centers for Disease Control and Prevention, which has said fully vaccinated Americans can go maskless in most settings.”People cannot feel safe just because they had the two doses. They still need to protect themselves,” Dr. Mariangela Simao, WHO assistant director-general for access to medicines and health products, said during a news briefing.Authorized vaccines from Moderna, Pfizer-BioNTech and Johnson & Johnson have demonstrated to be highly effective in preventing Covid, especially against severe disease and death.Some variants, including delta, have shown to make the vaccines slightly less effective and WHO officials said they worry vaccinated individuals could become part of transmission chains.The Wall Street Journal reported Friday that about half of adults infected in an outbreak of the delta variant in Israel were fully vaccinated with the Pfizer vaccine, prompting the government there to reimpose an indoor mask requirement and other measures.In the U.S., President Joe Biden warned that unvaccinated people are especially at risk of becoming infected with delta.He said Covid deaths nationwide will continue to rise due to the spread of the “dangerous” variant, calling it a “serious concern.””Six hundred thousand-plus Americans have died, and with this delta variant you know there’s going to be others as well. You know it’s going to happen. We’ve got to get young people vaccinated,” Biden said Thursday at a community center in Raleigh, N.C.

Get as many Didi shares as you can after the Chinese ride-hailing giant goes public, Jim Cramer says
Serena Williams out after suffering ankle injury during first-round match
To Top
error: Content is protected !!