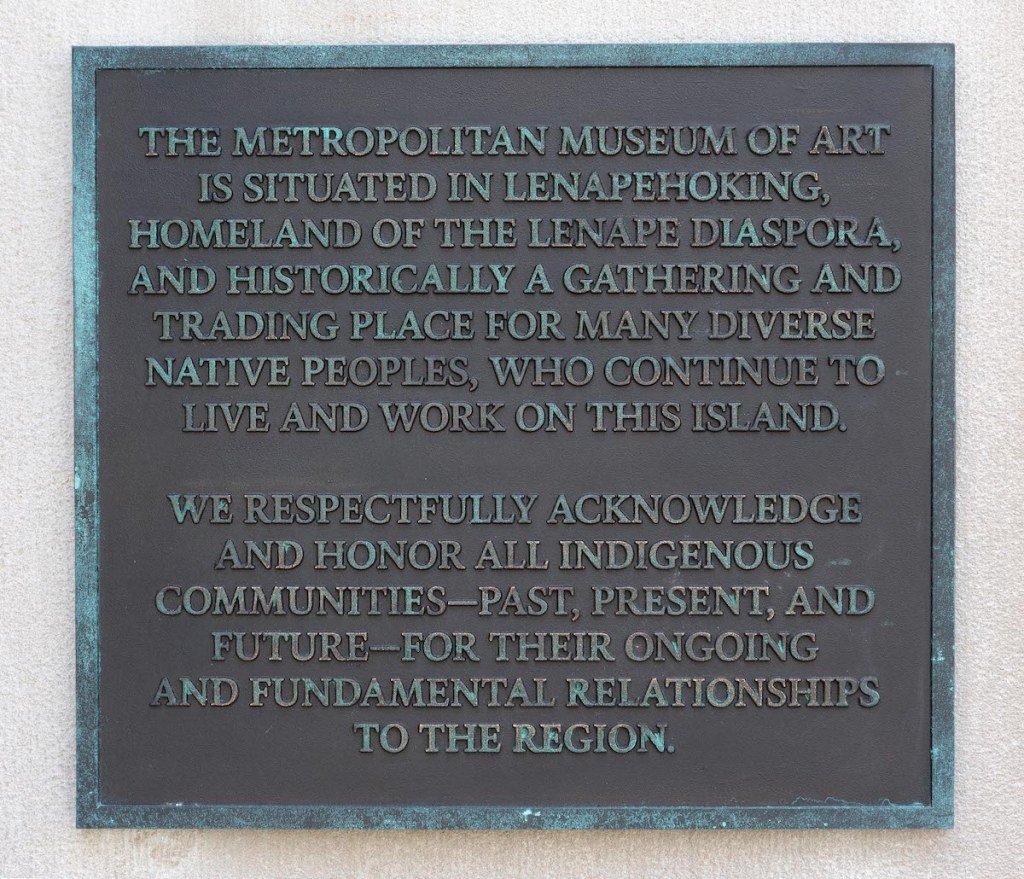 The Metropolitan Museum of Art in New York has added a bronze plaque recognizing Lenapehoking, the homeland of the Indigenous Lenape diaspora, on the facade of its Fifth Avenue building. The institution is also working on a land acknowledgement for the Met Cloisters in Fort Tryon Park in northern Manhattan.
The bronze plaque installed at the Met reads: “The Metropolitan Museum of Art is situated in Lenapehoking, homeland of the Lenape diaspora and historically a gathering and trading place for many diverse Native peoples, who continue to live and work on this island. We respectfully acknowledge and honor all Indigenous communities—past, present, and future—for their ongoing and fundamental relationships to the region.”

Land acknowledgements are common at institutions in New Zealand and Australia, where presentations of Indigenous art form a key component of certain museums’ programming. But they are less frequent at institutions in the United States.
Few other New York museums have undertaken such a measure. On its website, the New Museum has posted a text that it is situated on “unceded Indigenous land, specifically the homeland of the Lenape peoples,” and in 2018, as part of a posting for a New Red Order performance, the Whitney Museum wrote a similar acknowledgement.
There are signs that the Met is working to alter how it presents Indigenous art. The Met recently unveiled the first major reinstallation of works in “Art of Native America: The Charles and Valerie Diker Collection,” an ongoing presentation overseen by the museum’s first full-time curator of Native American art, Patricia Marroquin Norby (Purépecha).
Norby and Sylvia Yount, curator in charge of the American wing, wrote in an article on the Met’s website, “It’s critical for the Met to reckon thoughtfully with our institutional legacy and its ongoing impact on local lands and waters, as well as the lives of the original communities, to evolve into the cultural institution that we aspire and need to be for the region, the nation, and the world.”

Daniel H. Weiss, president and CEO of the Met, said in a statement, “This acknowledgement is an important part of the Met’s commitment to build and maintain respectful relationships with Indigenous communities. It is also a meaningful reminder to all who walk through the museum’s front doors of the history and legacy of the land on which the Met now sits and the ties to this area that Indigenous communities sustain.”

Change at the National Gallery of Art, Beijing’s X Museum Adds Mexico City Satellite, and More: Morning Links from May 14, 2021
Mary Beth Edelson, Feminist Artist Who Envisioned Women as Goddesses, Has Died at 88
To Top
error: Content is protected !!