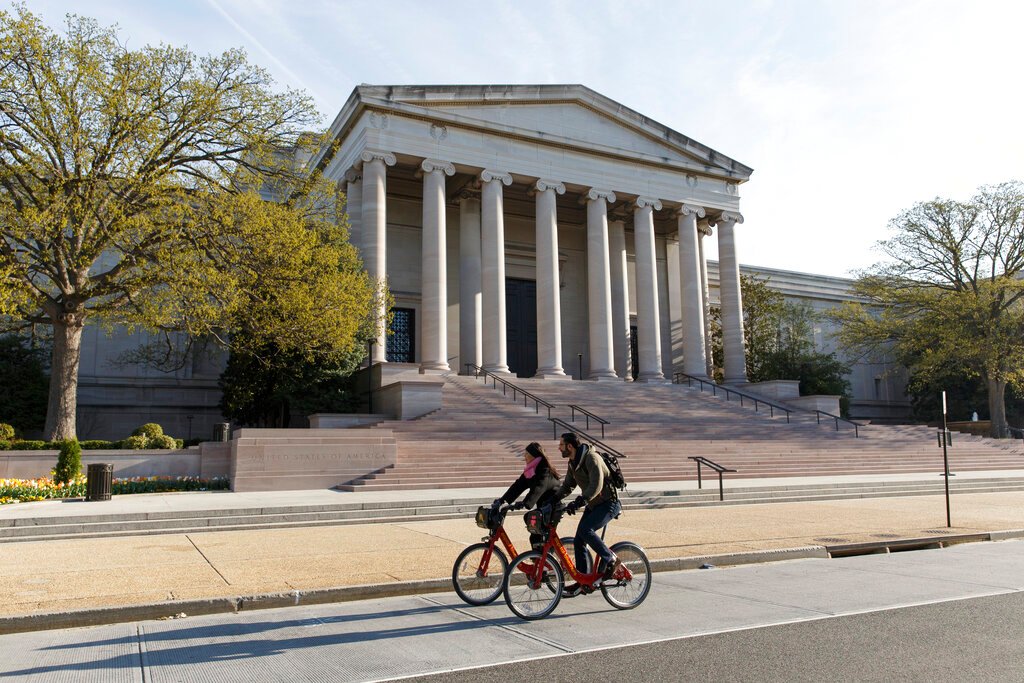 To receive Morning Links in your inbox every weekday, sign up for our Breakfast with ARTnews newsletter.
The Headlines
THE NATIONAL GALLERY OF ART REOPENS IN WASHINGTON, D.C., TODAY, and it has gone on a full-court media press. The big news is that it has hired a chief curator, E. Carmen Ramos, who will be the first woman and the first person of color to hold the position. A Latinx art expert, Ramos is coming from the Smithsonian American Art Museum, where she is acting chief curator. The NGA has also unveiled a colorful new brand identity. “We want to preserve the weight and dignity and gravitas of the gallery and make it more warm and contemporary,” its director, Kaywin Feldman, told the Washington Post. Amid the repackaging talk, Feldman also touted her record over the past two years on the job. “I inherited a leadership team that was 100 percent white, and now it’s 57 percent people of color,” she said in an interview with the New York Times.

FOR A CASE STUDY IN HOW DIFFICULT IT CAN BE to recover work that was allegedly looted by the Nazis, consider a lawsuit filed in federal court in Georgia this week. As the New York Times reports, more than a dozen heirs of a couple whose Pissarro painting was reportedly stolen by the Nazis are demanding its return from an Atlanta foundation, or the family associated with it. (The whereabouts of the work are unclear.) On a previous occasion, the respondents denied that the heirs are the rightful owners of the piece. To make the story more complicated, there is also a Swiss foundation that claims to be the legal heir of the late couple. The painting is said to be worth up to $1 million.
The Digest
Lulu, the beloved Mexico City art space cofounded by artist Martin Soto Climent and curator Chris Sharp, will not be closing, though that was the plan when Sharp recently opened a gallery under his own name in L.A. Collector Michael Xufu Huang’s X Museum in Beijing has decided to take it on as a nonprofit satellite. Sharp will organize three shows a year, with a fourth going to a Chinese artist selected through an open call. [Artnet News]
In 1967, the future art critic Dave Hickey was on the verge of defending his dissertation art the University of Texas at Austin when he decided he wanted to open a gallery instead. And so, “I put on my nice glen-plaid suit, went down to the bank, and borrowed ten thousand dollars,” he once said. Hickey biographer Daniel Oppenheimer looked back at that storied enterprise, A Clean Well-Lighted Place. [Texas Monthly]

Speaking of UT-Austin, a permanent commission from the artist Sarah Oppenheimer will go on view there later this year. Oppenheimer, who was born in Austin, is known for optically intricate sculptures and site-specific installations. For now, she is declining to release renderings of the piece. [The Art Newspaper]
Heavy metal maven Alice Cooper is parting with his Andy Warhol Little Electric Chair (1964) through a dealer in Scottsdale, Arizona. “This silkscreen was given to me during some crazy years and I had completely forgotten I even owned it,” he said in a statement. [ARTnews]
RR Auction in Boston is hosting an auction of material related to physicist Albert Einstein, including a letter in which he wrote his legendary equation: “E = mc2.” [Press Release/Art Daily]
The Kicker
ART COLLECTOR AND FASHION MOGUL YUSAKU MAEZAWA, who famously spent $110.5 million on a Basquiat, has booked a trip to the International Space Station in December in a Russian capsule, the Associated Press reports. He’s the first private individual to pay for the trip in more than a decade, apparently. In a statement, Maezawa said, “I’m so curious, ‘What’s life like in space?’ So, I am planning to find out on my own and share with the world.” He has also signed on to cruise around the moon via Elon Musk’s Starship. That trip is scheduled for 2023.
Thank you for reading. We’ll see you tomorrow.