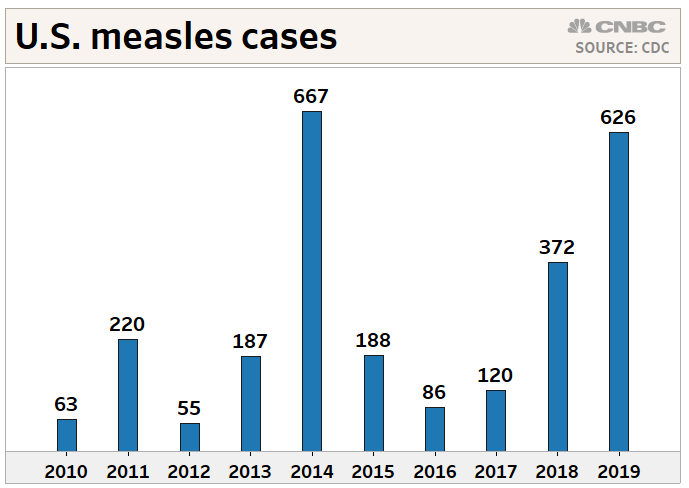 Measles has now been confirmed in 22 states, the CDC said. Of the 71 new cases, 68 were in New York, with 53 from New York City and 15 in Rockland County, the agency said. In both areas, health officials have declared public health emergencies and are scrambling to vaccinate people.

New York City issued a mandate on April 9 requiring residents in parts of Brooklyn to get vaccinated against measles, mumps and rubella or face a $1,000 fine. It also closed a Jewish school that allegedly refused to provide vaccination records.

Rockland County and New York City are home to large Orthodox Jewish populations, where some people have refused to vaccinate their children. Jewish Orthodox nurses are trying to debunk misinformation they say people against vaccinations have spread through these communities.

Receiving both recommended doses of the MMR vaccine is 97% effective in preventing the measles, according to the CDC. Measles is highly contagious, infecting 90% of unvaccinated people who are exposed to the disease, the CDC said.

That’s why health officials are bracing themselves for an uptick in cases after Passover, a Jewish holiday, ends Saturday.

The Food and Drug Administration in a statement Monday reiterated the MMR vaccine is safe and effective.

“We cannot state strongly enough – the overwhelming scientific evidence shows that vaccines are among the most effective and safest interventions to both prevent individual illness and protect public health,” Peter Marks, director of FDA’s Center for Biologics Evaluation and Research, said.

WATCH: What the FDA commissioner wants you to know about the measles vaccine