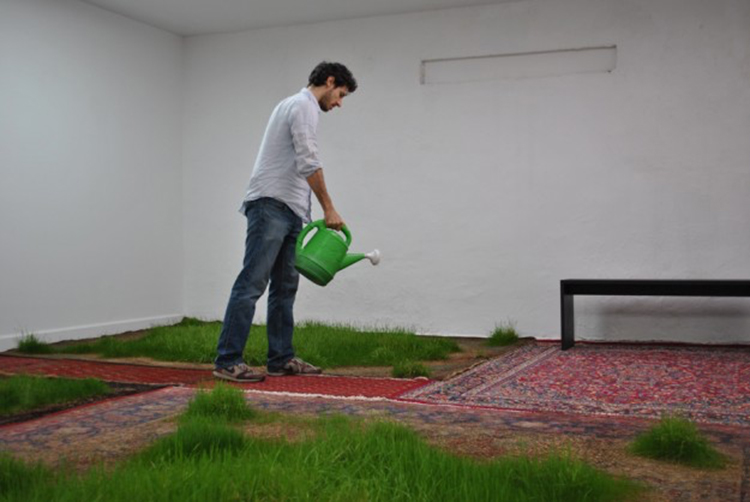 Martin Roth at the former Louis B. James Gallery in New York.

The artist Martin Roth, whose work often enlisted living organisms such as plants, birds, and snails in settings suffused with stories to tell, was found dead of unknown causes last week at his home in New York. He was 41 years old.

News of his passing was announced by Yours, Mine & Ours, the since-shuttered gallery on New York’s Lower East Side that last year exhibited Roth’s installation In November 2017 I collected a plant from the garden of a mass shooter, which centered on a succulent pulled from the rock-strewn lawn of the shooter responsible for the murder of 58 people at an outdoor concert in Las Vegas in 2017. The plant, a desert holly, lived in the gallery in a glass terrarium, and a reproduction of the carpeting in the hotel-casino where the shooter stayed covered the floor, as a remnant of the last thing he would have seen. (Roth incorporated an image of the plant—a sign of life and perseverance in the midst of such madness—as an extra element in the carpet’s pattern.) 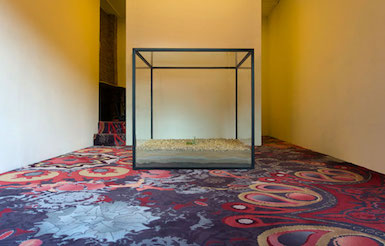 Installation view of Martin Roth’s n November 2017 I collected a plant from the garden of a mass shooter.

COURTESY YOURS, MINE & OURS

Downstairs in the gallery’s basement, the floor rumbled by way of machinery hidden beneath gravel in timed increments corresponding with the rate of shootings that occur in the United States. During the exhibition’s run, Roth also sold lapel pins shaped like a desert holly to raise money for Coalition Z, a nonprofit started by the activist Alex Lehman to engage Generation Z in political organizing around gun violence and other issues.

Roth was born in 1977 in Graz, Austria, and stayed in New York after earning a master’s degree from Hunter College in 2011. He currently has a work featuring live worms in earth enclosed in a glass frame on view in “Flat Out: Drawings, 2000–2019,” a group exhibition at Mana Contemporary in Jersey City, New Jersey. And last week, a Kickstarter campaign was launched by Strongroom, an arts organization devoted to site-specific installations, to raise $6,000 to create a project devised by Roth in homage to Andrew Jackson Downing, a noted landscape designer, in the ruins of an old house in upstate Newburgh, New York. 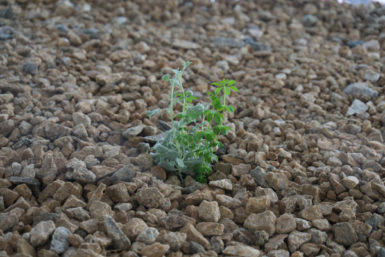 The desert holly in Martin Roth’s In November 2017 I collected a plant from the garden of a mass shooter.

COURTESY YOURS, MINE & OURS

In a 2017 interview with The Creative Independent, Roth spoke of starting out as a painter as a student but changing course to work with nature early on. “People would often look at paintings and talk about the energy within the work, but for me that always felt like it was missing something,” he said. “By working with something that was living, changing, growing, I felt like there was actual energy in the work.”

Work in that vein evolved to entailed activities like growing grass on Persian rugs inside Louis B. James Gallery in New York in 2012 and, a year earlier, releasing a goldfish in the Chinese Court Garden at the Metropolitan Museum of Art. For a 2016 show at Dittrich & Schlechtriem gallery in Berlin, Roth nurtured snails living inside what looked like a Donald Judd stack sculpture hanging on a wall.

RJ Supa, a co-owner of Yours, Mine & Ours who also worked with Roth at Louis B. James Gallery, told ARTnews, “Martin was one of the best artists I ever had the pleasure of working with. He was an uncompromising perfectionist, moving one rock from this corner to that corner in order to achieve exactly what it was he was looking for, and the success of each exhibition was due to his perfectionism. The shows, on a shoestring budget, were always received as dynamic and exhilarating social commentary, emerging masterworks from a talent gone too soon. His talent and vision will be deeply missed.”

About the effects of his art, Roth said in the interview with The Creative Independent, “For a lot of people, nature is an app or something that they listen to in order to fall asleep, a digital recording of a rainforest or something. My work creates a strong reaction, because, of course, you don’t believe that grass or trees or lavender could live inside a gallery.”