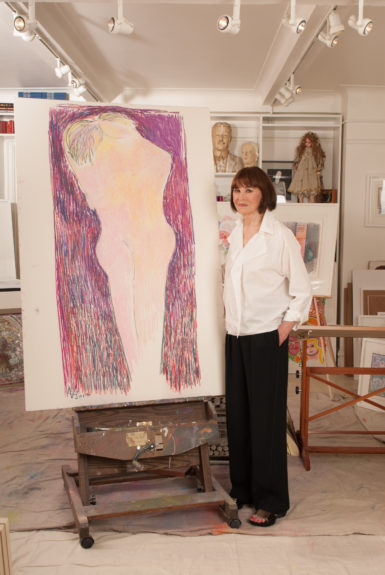 Gloria Vanderbilt in her studio beside Together Alone in the Unknowable Night, 2014.

Vanderbilt was born in 1924 to Reginald Claypoole Vanderbilt and Gloria Morgan Vanderbilt. She spent a portion of her childhood under the guardianship of her aunt, Whitney Museum founder Gertrude Vanderbilt Whitney, who sued for and won custody of Gloria when she was 10 years old.

Though she is perhaps best known for her line of jeans and women’s apparel, which was established in the 1970s and grew into a multimillion-dollar business, Vanderbilt also produced ethereal, enigmatic paintings, works on paper, and installations. Having begun making art while in boarding school as a child, she later studied at the Art Students League of New York, and also worked for some time as a studio model, posing for artists John Carroll, René Bouché, and Marcel Vertes. She exhibited her artworks at Hammer Galleries and 1stdibs in New York, and at the Southern Vermont Arts Center in Manchester.

Among Vanderbilt’s best-known pieces are Truman (1956), a portrait of writer Truman Capote, who appears dressed in yellow and flanked by what look like small lemon trees; Anderson Hays Cooper (1975), which shows her son surrounded by text reading “tall,” “brave,” and “wise”; and 60 Washington Mews (2012), a depiction of Gertrude Vanderbilt Whitney’s living room.

On the occasion of the opening of her 2014 show at 1stdibs, which was called “The Left Hand is the Dreamer” and took place around the time of her 90th birthday, Vanderbilt told W Magazine, “In mythology and palmistry, the left hand is called the dreamer because the ring finger on the left hand leads directly to the heart. I find it a very poetic idea. And that’s why I only wear nail polish on my left ring finger.”

In the same interview, she talked about a collage of hers called Fat Girl Taking a Walk. “Many times working is kind of like channeling and I really don’t know what’s going to fall on the page. I just did this image of a fat girl and put her on a tiny mountain peak of grass that she’s walking over. It just amused me.”

The slideshow below includes works from Vanderbilt’s 2016 exhibition at 1stdibs in New York.