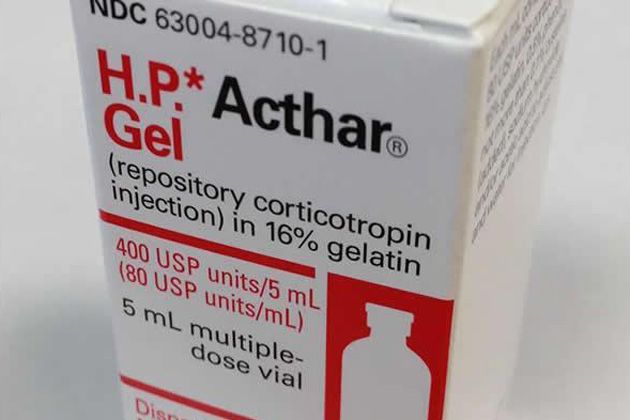 HP Acthar made by Mallinckrodt Pharmaceuticals is an anti-inflamatory medicine used by multiple sclerosis patients.

Shares of pharmaceutical company Mallinckrodt seesawed Wednesday after it announced a tentative deal with the U.S. Justice Department to settle a drug bribery probe into Questcor Pharmaceuticals, which it acquired in 2014.

Mallinckrodt said it expects to pay $15.4 million to the DOJ after two whistleblower lawsuits claimed Questcor bribed doctors to prescribe its popular drug H.P. Acthar Gel. The suits also claimed Questcor defrauded Medicare by illegally marketing the drug, which is used for treating multiple sclerosis and seizures in children.

The company’s shares jumped as much 8.5% on the news before tumbling by more than 3% in intraday trading.

Mallinckrodt General Counsel Mark Casey said in a statement that the company looks forward to finalizing its agreement with the government relating to Questcor’s sales and marketing activities.

“As we have said repeatedly, where we can resolve legacy legal matters in a reasonable and manageable way, we will do so,” Casey said in a statement. “Unfortunately, that has not been possible to date regarding the allegations relating to Questcor’s charitable foundation activities, despite what we believe was lawful and appropriate activity. We are confident that the litigation process will focus the contested issues and be a productive step in reaching resolution.”

Used for treating multiple sclerosis and seizures in children, H.P. Acthar Gel accounted for 35% of Mallinckrodt’s net sales in 2018.

The Department of Justice did not immediately respond to CNBC’s request for comment.

This story is developing. Check back for updates.