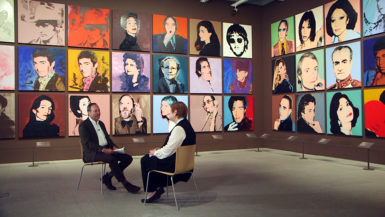 At a moment when news organizations across the country are cutting arts coverage as the result of a tough financial landscape, one prominent outlet is going in the opposite direction.

Supported by a $1.7 million gift from the John S. and James L. Knight Foundation, PBS NewsHour said it will expand its broadcast and digital arts reporting initiative, Canvas. Today, the television program launched a Canvas website where audiences can engage with content from its channels.

In addition, Canvas has relaunched its Twitter account and created a new Facebook group, allowing viewers to interact with one another and discuss programming. These platforms, along with the new website, will provide opportunities for NewsHour to use augmented reality and other technologies in its presentations of artworks.

Upcoming offerings on Canvas include a tour of singer and guitarist Dan Auerbach’s recording studio in Nashville and a look at a blues music festival in Clarksdale, Mississippi.

Victoria Rogers, the Knight Foundation’s vice president for arts, said in a statement, “This initiative raises the visibility of artists working across the U.S., north to south and east to west, in cities large and small. Through its iconic national programming and expanded digital presence, PBS NewsHour’s Canvas elevates art as national news, bringing arts directly to millions of people on their screens big and small.”

MOCA Jacksonville Names Ylva Rouse Exhibitions Curator -ARTnews
Which Mega-Gallery Took on the Most Artists Over the Past Three Years? -ARTnews
To Top
error: Content is protected !!