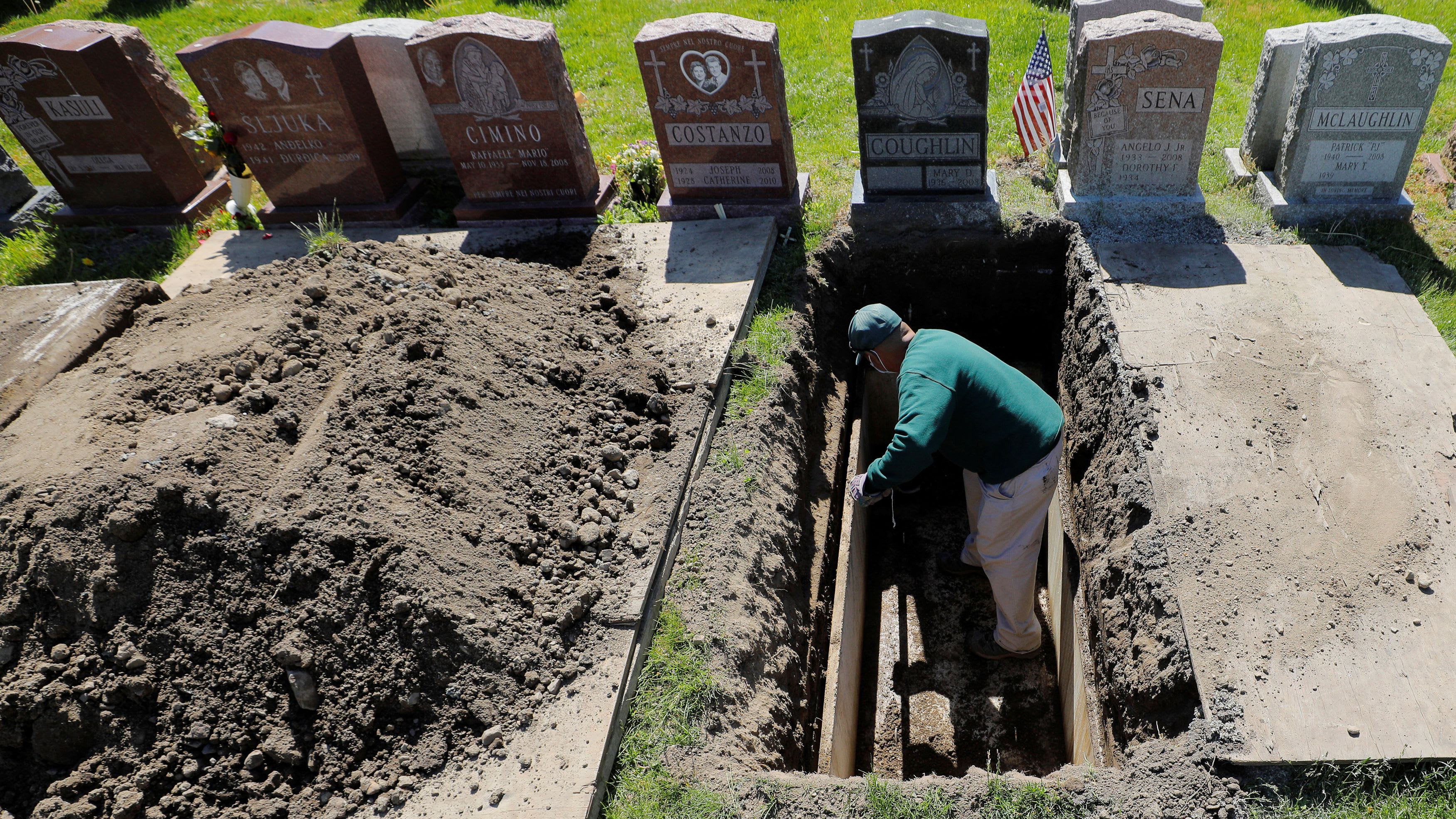 Roberto Arias prepares a grave for burial at Woodlawn Cemetery during the coronavirus disease (COVID-19) outbreak in Everett, Massachusetts, U.S., May 27, 2020.Brian Snyder | ReutesThe U.S. will top more than 410,000 Covid-19 deaths by the end of the year as the country heads into the fall and winter, according to a new forecast from the Institute for Health Metrics and Evaluation at the University of Washington.Covid-19 has already killed at least 186,800 people in the U.S., according to data compiled by Johns Hopkins University. The model by IHME, whose models have previously been cited by the White House and state officials, forecasts that the death toll will more than double by Jan. 1 and could reach as high as 620,000 if states aggressively ease coronavirus restrictions and people disregard public health guidance.”The worst is yet to come. I don’t think perhaps that’s a surprise, although I think there’s a natural tendency as we’re a little bit in the Northern hemisphere summer, to think maybe the epidemic is going away,” Dr. Christopher Murray, director of IHME, told reporters on a conference call Friday.In June, IHME predicted that the death toll in the U.S. would reach 200,000 by October, which appears to be on track. Some epidemiologists and mathematicians, however, have criticized IHME for making predictions too far into the future. IHME previously projected 317,697 deaths by Dec. 1. The model now predicts that the daily death toll could rise to nearly 3,000 per day in December, up from over 800 per day now, according to Hopkins data.IHME released three new projections based on different assumptions: a worst-case scenario, a best-case scenario and a most likely scenario. The most likely scenario estimates that Covid-19 will kill 410,450 people in the U.S. by Jan. 1. The worst-case scenario, which assumes that restrictions and mask directives will ease, projects up to 620,028 people in the U.S. will die by then and the best-case scenario, which assumes universal masking, predicts that 288,380 people in the U.S. will die from Covid-19 in 2020.Government policies and compliance among the public will largely determine how many people die of Covid-19 this fall and winter, Murray said. He added on a call that he believes there is a seasonal element to the virus, as with other coronaviruses, and that it will spread more easily in the colder Northern climates later in the year. “We are facing the prospect of a deadly December, especially in Europe, Central Asia, and the United States,” Murray said in a statement. “But the science is clear and the evidence irrefutable: mask-wearing, social distancing, and lmits to social gatherings are vital to helping prevent transmission of the virus.”On a call, Murray added that widespread mask use likely won’t be enough to drive down spread of the virus in the fall and winter. He said the question, from a policy perspective, is what kind of social distancing restrictions will be most effective, and there’s not enough public data to answer that question, he said.Daily new cases of Covid-19 in the U.S. have fallen since they peaked in late July at more than 70,000 new cases per day. However, daily new cases appear to have plateaued again at over 40,000 new cases per day, a level of pervasive spread that top health officials have said is worrying headed into the fall. Despite the drop in new cases, the number of deaths caused by Covid-19 everyday in the U.S. has remained high, at nearly 1,000 new deaths per day, according to data compiled by Johns Hopkins University.Murray said daily new cases, both globally and in the U.S., may continue to plateau or even drop through September, but they will likely rise come October.The group projects the global death toll, which currently stands at 869,600, will rise to roughly 2.8 million by Jan. 1. The best-case scenario — where there’s widespread adoption of masks and other safety precautions — forecasts a worldwide death toll of more than 2 million. The worst case scenario predicts 4 million cumulative global deaths by the end of the year.IHME’s latest forecast is based on the assumption that cooler weather in the Northern hemisphere will have people spending more time indoors where the coronavirus more easily spreads, keeping the death toll high.”People in the Northern Hemisphere must be especially vigilant as winter approaches, since the coronavirus, like pneumonia, will be more prevalent in cold climates,” Murray said.Youyang Gu, a data scientist who runs a competing Covid-19 forecasting model called Covid-19 Projections, said he’s skeptical of IHME’s latest projections because they extend too far into the future. IHME and Gu’s model are both used by the Centers for Disease Control and Prevention to forecast the trajectory of the pandemic. The CDC gathers projections from dozens of major modelling groups and creates their own “ensemble forecast.”The CDC’s most recent forecast, published on Thursday, projects that “deaths may decrease nationally over the next four weeks, with 3,300 to 7,500 new deaths reported during the week ending September 26.” It does not provide projections beyond that week.IHME’s model predicts further out than most of its peers used by the CDC, Gu said. His own model estimates that there will be 220,300 total deaths by Nov. 1. He does not estimate beyond that because it would be “irresponsible,” he said.”There’s just so much uncertainty… There are too many variables going on and no one really can know for sure what’s going to happen,” he said in a phone interview. “There is just really no data to work off of for a winter season.”