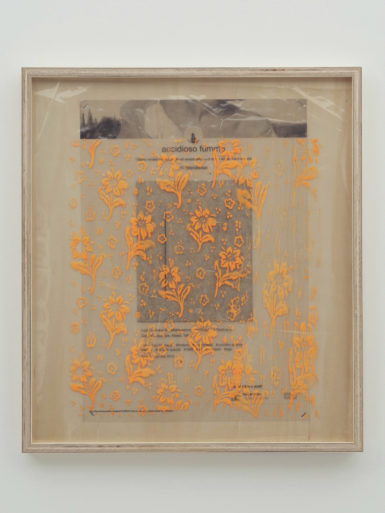 All over the market landscape, alternatives to behemoth art fairs have been cropping up recently. In May, the booth-free Object & Thing show opened in Brooklyn, and in February, Felix LA revived the scrappy hotel-fair model with a relatively modest number of dealers. The latest experiment is June, an exhibition platform set to run from June 11 to 14 in Basel, Switzerland, during Art Basel and Liste.

Cofounded by Esperanza Rosales, the director of VI, VII in Oslo and Christian Andersen, who owns an eponymous Copenhagen gallery, June will bring together 14 international enterprises—including Midway Contemporary Art (of Minneapolis), Stigter van Doesburg (Amsterdam), and Mitchell Algus Gallery (New York)—at Riehenstrasse 90B, just a few minutes away from Art Basel’s main site, in a building designed by the hometown architects Herzog & de Meuron. The structure has previously served as a storage facility for the architects, and it once housed the now-shuttered Freymond-Guth Gallery.

In an interview with ARTnews, Rosales said that the impetus for June came from conversations with other dealers, many of whom “were eager to see their galleries in Basel, represented in a new context.”

She explained that June differs from the long-running Basel enterprises, the blue-chip Art Basel and the emerging-oriented Liste, in that it is more an exhibition than a fair. Organized in a largely open plan format, June eschews many of the categorizations that tend to divide exhibitors in larger fairs.

“Concepts like ‘young gallery’—when does that stop being applied?” she asked. “How many fairs must one do before that stops being true?”

“We’re hoping to create something that feels closer to everything that we do in the gallery, which is to make exhibitions,” Rosales said. “Lots of effort has been put into making this possible, but it still feels joyous and lightweight.”

In what Chris Sharp, cofounder of Mexico City’s Lulu, characterizes as a “grass roots structure,” many participants assisted Rosales and Anderson in planning the event. Sharp told ARTnews that it was “a group effort in every respect,” from reaching out to press to calling collectors.

Other dealers exhibiting at June also noted its collaborative ethos. Hannah Hoffman, who will return to Basel for the first time in about four years (she showed in the Statements section at Art Basel in 2015) with works by the artist D’Ette Nogle and the late Belgian poet Marcel Broodthaers, told ARTnews that June “gives both the artists and gallerists an opportunity to think really expansively about how to organize a presentation.” She added, “Because it’s small, there seems to be a sense of community.”

Meanwhile, the Tokyo outfit Misako & Rosen will make its Basel debut at June, showing pieces by Yuki Okumura and Hisachika Takahashi. Cofounder Jeffery Rosen said he sees “the extent to which galleries prioritize the cultural side of their businesses” as a common thread among the participants in the exhibition.

“There has to be a space carved out for commercial spaces that are focusing on their exhibition programs first and foremost and finding contexts outside of their home base to present that programming,” he said.

Though he won’t be traveling to Basel for the exhibition, New York artist and dealer Mitchell Algus will present his own art, as well as a film titled Justine and the Boys—featuring appearances by Jeff Koons and Richard Prince, among others—by the multifarious artist Colette.

Algus, who has critiqued art fairs and their deleterious effects on galleries’ business, praised Rosales and Anderson for their efforts to create a new model in which “the art has to make a case for itself rather than the gallery making the case for the art.”

“I’m thrilled that they asked me [to participate] and I admire their perseverance, but I have to put all of my energy into the program here,” Algus said of his decision to remain home during the event. “That’s all I can afford to do.”