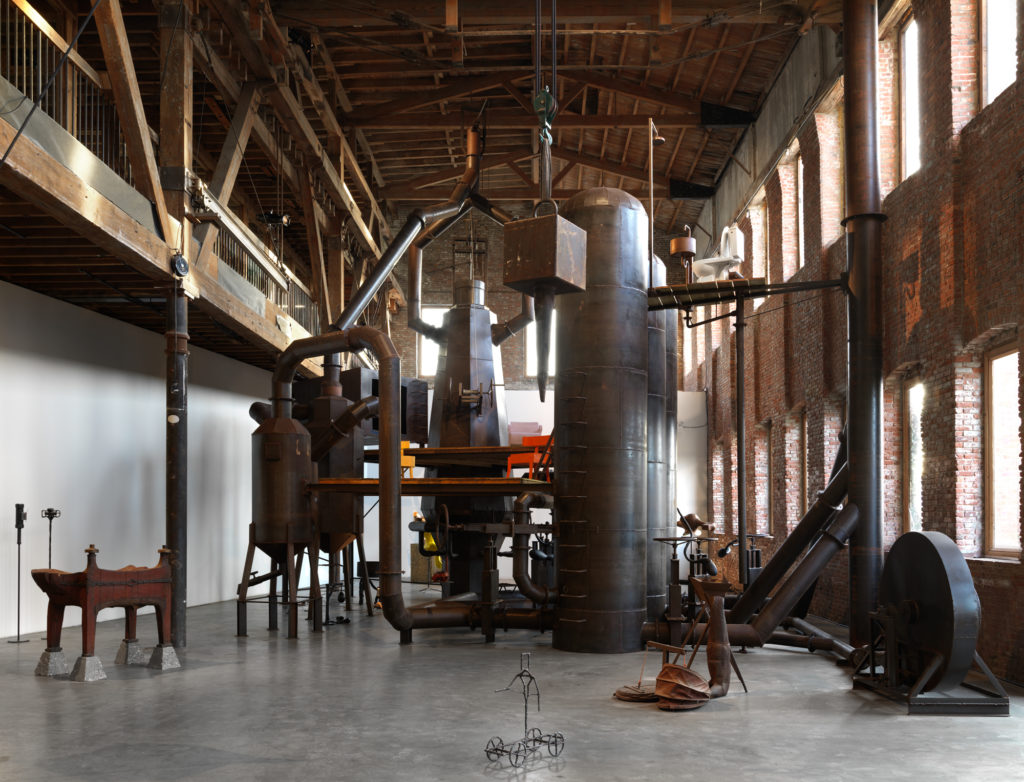 On a recent spring day, two flatbed trucks carrying 90 components of a single artwork traveled from Brooklyn to Ghent, New York, in the Hudson River Valley. The destination of the dissembled Blast Furnace, created by Atelier Van Lieshout in 2013, was the nonprofit Art Omi’s sculpture park, where it will remain on view for two years, beginning May 25.

The 40-foot-tall, multi-level steel installation weighs about ten tons (that’s 20,000 pounds), and it was most recently shown at Pioneer Works as part of the sculptor Joep van Lieshout’s exhibition “The CryptoFuturist and The New Tribal Labyrinth,” curated by Natalie Kovacs and Gabriel Florenz. Five installers at Art Omi are reconstructing Blast Furnace—which is held together by 650 nuts and bolts—this week with the help of a crane, forklift, and cherry picker.

Unlike many of its previous appearances, Blast Furnace will be presented outdoors at Art Omi, among 60 other sculptures on display for the season. “Indoors it looks much more like an installation in which you can walk and find your way,” van Lieshout told ARTnews, “and when you put it outside it becomes more like a sculpture itself instead of an installation.”

The piece was inspired by the machines of the Industrial Revolution, though it also features domestic elements, including a kitchen, bathroom, and bedroom. It’s part of the artist’s “New Tribal Labyrinth” series wherein he imagines a fictional tribe’s return to early modes of production and labor.

“On one hand it’s kind of a utopia creating your own products [with the machine], on the other hand it’s a very harsh environment with a lot of repetitive labor,” he explained.

Whether Blast Furnace will be exhibited as an interactive sculpture at Art Omi, as it has in other settings, remains undecided. In a conversation with ARTnews, Jessica Puglisi, communications director at the arts center, cited safety concerns related to the work, noting that docents cannot monitor the installation at all times. But performances involving Blast Furnace are in the works, and Art Omi may instate specified periods of permitted interactivity for visitors.

Regardless, Kovacs is “just glad that a part of the exhibition gets to have another life.”

“It looks like a human body in some ways,” she said. “Most of Joep’s sculptures contain an element of humanity even if they’re really dystopian.”