A potent combination of record-setting Pop art masterworks and a stainless steel rabbit sculpture by you-know-who drove Christie’s postwar and contemporary evening sale in New York on Wednesday night to a sizzling $539 million finish, in-between pre-sale expectations of $422.3 million to $605.2 million. (Estimates do not include the buyer’s premium.)

Just five of the 56 lots offered failed to sell, for a wafer-thin buy-in rate by lot of nine percent, and 47 of the 51 sold lots made over $1 million. Ten made over $10 million, and and three went over $50 million. Seven new artist records were set.

The evening’s result vaulted past last May’s $397.2 million total on 58 lots sold, led by Francis Bacon’s Study for Portrait (1977), which made $49.8 million. It takes up position as the sixth-highest mark for an evening sale in history for this category.

In terms of pre-arranged financial guarantees, 16 involved third-party support, through which the backer receives a financing fee for the risk taken, and one was a standalone guarantee from the auction house. 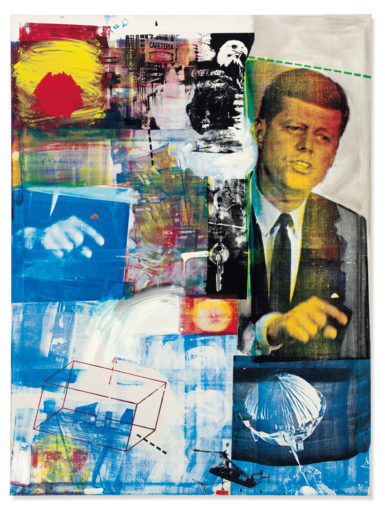 The evening got off to an auspicious start with property from early Pop art collectors Robert B. and Beatrice C. Mayer, led off by James Rosenquist’s Marilyn II (1963), depicting the head of the screen goddess in pie-shaped sections, with one green and one red balloon attached to the oil on canvas. It made $2.66 million against an estimate of $2 million to $3 million. The couple acquired the work in 1964 from the Green Gallery in New York, which run by the late, great talent-hunter Richard Bellamy.

A second Rosenquist, Director (1964), scaled at 90 by 62 inches, includes a painted folding-chair in front of a depiction of a giant, whitewall tire. It sold to a telephone bidder for $3.14 million (est. $2 million–$3 million). It last appeared in public at the traveling Rosenquist retrospective organized by the Guggenheim Museum Bilbao in 2003–04.

The Mayer cavalcade continued with the spectacular 8-foot-high Robert Rauschenberg composition Buffalo II (1964), a virtual graphic novel of 1960s America, from the photographic visage of the recently assassinated President Kennedy (when he was still a U.S. senator) to the purloined image of a Huey helicopter in Vietnam. The oil-and-silkscreen-on-canvas masterpiece roared to a record-shattering $88.8 million (est. $50 million–$70 million). It obliterated the previous mark for Rauschenberg, set by Johanson’s Painting (1961), which sold at Christie’s New York in May 2015 for $18.6 million.

Bidding opened at $38 million and Pace Gallery head Marc Glimcher took an early lead at $55 million before being swept away by a gauntlet of telephone bidders that drove the work to a hammer price (before fees) of $78 million. 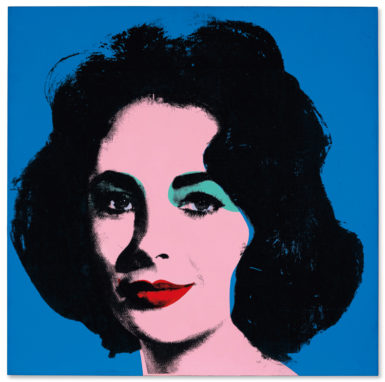 “I was so proud of my bid,” Glimcher said as he exited the salesroom. “I felt like a big man for three minutes but they [the other bidders] were toying with me.”

The Mayers acquired the painting from Leo Castelli in 1965, for $18,000, a year after its appearance at the Venice Biennale, where Rauschenberg received the Golden Lion award, according to the dealer’s widow, Barbara Castelli.

Christie’s guaranteed the painting and judging by its performance, the house might have profited beyond whatever was left of the buyer’s premium (which may vanish into the pocket of the seller).

The couple acquired the Warhol from the Castelli Gallery in 1965 for $1,200, according to Barbara Castelli. 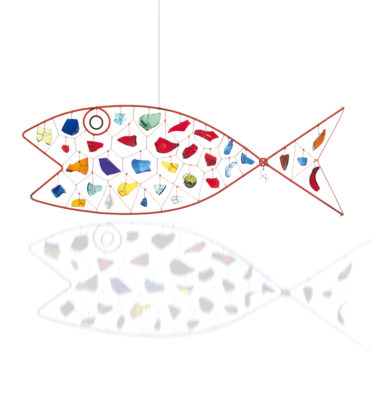 Other Mayer kit included Tom Wesselmann’s Great American Nude #26 (1962), bearing a collaged mix of name brands, like the Coca-Cola six-pack and Beefeaters’ Gin bottle, as well as a large reproduction of a Matisse painting. It sold to art trader Jose Mugrabi for $2.42 million (est. $1.5 million–$2 million).

The Mayer motherload delivered a whopping $157.2 million (122 percent above its low estimate, according to Christie’s), but it was hardly the only evening attraction, as evidenced by Alexander Calder’s sleek Fish (circa 1952), a stunning mobile containing colored glass shards suspended by wire and string, meant to resemble fish scales.

But the uber lot that everyone seemed to be waiting for was Jeff Koons’s stainless steel Rabbit from 1986, a mirror-finish sculpture cast from an edition of three plus one artist’s proof.

Offered from the storied collection of American publishing-magnate S.I. Newhouse, the sculpture (another from the edition) first appeared at the Sonnabend Gallery in a 1986 group show along with works by Ashley Bickerton, Peter Halley, and Meyer Vaisman, all onetime members of the dispersed International With Monument gallery. 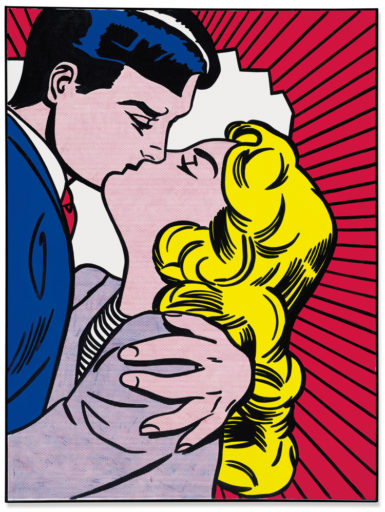 Perfectly cast to mimic a blow-up toy balloon, complete with a protruding nipple at its backside, the sculpture became an instant touchstone of the downtown zeitgeist. “It seemed to me instantly,” the celebrated curator Kirk Varnadoe wrote in Artforum in 2003, “by involuntary reflex—and still does by long reflection—that this bunny is one of those very rare hits at the exact center of the target.”

Newhouse acquired the work privately in 1992 for $1 million from the New York artist Terry Winters, who had his first solo exhibition at Sonnabend in 1984.

The bidding war lasted for 10 minutes and 40 seconds, according to Christie’s and Mnuchin nimbly made the winner offer of $80 million, or $91.1 million with premium.

When asked as he left the salesroom what he made of the record price, Mnuchin, a former equities maven at Goldman Sachs, said, “What can I say? I’m not a predictor and can’t imagine any more than I would [in terms of price] what happens on Wall Street.”

The sculpture shattered the artist’s previous mark, set at Christie’s New York in November 2013 when Balloon Dog (Orange), from 1994–2000, fetched $58.4 million, also, at least at the time, the highest price garnered for any living artist.

Wednesday night, it handily beat David Hockney’s six-month-old record for the highest price of a living artist, nudging past Portrait of an Artist (Pool with Two Figures), from 1972, which made $90.3 million at Christie’s New York last November.

Christie’s built a special room to display the Koons all by its lonesome at its Rockefeller Center headquarters that resembles a baroque art temple or some variant of it in a luxurious shopping center. It was a perfect Instagram setting.

Remarkably, or so it seems in this current market, the Koons was offered “naked,” without any form of guarantee.

Though Warhol’s market has appeared a bit sleepy of late, that even held true for the instantly recognizable, roughly 82-inch high, silver-toned Double Elvis (Ferus Type), 1963, which brought only a single bid to hammer at $48 million—with premium, it bumped up to $53 million (est. $50 million–$70 million). It was also backed by a third-party guarantee. 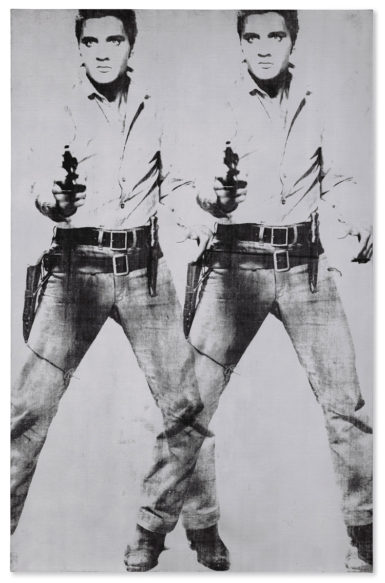 Double Elvis was included in the artist’s first solo show in Los Angeles at Ferus Gallery in October 1963. Warhol sent gallerist Irving Blum a roll of unstretched silkscreened Elvis paintings and simply instructed Blum to cut them up as he saw fit. Blum had a first-row seat tonight to watch his progeny move to a new home. Another version sold last May at Christie’s for $37 million.

Other highlights of the evening ranged from Frank Stella’s early and spectacular masterpiece from his short-lived “Black Paintings” series, Point of Pines (1958), which made a record $28.1 million (est. $25 million–$35 million), to Willem de Kooning’s sumptuous painting Untitled 1 (1975), which made $10.1 million (est. $10 million–$15 million). Color-charged and trophy scaled at about 81 by 70 inches, it debuted to tremendous acclaim at the Xavier Fourcade Gallery in New York in 1979.

Not everything went for multiple millions, but there wasn’t much on offer under seven figures. However, a cartoon-centric KAWS composition, Kurfs (Tangle), 2009, bearing wall power at 72 by 96 inches, eventually went to a telephone for $2.66 million, way beyond its $600,000-to-800,000 estimate.

The evening action resumes with a double-header on Thursday at Phillips (at 5 p.m.) and Sotheby’s at 7 p.m. Don’t be late.