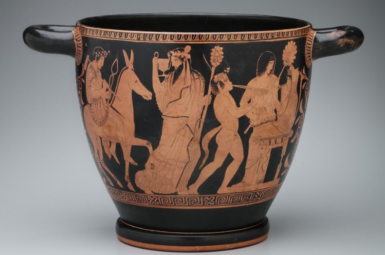 A red-figured skyphos—an ancient Greek earthenware drinking vessel—in the collection of the Toledo Museum of Art in Ohio will be repatriated to Italy, where it will now be under the jurisdiction of the country’s government. The vessel, which dates to 420 B.C.E. and is attributed to the Kleophon Painter of Athens, will remain at TMA for the next four years. Through the museum’s agreement, the TMA may ask to renew the loan or request another object from Italy as part of an ongoing cultural exchange.

The museum purchased the skyphos in 1982 for $90,000. After the work’s provenance was disputed in 2017 by forensic archaeologist Christos Tsirogiannis, the TMA conducted an internal investigation in collaboration with Italian authorities.

Apart from its display in the museum’s permanent-collection galleries, the work figured in the 1996–97 exhibition “The Fire of Hephaistos: Large Classical Bronzes from North American Collections,” which traveled to the Tampa Museum of Art in Florida.

Because of its size, scholars believe that the vessel was used as a mixing bowl at men’s drinking parties in Greece. The skyphos depicts the mythological story of the return of Hephaistos, a metalsmith to the Greek gods, to Olympos, from which he was expelled by his mother, Hera.