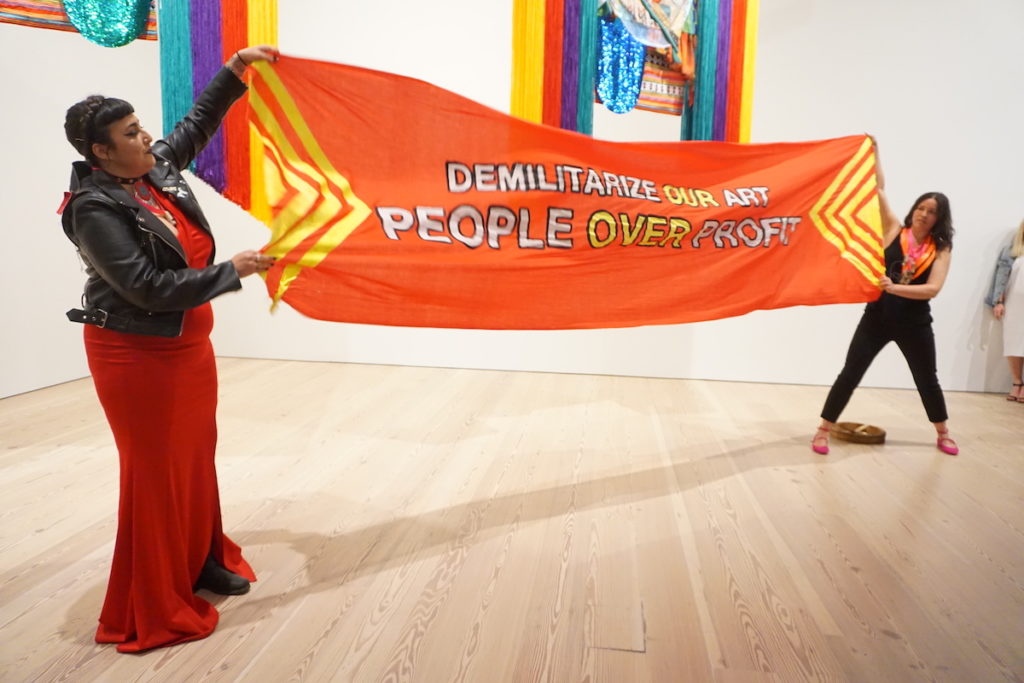 Indigenous Womxn’s Collective protesting at the Whitney Museum in New York on May 15, 2019.

In New York on Wednesday, an opening reception for the Whitney Biennial was briefly interrupted by the activist group Indigenous Womxn’s Collective, which made an appearance to protest Warren B. Kanders, the vice chair of the Whitney Museum’s board, who has faced a barrage of criticism for his work in the production of military supplies.

“Indigenous people and other people of color are violently under attack by Warren Kanders’s manufactured weapons of terrorism,” the group said in a statement that was read to attendees. “You, the Whitney, is harboring a terrorist who profits from violence against brown bodies. You want our art, but not our people.” The group demanded that Kanders be removed from his post.

Kanders is the owner of Safariland, a defense-manufacturing company that produces tear-gas canisters and other products that have been used against asylum-seekers along the U.S.-Mexico border, according to prior reports. Last year, nearly 100 Whitney employees signed an open letter in which they called on Adam Weinberg, the museum’s director, and other higher-ups to consider asking for his resignation. In response, Weinberg encouraged the museum’s employees to start a dialogue about Kanders’s position on the board, and Kanders said he was “not the problem.”

Over the past two months, the activist group Decolonize This Place has staged protests every Friday night against Kanders, at the Whitney. The final action in the nine-week series is set to occur this coming Friday. (The Indigenous Womxn’s Collective action was organized independently of the series, a Decolonize This Place representative said.)

At around 9 p.m. on Wednesday, activists from the Indigenous Womxn’s Collective in the Whitney’s fifth-floor galleries beneath banners by Jeffrey Gibson, who is of Choctaw and Cherokee descent. As a crowd milled around the gallery, an activist from the group began blowing fiercely into a whistle, and another banged a drum. They unfurled a banner that read, “DEMILITARIZE OUR ART / PEOPLE OVER PROFIT.”

After the drum-beating and whistle-blowing, the activists paraded their banner through the crowd, chanting, “Disrupt, deconstruct colonial spaces!”

In a statement read to attendees, the Indigenous Womxn’s Collective said, “We, as indigenous womxn and femme nonbinary people, are making a stand against the continued violent oppression of brown bodies and communities. By not removing Warren Kanders from his position on the museum’s board, the Whitney is in allyship with white supremacy and genocidal settler colonialism.” The activists’ reading of the statement was occasionally interrupted by bursts of applause from the opening’s attendees.

The Whitney Biennial, which opens on Friday to the public, has already become a hotbed of activism. Ahead of the Biennial’s opening, in April, more than half of the participants in the show signed an open letter calling for Kanders’s resignation. The letter had previously been signed by 120 academics and critics. In the show itself, there is work by the research agency Forensic Architecture, which is presenting a film, made in collaboration with Laura Poitras’s Praxis Films organization, that focuses on a new machine-learning algorithm intended to identify uses of tear-gas canisters produced by Safariland in images of protests.

Though no Biennial artists were spotted protesting on Wednesday night, one posted a message of support for the activists on Instagram. Nicholas Galanin, who is of Tlingit-Unangax descent, shared pictures of a baby wearing a onesie featuring the slashed-through word “TEARGAS.”