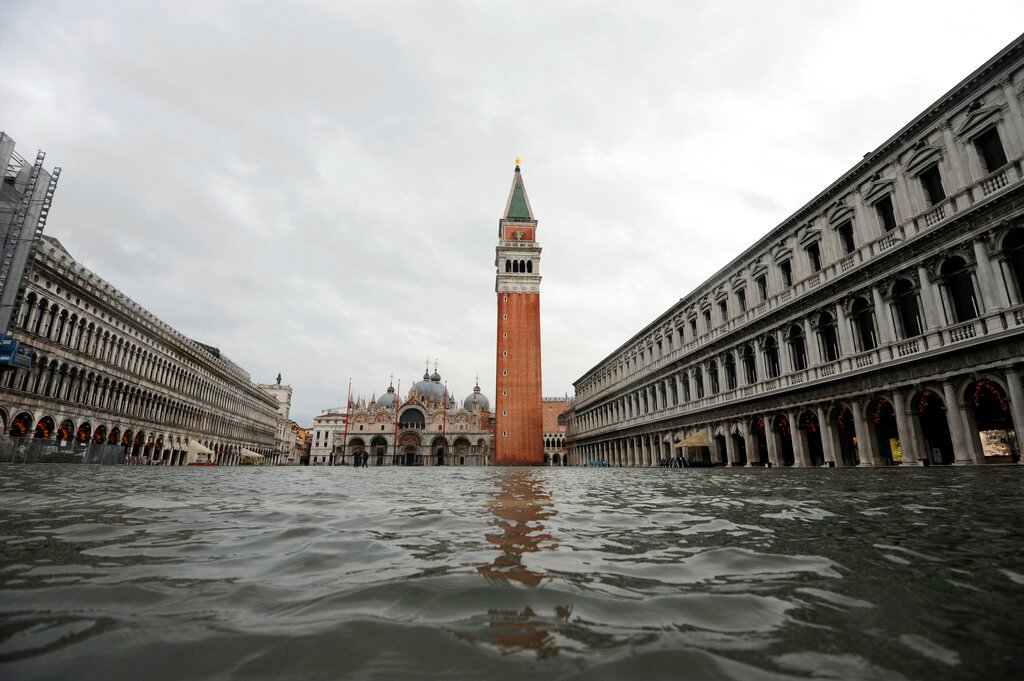 To receive Morning Links in your inbox every weekday, sign up for our Breakfast with ARTnews newsletter.
The Headlines
IT IS DÉJÀ VU ALL OVER AGAIN. The Italian government has barred gargantuan cruise ships from Venice’s historic waterways, declaring them a national monument, the Associated Press reports. The ban takes effect on August 1. If this all sounds familiar, you are not wrong: in April, an Italian decree banned the floating giants, but it was contingent on a new port being built. UNESCO recently said it was  mulling the inclusion of Venice on its list of endangered sites because of the effects of the boats, which spurred action, the New York Times reports. “My heartbeat is so fast I could be having a heart attack,” a happy activist told the paper. Under the new rules, hulking passenger vessels will head to temporary docks at a nearby industrial port. Maybe not as glamorous, but certainly memorable in its own way!

DAMIEN HIRST’S FORTHCOMING NFT PROJECT, “The Currency,” is coming into focus. The basics: a total of 10,000 slices of paper, each covered with painted dots, and each linked with an NFT, will be made available for $2,000 apiece. Eventually, collectors will be forced to choose whether they want the physical artwork or the digital one (the other will be destroyed). Hirst adviser Joe Hage told Bloomberg, “It’s often said that money corrupts art, but this is an attempt of art corrupting money.” The Financial Times has a video interview with Hirst (clocking in at 17 minutes!), and he said that he hopes more people keep the paper work, though the alternative would be “exciting.”
The Digest
An ambitious, multi-venue exhibition in Chicago marks the 40th anniversary of the MacArthur Fellows Program with work by 29 of the artists who have won the so-called “genius grant,” including Kerry James Marshall, Mel Chin, Kara Walker, and Nicole Eisenman. “In a way, the show is a single social practice work,” Don Meyer, a MacArthur senior program officer, said. [The New York Times]
An anti-nuclear artwork by Gabriella Hirst was removed from the Estuary 2021 exhibition in England by one of its commissioners after being criticized by Conservative Party politicians, who allegedly threatened to censor the piece. The artist has objected to the decision. [ArtReview]

Many politicians around South Korea are rather displeased about the culture ministry’s recent announcement that it will build a museum for work from the collection of the late Samsung titan Lee Kun-hee in Seoul. They argue that too much of the nation’s cultural infrastructure is located in the capital city. Officials in the southern city of Busan, for instance, said in a statement that it was a “one-sided decision that ignored provincial regions and did not go through a fair decision process in the least.” [Yonhap]
The Museum of Contemporary Art Chicago has a new board chair: the philanthropist Cari B. Sacks, a longtime trustee. The MCA is currently looking to fill top staff positions. In January, chief curator Michael Darling and senior curator Naomi Beckwith announced they were leaving for new jobs. [Chicago Tribute]
In a not-unimpressive marketing move, the adult-video site Pornhub has created guides to nudes on view at prominent museums, including the Louvre and the Prado. The guides include decidedly not-safe-for-work material inspired by the vaunted artworks. [The Art Newspaper]
In a new interview, National Gallery of Art director Kaywin Feldman discusses the recent rebranding of her Washington, D.C., institution, and how it felt to return to the building after the January 6 attack on the U.S. Capitol. [Washingtonian]
The Kicker
IT IS THE END OF AN ERA. No, do not worry, this is not news of another important gallery (or important grocery store) closing. Instead, this past weekend, the Kmart at Astor Place in Manhattan locked its doors for the last time. It turns out that the store had supporters in the art industry. When it opened in 1996, the future art critic Johanna Fateman was interviewed by the Times while paying it a visit, as one eagle-eyed Twitter user pointed out, and now Pulitzer Prize-winning critic Jerry Saltz has penned a panegyric to it. Kmart, Saltz writes, “was my safe space, my battlefield of ideas, my revenge, the internal fissuring of my self-martyrdom, my style methadone that kept me off the inaccessible scary hard drug of high fashion.”
Thank you for reading. We’ll see you tomorrow.

Robert A. Ellison Jr., Champion of Modern Ceramics and Pottery of All Kinds, Has Died
Christian Boltanski, Artist Who Tenderly Pondered Mortality and Trauma, Has Died at 76
To Top
error: Content is protected !!