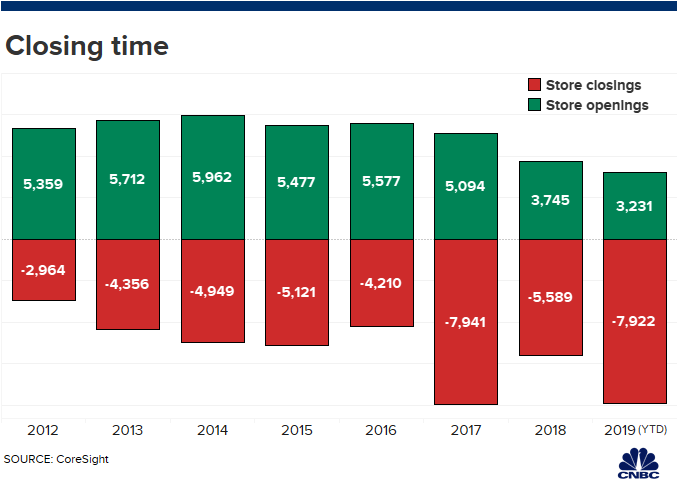 Macy’s CEO Jeff Gennette calls it noise, and says it’s making it difficult to gauge the true strength of the U.S. economy and the American consumer.

“There is a lot of noise out there, tariffs, currency fluctuations, lower international tourism. But consumer spending, that looks healthy,” he told CNBC in an interview. “There’s low unemployment, low interest rates.”

Still, Gennette acknowledged: “It is slower than last year — but any other year, the level of growth of consumer spending would be good for the economy.”

Gennette’s encouraging comments are all the more startling when one considers what he’s been up against.
Macy’s stock is down more than 46% this year. Its market cap has been cut by more than half since a year ago to $4.9 billion. Some of those stock losses came last week after Macy’s turned in disappointing earnings and cut its forecast for the year.

Macy’s and other departments stores have felt the most pain as consumer shopping habits changed. Shoppers are shifting away from traditional malls, buying more clothes and goods online or renting apparel from subscription services. On top of that, the trade war between the U.S. and China will force retailers to raise prices, potentially hurting sales or be less profitable.

Amid the stores closures and retail bankruptcies announced this year, it can be tough to accept that the U.S. consumer is doing just fine. Take July retail sales, which grew more than expected from June and posted the strongest five-month growth streak since 2005-2006. Economists, retail watchers and even retail executives mostly agree that the U.S. consumer in general remains strong, and may be what’s holding up the economy, since 70% of economic activity is tied to consumer spending.

But that doesn’t mean it’s easy for retailers or that these conditions will remain this way.

On the day Macy’s posted its results, the two-year U.S. Treasury bond briefly paid a higher yield than the 10-year U.S. Treasury bond, causing what’s referred to as an inverted yield curve, an event that often precedes recessions. What followed was the Dow Jones Industrial Average logging its worst day of the year when it shed 800 points.

“In the most recent 20 years, there has been only one recession, the one we insist on calling ‘The Great Recession,'” Jan Rogers Kniffen, CEO of J Rogers Kniffen World Wide and former senior vice president and treasurer at The May Department Stores. “Since then we have been in the longest consumer-led expansion in U.S. history.”

Walmart, the world’s largest retailer, has been one beneficiary of that expansion. It reported stronger-than-expected second-quarter earnings, revenue and same-store sales and increased its annual forecast, even in the face of more tariffs looming ahead.

But on the flip side, other retailers are feeling the pain. The CEO of Tapestry, the owner of Coach and Kate Spade last week called the North American environment “challenging.” And the company, which had hoped to grow its portfolio of luxury brands through acquisitions, said it would instead turn inward and focus its investments on the brands it currently owns.

In short, consumers have more choices than ever, and with their financial stability can afford to be discerning about where and what, they buy.

Some have attributed that surprisingly strong July retail sales report from the Department of Commerce to another record Amazon Prime Day.

But the growth isn’t coming from stores. Online shopping is winning three-quarters of U.S. retail growth, according to the Census Bureau, and one company is pulling in the vast majority of it. EMarketer estimates just under half of all online shopping in this country is done on Amazon.

Put together, and the U.S. simply needs less retail space.

More than a quarter of the country’s malls have closed since the peak of retail expansion.

A Credit Suisse report predicted 25% of the nation’s malls would close by 2022. Real estate research firm Green Street Advisors says occupancy averages around 87% for the country’s malls, though the top-rated malls are closer to 94% to 95% occupied.

New malls are still being built, but with more restaurant and entertainment tenants than mall predecessors. The American Dream complex in East Rutherford, New Jersey, has been in development for 16 years and changed owners three times. When it opens in late October, it is expected to be 55% entertainment and 45% retail.

Brookfield Properties will open the SoNo Collection mall in Norwalk, Connecticut, in October as well. It, too, will have other uses beyond retail, including an indoor-outdoor sculpture garden and other public spaces. Manhattan’s Hudson Yards opened in March, featuring high-end eateries and retail brands including New York City’s first-ever Neiman Marcus.

Since the beginning of 2017, major retailers have shuttered or announced plans to close more than 21,452 U.S. stores, according to Coresight Research. When accounting for the offsetting number of store openings, nearly 9,382 store closures have been announced since 2017.

Stores are closing for a variety of reason. Some are healthy retailers reevaluating store fleets and closing unproductive locations. In other cases, stores close as retailers file for bankruptcy, reorganize or liquidate. Many retailers that have filed for bankruptcy in recent years were unable to pay off overwhelming debt loads from previous private equity leveraged buyouts. Because of the cash needed to repay loans, these retailers had less capital available to invest in stores and digital operations to keep up with changing consumer preferences.

Invest, if you can afford it

Those investments can make all the difference as Walmart’s recent results show. It has spent billions bulking up its e-commerce business to better to compete with Amazon. Walmart’s e-commerce sales during the second quarter rose 37%, and Walmart expects online sales will be up 35% for the year.

AlixPartners counts 160 nonfood retailers that have filed for bankruptcy since 2006. Sixty-five of them ultimately liquidated, including Toys R Us and Linens ‘n Things.

So far this year, the retail consultancy counts 12 nonfood retail bankruptcies, with four of those, Charlotte Russe, Charming Charlie, Payless ShoeSource and Gymboree, liquidated. Several others have outcomes still to be determined, including luxury department store Barneys New York.

Department stores are trying to be innovative but the companies are challenged by the burden of operating hundreds of stores as sales decline. Last year, 3.5% of retail sales went to department stores, down from 5.9% in 2010, according to MasterCard SpendingPulse data that reflects overall retail spending across all payment types.

But when shoppers are buying from department stores, more of it is online. MasterCard SpendingPulse said 25% of online spending went to department stores in 2018, up from 10% in 2010. Macy’s just logged its 40th straight quarter of double-digit online sales growth. At the end of the first quarter, 31% of Nordstrom’s sales were online.

This means fewer stores, with their expensive overhead, are needed.

Green Street Advisors counts around 500 department store closings in 2018 alone. Last year, Bon-Ton filed for bankruptcy and eventually liquidated. Sears also filed for bankruptcy in the fall of 2018 and closed hundreds more locations than had already been shuttered in recent years as part of a deal former CEO Eddie Lampert made to buy the company. In the last two years, Macy’s has closed around 40 stores and J.C. Penney has closed nearly 150 locations, according to FactSet counts.

“The department store has been in a pretty impossible place since about 1992 when the ‘female invasion of the workforce’ ended,” Kniffen said. “We had built out the mall base in the U.S. by then. The discount store had been taking over share for more than 20 years already. Off mall, with things like Kohl’s, and [TJX Cos.’] T.J. Maxx, Marshalls was rising, and we were about to see the first sale online during that decade. “

In Kniffen’s assessment, both Macy’s Gennette and Penney’s CEO Jill Soltau are employing good strategies, but the former department store executive added “the jury is out whether it will be enough.”