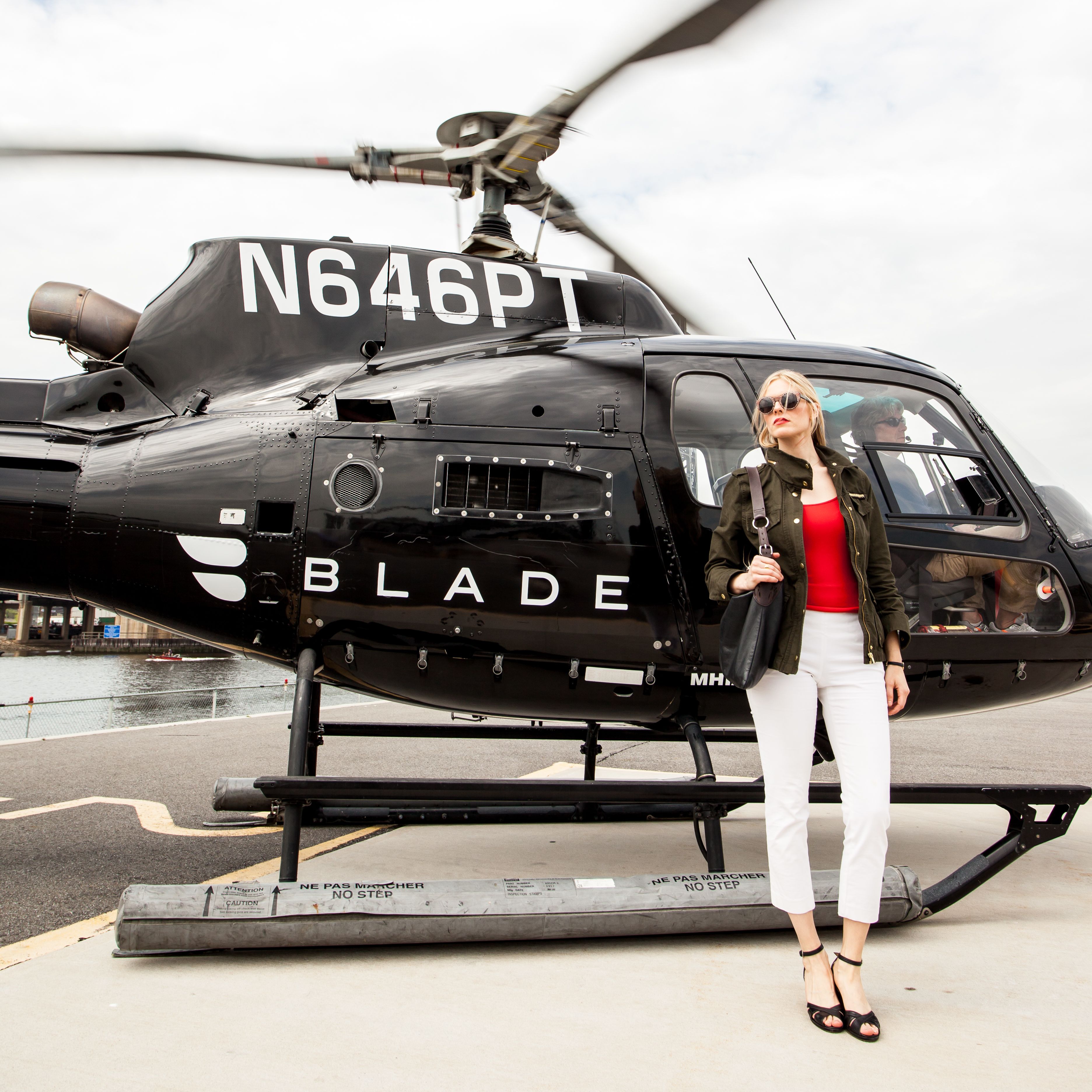 Few things are more annoying than suffering through the bumper-to-bumper traffic along the 10 to 20 miles that separate Manhattan from its three metro area airports.

That’s a lot of people clogging up roadways to make their flights.

We tested the best way to cut that commute time, taking to the roads, air and rail to find out the fastest and most cost-efficient way to get to and from your terminal.

Two companies are making the dream of zooming over horrible traffic at 120 knots an hour a reality for New Yorkers. Blade Urban Mobility started offering on-demand helicopter service to New York-area airports this spring, followed by Uber Copter on July 9. Both companies allow users to book a chopper via an app on their smartphone. It’s almost as easy as ordering a car.

The companies work like an on-demand car-pooling service for helicopters. Users reserve a seat over a window of time and then share the ride with other passengers.

The competition and shared costs have turned a luxury once reserved for the super wealthy into one that’s still pricey, but more affordable than ever.

Blade’s airport helicopter service is $195 per seat anytime to any airport. The Bell 407GXP choppers can carry up to six passengers and operate from 7 a.m. to 7 p.m. Monday thru Friday and Sundays from 3 p.m. to 7 p.m. The company flies back and forth from three helipads in Manhattan and typically offers on-demand flights several times an hour:

Passengers can take one commercial carry-on that weighs up to 25 pounds per passenger and one personal item on board. Checked luggage is extra. Tote Taxi will shuttle two extra pieces of checked luggage weighing up to 200 pounds combined to JFK or LaGuardia for an additional $85 or Newark for $120.

Blade users have to get themselves to the helipad, but a Blade SUV picks up clients at the JFK heliport and drops them at their terminal. Users can reserve seats on the app in real time and as far out as December.

For return trips, the company’s website says it will monitor a user’s commercial flight’s arrival time so he or she can be transported to the next available Blade helicopter. And the company is also offering yearly memberships called Airport Pass with an up-front fee of $295 or $795 that reduce the cost of a seat to $145 and $95 respectively.

Uber’s on-demand helicopter service, Uber Copter, doesn’t have fixed prices like Blade. It’s determined based on demand and is a bit pricier. The average cost typically ranges between $200 to $225, but could be more, depending on demand, Uber spokesman Matt Wing said.

The deal includes an UberX, the app’s budget car option, that picks users up in select areas of New York, currently parts of lower Manhattan and the West Side. It drops them off at the Wall Street helipad to catch a chopper to JFK where another Uber vehicle transfers clients to their terminal.

According to the company’s website, the service only operates between Wall Street and JFK during afternoon rush hours from Monday to Friday. It’s only available to Uber’s platinum and diamond reward members, lower status users won’t even see the chopper option on their apps, but Wing said Uber plans to expand to a wider user base.

Uber’s service can be ordered in real time or up to five days in advance. Passengers can bring one carry-on weighing 40 pounds or less, plus a personal bag. The Uber service uses dual-engine aircraft that carry up to five passengers, with flights operated by HeliFlite a third-party charter company.

On Blade’s website, a promotional video suggests the airborne commute from Manhattan to JFK is 5 minutes, but that’s just time in the air. It doesn’t include time getting to the helipad or from the airport helipad to your terminal.

CNBC sent four employees to test each service in an airport run during rush hour from Sullivan Street between Spring and Prince Streets in lower Manhattan to Kennedy Airport, the Big Apple’s busiest airport, which served 61.6 million passengers last year.

The four modes of transportation measured were Uber Copter, Blade chopper, Lyft car service and mass transit. Each employee started their rush-hour commute from Manhattan’s Soho neighborhood at precisely 3:50 p.m. on a Wednesday in July. The finish line was JFK’s Terminal 8, an international terminal for American Airlines, British Airways and others that served 9 million passengers alone last year.

Here are the results:

Tracking the Uber Copter ride on the app

CNBC producer Jessi Joseph scheduled an Uber Copter ride the day before, selecting a time window of 4 p.m. to 4:10 p.m. Her budget UberX was scheduled to pick her up at 3:52 p.m. and estimated her arrival at JFK Terminal 8 at between 4:47 p.m. and 4:52 p.m.

On the day of the commute her driver arrived two minutes early. She departed from lower Manhattan at 3:50 p.m. and drove for 17 minutes to the Wall Street heliport. After checking in, she waited 18 minutes to board her chopper. Her helicopter took off at 4:25 p.m. Her total time in the air was 7 minutes and 7 seconds.

At JFK, she waited 3 minutes for another Uber to pick her up and take her to Terminal 8. Her arrival time was 4:42 p.m., earlier than the the app’s estimate, bringing her total travel time to 52 minutes. Total cost for the all-inclusive Uber Copter deal: $228.57 or about $4.40 per minute.

I reserved a Blade helicopter flight the day before with a time window of 4:11 p.m. to 4:50 p.m. The app processed my request and delivered a flight time of 4:25 p.m.

I got into a Yellow Cab in Soho at 3:50 p.m., which took 17 minutes and cost $17.15, including tip. Check-in at the Blade lounge took seconds, leaving no time for a complimentary cocktail since my 4:25 p.m. departure was moved up to 4:10 p.m. because all passengers for the flight arrived at the helipad early.

The flight, which is promoted on the company’s website as “5 minutes” was 8 minutes and 12 seconds from liftoff to landing. Blade’s CEO Rob Wiesenthal tells CNBC flight times can be impacted by wind, weather and even temperature. A Blade SUV was ready and waiting at the JFK helipad, and within minutes I was delivered to Terminal 8.

Comparing the time and cost of four real-world commutes from Lower Manhattan to JFK Airport.

CNBC intern Phillip Minton walked about a minute to the Spring Street subway station. He took seven-minute ride on the uptown E train to Penn Station for $2.75 where he connected to a Long Island Rail Road train to Jamaica, which cost $7.75 and took about 19 minutes. The cost rises to $10.75 during peak hours.

The AirTrain to Kennedy’s Terminal 8 cost $5 and took 16 minutes. Total travel time from lower Manhattan to Terminal 8 via mass transit was 66 minutes, the subway fare plus the tickets for the LIRR and Air Train cost a total of $15.50 or about 24 cents per minute.

CNBC producer Erica Wright selected a Lux Black Lyft at 3:50 p.m. The company’s luxury black car took nearly six minutes to arrive at the same location in Soho. Waze originally estimated her drive would take an hour and 24 minutes, but it took just 63 minutes. Her total wait time, plus travel time from lower Manhattan to Terminal 8, was 72 minutes.

While no one can argue with the fact that choppers cruising through the air at 120 knots in an eight-minute flight to JFK are definitely the fastest option available, the takeaway from this unscientific test is that helicopter commutes still require drive time to and from the heliports, and those parts of the commute can and do dramatically increase commute times.

In the two flights we took for this race, those 7- to 8-minute rides became small parts of longer commutes that clocked in at 42 and 52 minutes.

In the end, the most expensive of the four options, Uber Copter, was only 14 minutes faster than mass transit but cost $213.07 more.

And keep in mind speedy helicopter flights can can come to a screeching halt when a chopper must be grounded due to inclement weather, extreme temperatures or high winds.

But for those who can afford it, hopping on a helicopter was a lot more fun than schlepping across a congested platform to fight for a seat on a crowded train.

It takes more than a strong consumer to be a successful retailer
Estee Lauder, Palo Alto Networks, Nvidia & more
To Top
error: Content is protected !!