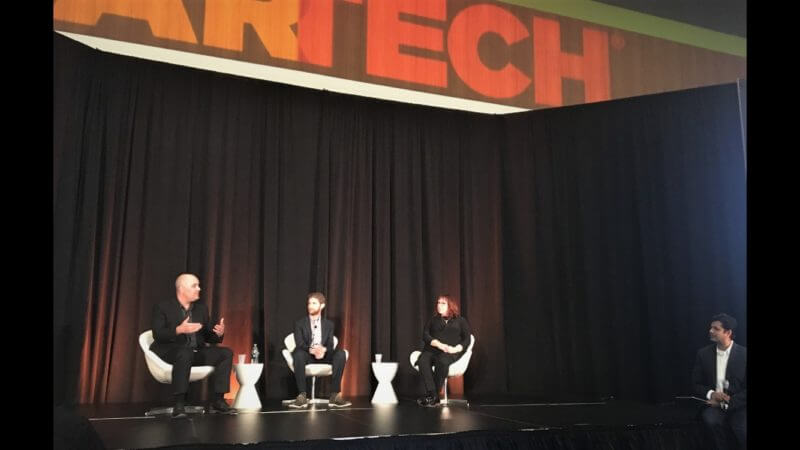 SAN JOSE, CA — “If you are in marketing operations right now, you know that rationalizing a single stack is hard. Bringing together two stacks or more is really complex,” said CabinetM COO Sheryl Schultz at this year’s MarTech Conference.

Schultz moderated the “When Stacks Collide” session featuring Poly (formerly Plantronics) senior manager of marketing technology Zack Alves and LogMeIn director of marketing operations Justin Sharaf. Both Alves and Sharaf have led their teams through major company acquisitions, having to manage the process of integrating multiple martech stacks into one stack that met everyone’s needs.

Three rules for blending stacks. LogMeIn has acquired more than ten companies in the past seven years, at one time growing from 1,200 to 3,500 employees in one afternoon. To manage the chaos of bringing two separate martech stacks together at such times, Sharaf has developed three specific rules.

He said his first rule is to find a “best-fit” technology. It’s not about selecting the most popular platforms, but choosing a solution that fits the company’s needs. Second, he makes sure the technologies he chooses fit within the existing technology ecosystem, and are scalable. Last, he avoids redundancy.

“We made sure when there was redundancy, we could consolidate,” said Sharaf about the LogMeIn’s martech stack when the company acquired GetGo in 2017.

Before deciding on a martech solution, Sharaf makes sure the technology passes security and compliance standards. He has also created a system to document each solution’s capabilities that is accessible to everyone in the company and has set up a leadership counsel so that stakeholders have the opportunity to offer their thoughts on what is important. Sharaf said getting leadership sign-off on any new technology is a priority.

“Once it was clear there was no redundancy and the proper sign-offs were given, only then would we start to evaluate the technology,” said Sharaf.

“It felt like Christmas morning at first,” said Alves of all the new solutions. But then, he said, the reality set in. “You have a bunch of different toys from different play sets.”

Not only did the martech stack grow exponentially, the business teams doubled in size overnight with roles and responsibilities shifting and reorgs happening. (Just last month, Plantronics rebranded as Poly.) During this time, Alves said one of the most crucial factors to ensure his team’s success was the ability to build alliances within the new company structure.

“Find those new go-to people, and go to them,” said Alves, “You’re going to need those relationships when you’re selling ideas later on.”

Alves said it was important that his martech organization presented itself as a team of marketers who wanted to advance the company’s vision, which meant finding opportunity in the unknown when a lot of people were saying no to new ideas. To do so, his group gathered as much data on the company’s technology as possible.

More about the MarTech Conference

“We wanted to make sure we were very organized and had a version of the truth we could react to,” said Alves, who also admitted it’s extremely important in the early stages of a merger to pick your battles. “I can’t emphasize this enough. You don’t need to die on every hill.”

Alves believes anyone trying to put their fingerprints on every project runs the risk of failing to succeed in the core mission.

Tactical actions to take during the first year. Sharaf and Alves agreed that if you can’t find a champion for any given marketing technology tool, then it’s gone. Clearing redundancy was also an important task for both Sharaf and Alves during the early stages of combining multiple martech stacks.

Alves was able to reduce three different marketing automation platforms to one that aligned with his company’s CRM system during the initial phases of blending Plantronics and Polycom’s martech stacks.

Reviewing all of your martech contracts is another important step to take early on so you can identify which contracts auto-renew and avoid being locked into an agreement with a platform you don’t plan on using. There are also new opportunities to renegotiate contracts as your company’s martech needs grow.

“If you haven’t implemented a system where every new martech contract comes across your desk, do it tomorrow,” advises Sharaf.

Share your knowledge. To evaluate the need for each martech tool in the stack, Sharaf had his team interview LogMeIn’s marketing staff to find out who was using what tools and how they were using them. He said the research showed different people were using tools in different ways.

Sharaf then built a profile for every piece of tech in the martech stack. “It’s so powerful because it opens up that knowledge for everybody.” Before new products can be bought, or even renewed, Sharaf requires a written business case for the tool by the person requesting it.

When it comes to blending martech stacks, and the ongoing management of marketing technology, Schultz pointed out how it’s a never-ending process. “Every time you think you have everything in your stack identified, it changes.”

Instagram confirms it is testing increased ad loads in Stories