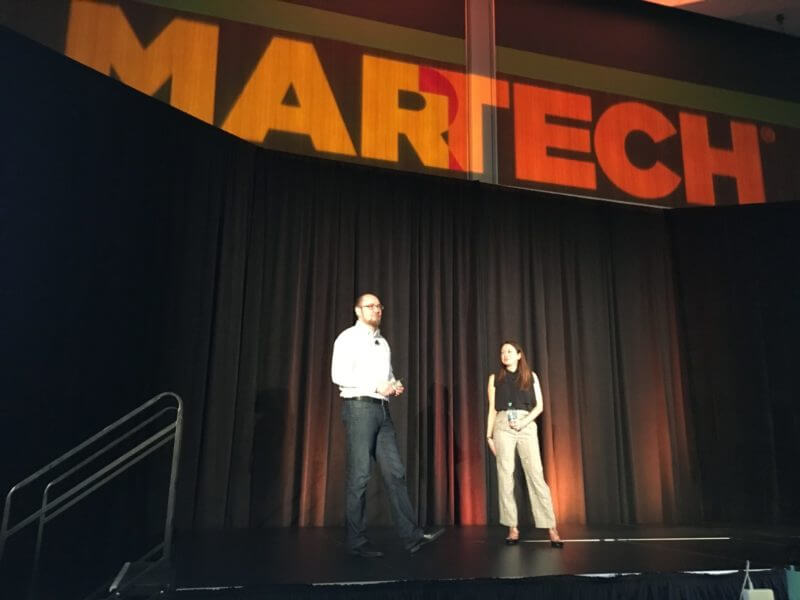 SAN JOSE, CA — The New York Times print advertising business experienced a sudden shock in 2008 when the paper lost most of its ad revenue nearly overnight.

The need for a martech product manager. To meet the ambitious subscription goals, Pamela Della Motta, director of product marketing technology at The New York Times, said there was a need to integrate the company’s disparate data. The paper’s technology solutions were too siloed and nothing was working.

“If you looked closer, this was an engineering problem,” said Della Motta during a talk with Kristensen at MarTech Conference Thursday. She noted that the company’s engineering team was already booked with priorities, and there was a disconnect between the engineers and the marketers who didn’t speak the same business language. This is where the role of the martech product manager came in.

The product manager understands the business or marketing problem, and then can go to the engineering team and break it down into use cases that can be solved.

“My team, the martech product team, sits between strategy and customer experience delivery,” said Della Motta. Her team aims to find the balance between centralizing and decentralizing technology. One example she used was the decision to limit access to the company’s CDP data to a small group of marketers within the organization to avoid multiple audiences being created. Now, creation, governance and management of audiences is owned by the martech product team.

Immediate benefits. Della Motta said marketers had been creating the wrong audiences and sending the wrong messages and often blamed the tools — but, the errors were usually a result of people not properly trained on the marketing technology solutions. The director of product marketing technology has people in place now to train marketers, demonstrating things like how the CDP works.

She said the most important byproduct of the digital evolution has been collaboration, bringing together teams across the business lines.

“We’re forced to think more broadly and embrace the fact that whatever change we do has ripple effects,” said Della Motta.

The un-bundling of agency services. Another benefit to having a martech product team is it offered an opportunity to stop relying on agencies and the bundled services they provide.

In the past, brands were often forced to depend on agencies that bundled their services working with vendors, measuring campaigns and more on the brand’s behalf.

“It’s easy to fall into this very expensive hole, which happened to us,” said Della Motta. By moving into more digital landscapes, the need for bundled services has decreased and has been replaced by the rise of stand alone tools that help brands connect with customers — with solutions that can be easily implemented in-house.

A day in the life. When asked what a regular day looks like for a martech product manager, Della Motta said there is a lot of time devoted to weighing options, and knowing that you’re likely to disappoint someone. It is also important to have influence because the team itself doesn’t have the ultimate authority to tell an engineer or the marketing team what to do.

“We have to influnce them and let them buy-in to what we want to do.”

Della Motta said, as a product team, they have had to throw away the product management ideology that there is a start and an end to whatever you’re building, and that you learn from that process. Instead, her team has to reiterate and learn as it goes, and find the use cases as products evolve.

Who’s paying for it. Another thing the martech product team had to figure out was how to involve finance and accounting. The finance team wanted to know: what did they want to build, what was it going to deliver and how much would it cost.

“The problem is, we don’t always know, starting out, what we need to build,” said Kristensen. What they’ve tried to do, according to the VP of engineering, is retain as many options as they can in terms of how they approach product building.

Bringing it all together. “One of the big things for us is cadence,” said Kristensen, “Making sure certain things happen at a specific time, and that the cadence of such tasks remains in place.”

He said having a predictable cadence works on all levels and helps the team answer the question, “Did the KPIs we set out to achieve happen?”

The time has come to optimize for IRLs rather than URLs

How next-generation algorithms could impact your marketing strategy