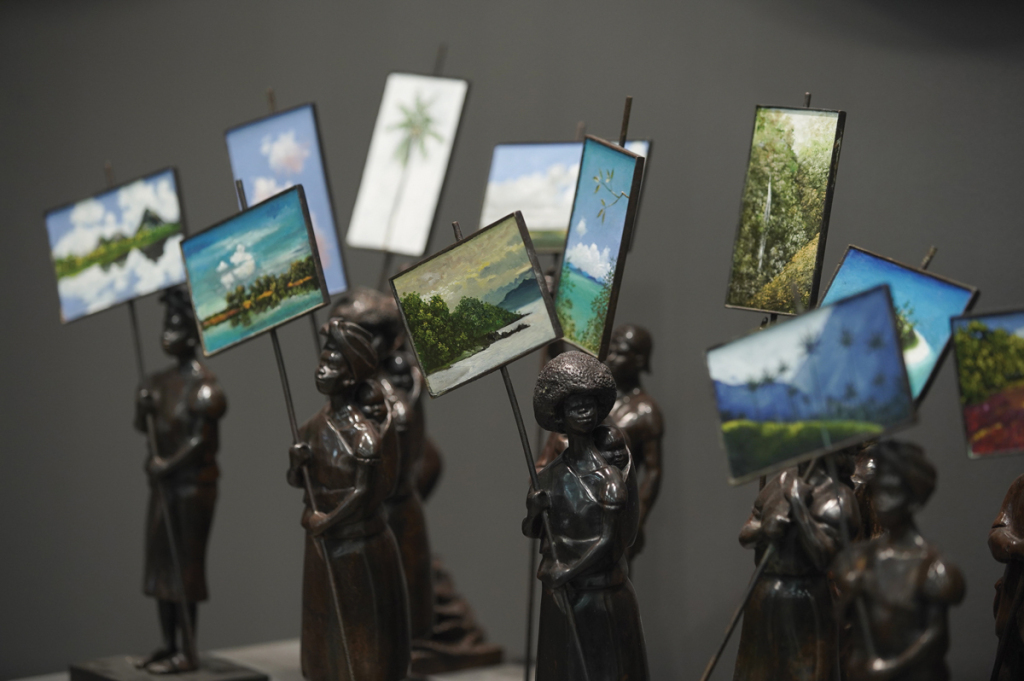 For a survey of what lies ahead as the art world looks forward to the future, ARTnews devoted part of the June-July 2021 issue of the magazine to 10 cities to watch: Philadelphia, Atlanta, Vancouver, Guadalajara, Bogotá, Oslo, Tallinn, Casablanca, Abu Dhabi, and Taipei. Stay tuned as each city joins related reports from Seoul and Paris online in the weeks to come.
A city whose people are known for quickly and continually adapting to changing circumstances, Bogotá has long been home to major artists, including Beatriz González and Doris Salcedo, who have poignantly reflected on the many hardships and atrocities that have marked Colombia’s history. In the past, the artist community operated mainly by way of underground platforms, from artist-run spaces to bars to parties and other events that bring the city’s scene together. But in recent years, that same community has, with a certain sense of urgency, been creating institutions that will support the work of artists today and in the future.

Emerging Gallery Neighborhood: San Felipe
Bogotá’s art scene is fairly widespread across town, but San Felipe has emerged over the past five or so years as a dedicated gallery district energized by a sense of flux that invites improvisation and experimentation, and grounded by a mix of established operations—like SKETCH, 12:00 (Doce Cero Cero), and Galería SGR—and dynamic spaces that turn over quickly. Since the start of the pandemic, several neighborhood galleries have banded together with others across both city and country to form the Asociación de Galerías de Arte de Colombia to advocate for their needs, including lowering taxes on art imports, exports, and sales.
One of the pioneering galleries in San Felipe is Instituto de Visión, which was born in the spirit of resilience that is crucial to Colombia. “We’re a city and a country so used to crisis that we adapt very fast,” said Beatriz López, who cofounded the gallery with Karen Abreu and Omayra Alvarado. They took the gallery name from a photographic series by Nicolás Consuegra that documents the fading names of now-defunct businesses—with one image showing the ghostly words “Instituto de Visión” on an old stone facade.
When they opened in 2014, López and her partners sited the gallery in a house—as opposed to a traditional white cube—in a working-class neighborhood with woodworking and auto shops nearby. Other galleries followed, eventually numbering into the dozens. But the collective idea has been to maintain an organic feel. “We’ve been working hard not to overwhelm the community and to work with the community,” López said. Accordingly, one strategy has been to replace nighttime openings offering alcohol with Saturday morning events featuring a large tropical fruit cart where anyone from the neighborhood can indulge.

Instituto de Visión is also devoted to diversity. “Part of our work is to embrace voices—women, Indigenous, queer—that have been turned down by the official history of art,” López said. “We try to create relations and connections beyond the rhythm that the market is creating. It was important to open spaces that didn’t try to join forces of assumed elegance or assumed aesthetics of good and bad taste.”
The gallery’s “Visionaries” program focuses on Latin American artists who have been overlooked, such as Miguel Ángel Cárdenas—a pioneering performance and video artist who was born and educated in Colombia but left in the 1960s over difficulties in creating work marked by a queer sensibility and an interest in sexuality in an extremely Catholic country. After Instituto de Visión exhibited him in 2015, institutions including Tate and MoMA began acquiring his work.

Established Local Art Fair: ArtBo
Unlike art fairs run as private businesses that look to assemble galleries from around the world, ArtBo is run by Bogotá’s nonprofit Chamber of Commerce as a way to help promote commercial activity in the city. “From its inception, ArtBo was constructed [to serve and stimulate] the whole community,” said María Paz Gaviria, ArtBo director.
Since its inauguration in 2004, ArtBo has helped professionalize the city’s art scene, and grown a local collector base practically from scratch, in Latin America and internationally. Typical editions of the midsize fair attract some 70 exhibitors from more than 15 countries in Latin America and beyond, focusing in particular on emerging and mid-tier galleries. An Arte Camera section in recent editions has been devoted to Colombian artists without commercial representation, who apply via an open-call system. (After the past three editions, the government agency Idartes collaborated with ArtBo to award one of the artists featured in Arte Camera a residency space to develop a new project.)
In concert with ArtBo, a citywide initiative called ArtBo Fin de Semana (Spanish for “weekend”) offers a range of events, exhibitions, and activities that ties the fair to area galleries, museums, and other institutions. Gaviria said such partnerships “help unify the city,” adding that ArtBo’s ultimate aim is to work with curators to mount exhibitions of emerging artists.
Beatriz Esguerra, who founded her namesake gallery in 2000, said that ArtBo “brought Colombian art to the world to view—it’s done its job.” Beatriz López of Instituto de Visión praised the way the fair “helps galleries construct a portfolio and build a community of collectors.” Catalina Casas, who opened her gallery, Casas Riegner, in Miami in 2001 and relocated it to Bogotá in 2005, said, “it’s been a great support to the local art scene, to be looked at from an international standpoint.”

Institutional Support
Bogotá is home to nine art schools that churn out graduates in droves: “Almost 300 people becoming professional artists every six months—that’s a very active field,” said Catalina Rodriguez, director of Instituto Distrital de las Artes (Idartes), a government agency within Bogotá’s mayoral office that helps support young artists as they find their way toward building a career. Rodriguez, who has headed Idartes through three administrations, developed a set of grant programs with a goal toward “creating conditions so artists and organizations can develop” in areas as wide-ranging as mounting exhibitions and funding research. Idartes also manages an exhibition space called Galería Santa Fe in the historic downtown La Candelaria neighborhood, with a program that provides funding for artist projects and an annual Luis Caballero Award that gives a mid-career artist around $12,000 and an exhibition.
Another important supporter of the arts is the Banco de la República, Colombia’s central bank, which has been a major collector and exhibition venue of Colombian art for the past 50 years. The bank’s involvement with the arts dates back to 1957, when it hosted a modern art salon, and led to a collection of more than 6,000 works. The bank’s museums mount shows that delve into the collection’s holdings, including recent acquisitions, and organize biennial retrospectives of major Colombian artists that exhibit nationally and travel to venues like MALBA in Buenos Aires and Jeu de Paume in Paris.
Maria Wills Londoño, director of arts museums of Banco de la República, said, “Banco de la República, being a public institution, has considered culture a central pillar of philanthropy and of the conservation of cultural heritage. Banco believes in collecting art as a way of creating, communicating, and preserving history for future generations, as well as in creating and representing the diversity of our amazing country.”
A version of this article appears in the June/July 2021 issue of ARTnews, under the title “The Artisanal Incubator: Bogotá.”