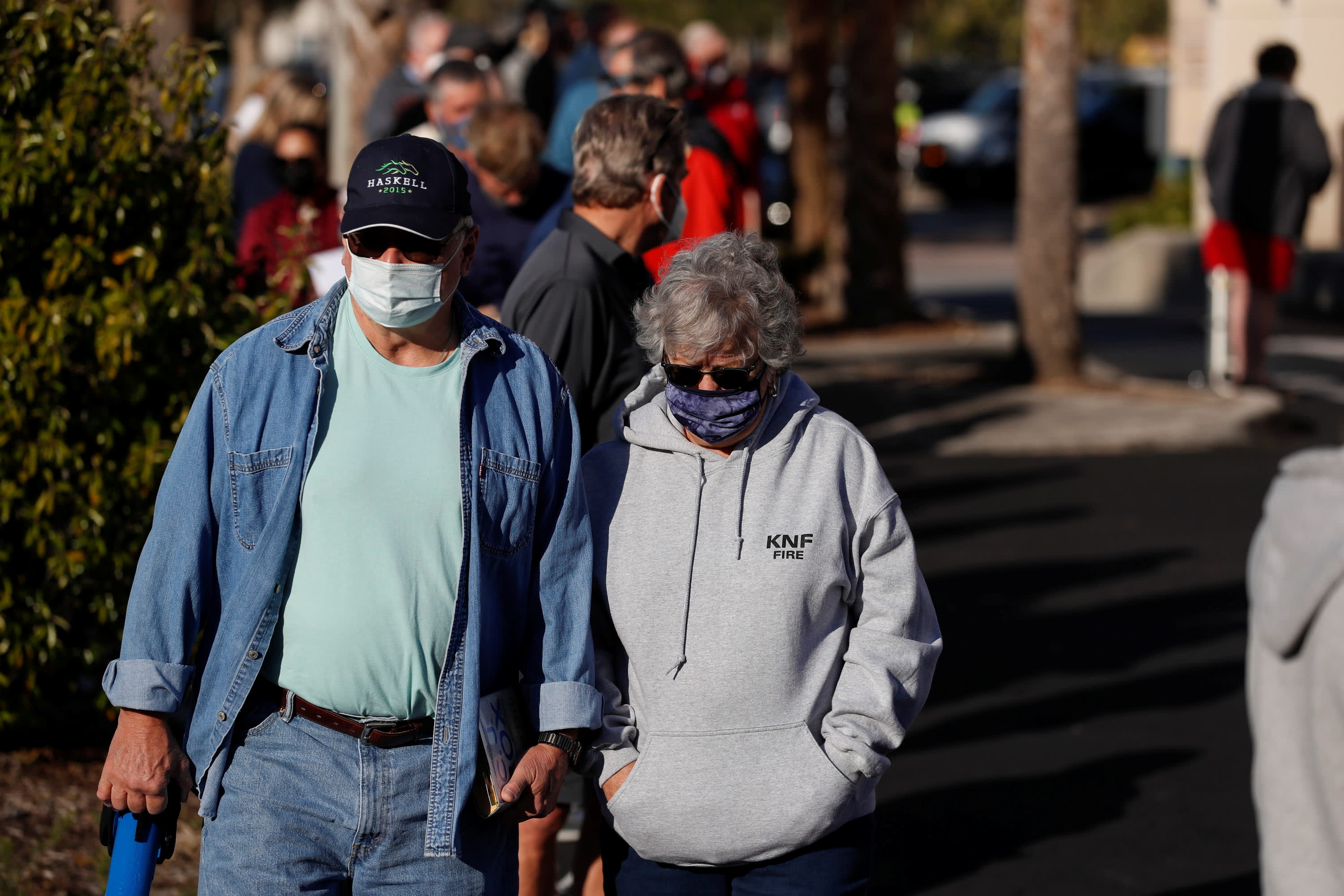 Seniors, who are 65 and over, wait in line at the Department of Health Sarasota COVID-19 vaccination clinic in Sarasota, Florida, U.S. January 4, 2021.Octavio Jones | ReutersThe American Hospital Association pressed Health Secretary Alex Azar on Thursday to provide more federal support and coordination for Covid-19 vaccine distribution, saying the slow rollout has raised questions about how fast they can inoculate the public.The group, which represents nearly 5,000 hospitals and health systems across the country, said the rollout “has led to concern about whether the task of vaccinating all who are able to take the vaccine will happen as quickly as federal leaders have suggested it would,” according to a letter sent Thursday to Azar, the secretary of the Department of Health and Human Services.More than 17.2 million doses of vaccine had been distributed as of Wednesday, according to the Centers for Disease Control and Prevention, but just over 5.3 million doses have actually been administered. That’s far short of previously stated goals by federal officials of vaccinating 20 million people in December.Richard Pollack, CEO of the AHA, said in the letter to Azar that the slow initial rollout of the vaccine has cast doubt on whether the country will be able to vaccinate enough Americans to reach herd immunity by the summer. Unforeseen issues have emerged in the first weeks of the rollout, he added, calling on Azar to provide more leadership and coordination across states to address the problems.Representatives for HHS did not return CNBC’s request for comment.Pollack said some hospitals have received fewer doses than requested while others have received more than they need “without an explanation for this mismatch.” Pollack added that other differences across state plans are also causing headaches for hospitals and adding to the complexity of the massive vaccination campaign.”We are hearing from hospitals and health systems that serve more than one state that it is hard to manage vaccine distribution when their patients live in jurisdictions with different rules about which patients are prioritized and that are at different priority levels,” Pollack wrote. “As this rollout rapidly evolves, it is absolutely critical that effective situational, real-time leadership is provided nationally.”He called on Azar and HHS to communicate more often and clearly with state, local and hospital officials.And many hospitals across the country are currently overwhelmed treating Covid-19 patients, Pollack said hospitals cannot also vaccinate the public without help. He said hospitals are suffering from staff shortage and limited protective equipment like masks and gloves. Pollack asked for more details about the administration’s plan to include pharmacy chains in the broader vaccine rollout.Pollack emphasized that the goal of the vaccination campaign is to reach herd immunity and bring the outbreak under control. By some estimates, he noted, that could be about 246 million Americans, or roughly 75% of the population.”That would mean vaccinating 1.8 million individuals every day between January 15 and May 31, including weekends and holidays,” Pollack wrote of trying to vaccinate 246 million Americans by this summer. “Currently, there are 64 disparate microplans developed by the states, a few large cities, and other jurisdictions. Has [HHS] assessed whether these plans, taken as a whole, are capable of achieving this level of vaccination?”