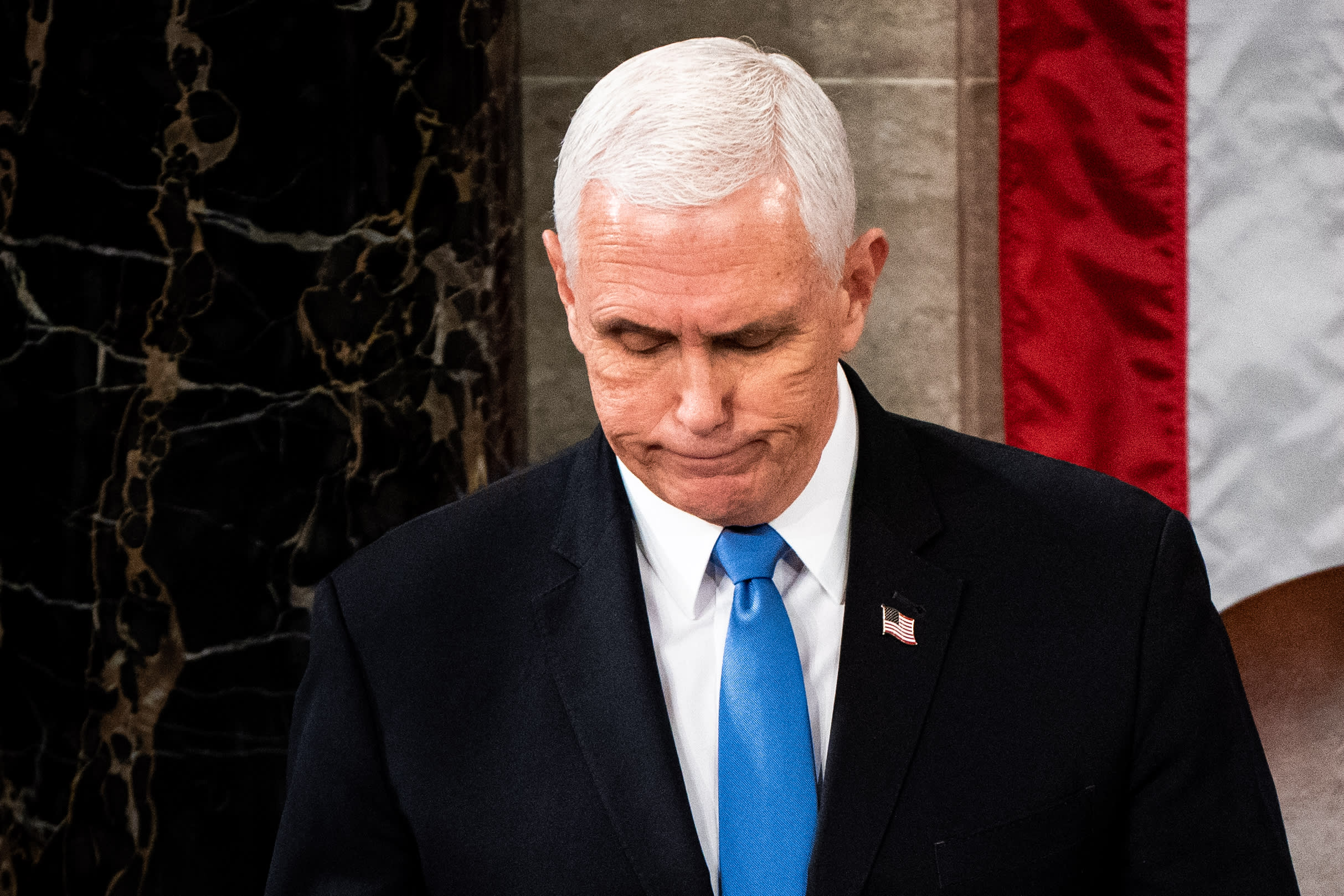 WASHINGTON D.C., USA – JANUARY 6: Security forces block the entrance after the US President Donald Trumps supporters breached the US Capitol security in Washington D.C., United States on January 06, 2021. Pro-Trump rioters stormed the US Capitol as lawmakers were set to sign off Wednesday on President-elect Joe Biden’s electoral victory in what was supposed to be a routine process headed to Inauguration Day. (Photo by Tayfun Coskun/Anadolu Agency via Getty Images)Anadolu Agency | Anadolu Agency | Getty ImagesThe head of the National Association of Manufacturers, a group representing 14,000 companies in the U.S., on Wednesday called on Vice President Mike Pence to “seriously consider” invoking the 25th Amendment of the Constitution to remove President Donald Trump from office.The 25th Amendment states that the vice president can become acting president if he and a majority of the Cabinet declare the president no longer able to hold office. However, if the president contests that declaration, it takes two-thirds of the House and Senate to override and remove him.Two Democratic U.S. representatives worked on a letter to Vice President Mike Pence on Wednesday requesting that he invoke the amendment, according to NBC News.The trade group condemned clashes in Washington that interrupted a congressional gathering to count Electoral College results and officially declare Joe Biden president, saying the events that transpired Wednesday were “not the vision of America that manufacturers believe in.”The statement came as the Business Roundtable and leaders such as Citi CEO Michael Corbat and Salesforce CEO Marc Benioff condemned the acts.Jay Timmons, the group’s president and CEO and a former executive director of the National Republican Senatorial Committee, pointed to the millions of people in manufacturing jobs who are working to fight the coronavirus pandemic, which brought on an economic recession.Last year the group gave an award to Trump’s daughter Ivanka Trump for “extraordinary support” of manufacturing in America.Here’s Timmons’ full statement:”Armed violent protestors who support the baseless claim by outgoing President Trump that he somehow won an election that he overwhelmingly lost have stormed the U.S. Capitol today, attacking police officers and first responders, because Trump refused to accept defeat in a free and fair election. Throughout this whole disgusting episode, Trump has been cheered on by members of his own party, adding fuel to the distrust that has enflamed violent anger. This is not law and order. This is chaos. It is mob rule. It is dangerous. This is sedition and should be treated as such. The outgoing president incited violence in an attempt to retain power, and any elected leader defending him is violating their oath to the Constitution and rejecting democracy in favor of anarchy. Anyone indulging conspiracy theories to raise campaign dollars is complicit. Vice President Pence, who was evacuated from the Capitol, should seriously consider working with the Cabinet to invoke the 25th Amendment to preserve democracy.This is not the vision of America that manufacturers believe in and work so hard to defend. Across America today, millions of manufacturing workers are helping our nation fight the deadly pandemic that has already taken hundreds of thousands of lives. We are trying to rebuild an economy and save and rebuild lives. But none of that will matter if our leaders refuse to fend off this attack on America and our democracy — because our very system of government, which underpins our very way of life, will crumble.”WATCH: Protesters storm the U.S. Capitol, interrupting electoral vote count