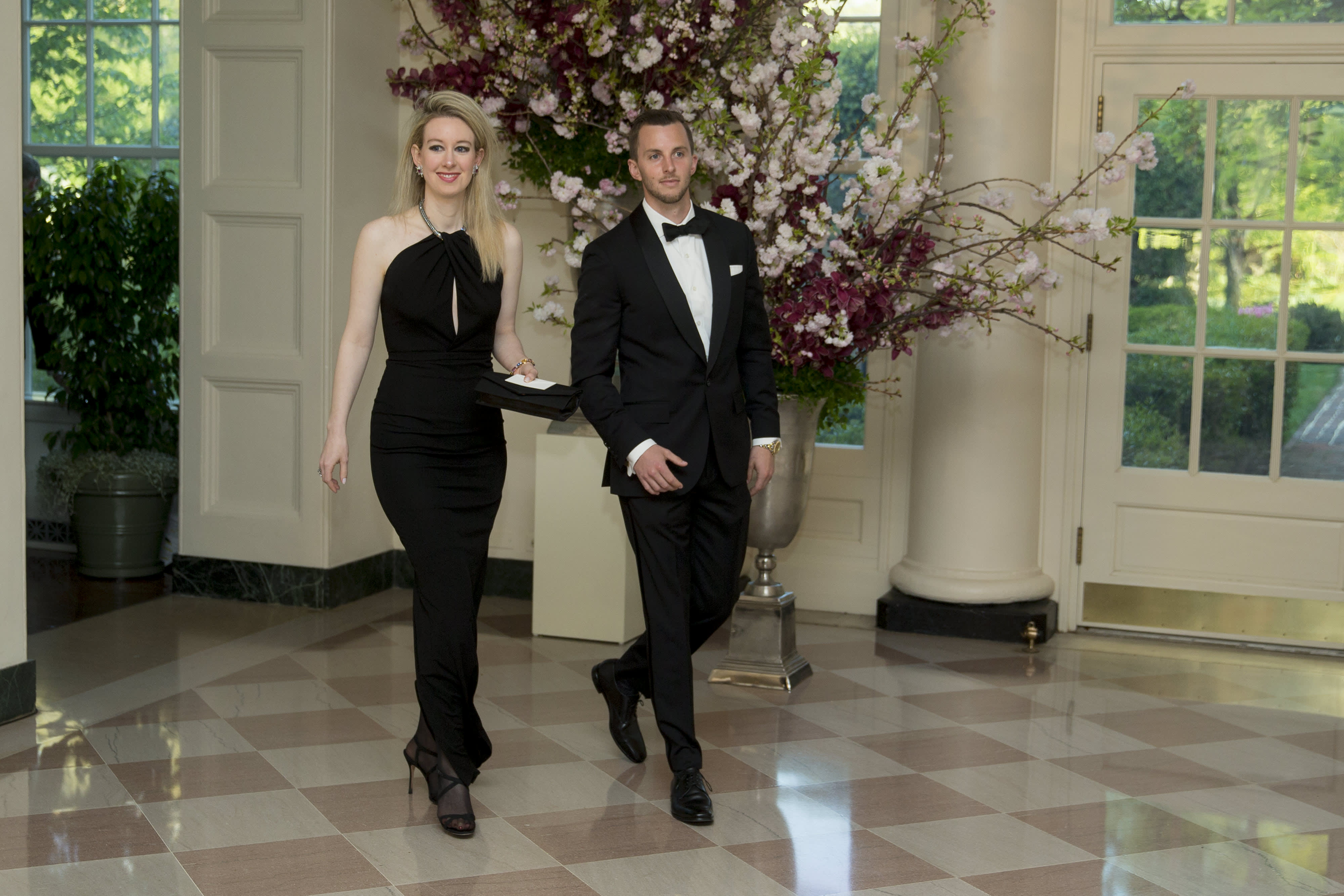 Billionaire Elizabeth Holmes, founder and chief executive officer of Theranos Inc., left, and Christian Holmes arrive at a state dinner hosted by U.S. President Barack Obama and U.S. First Lady Michelle Obama in honor of Japan’s Prime Minister Shinzo Abe at the White House in Washington, D.C., U.S., on Tuesday, April 28, 2015.Andrew Harrer | Bloomberg | Getty ImagesProsecutors are painting a picture of what the public saw: a billionaire entrepreneur who donned designer labels with her black turtlenecks while rubbing shoulders with world leaders.But like the hall of mirrors at the carnival, according to the government, it was all just an illusion.Elizabeth Holmes intended to use Theranos “as a tool to better her personal situation,” prosecutors wrote in a motion with the court Friday night.”The causal connection between Defendant’s fraud and the benefits at issue is strong,” the government said.Holmes and her COO, Ramesh “Sunny” Balwani, each face a dozen criminal wire fraud charges and if convicted they could spend up to 20 years in prison.As CEO of Theranos, prosecutors said Holmes lived an extravagant lifestyle, which included “travel on private jets, stays in luxury hotels, and access to multiple assistants.””Although Defendant’s assistant was an employee of the company, she handled a range of non-business tasks for Defendant, including personal clothes and jewelry shopping, home decorating, food and grocery buying, and other items,” the government said in a filing.The government’s motion was a response to efforts by Holmes’ attorneys to block the jury from hearing details about her jet-setting lifestyle.The government intends to show evidence the alleged fraud at Theranos was directly related to the money and fame Holmes attained as CEO of Theranos.Prosecutors wrote Holmes was “the object of admiration in the business community locally and nationwide, and appeared in numerous publications and on television. She associated with influential individuals including politicians and business leaders. The evidence at trial will show that these benefits were meaningful to Defendant, who closely monitored daily news to cultivate her image.”Holmes was a Silicon Valley darling who attracted more than $700 million in investor funds.”In addition to the tangible benefits that she received from her fraud, she also was the beneficiary of a great deal of favorable attention from the media, business leaders, and dignitaries,” prosecutors wrote.The motion comes on the same night Holmes’ attorneys claim her failed company was no different than any other Silicon Valley start-up trying to make a name for itself.The government “requests an order precluding the defense from ‘focusing on the culture of Silicon Valley start-ups, arguing that founders in this area frequently use exaggeration and dramatic promises to generate needed attention for their companies and attract capital,'” the court filing by Holmes attorneys said.Her attorneys argue that evidence related to the culture of Silicon Valley start-ups may be relevant to the case: “For example, the government intends to present evidence of certain practices that the government claims created a culture of ‘secrecy’ at Theranos, purportedly to show that Ms. Holmes was concealing alleged fraud.””Although Ms. Holmes has moved to exclude such evidence, if it is admitted Ms. Holmes surely could present evidence that other Silicon Valley start-ups used similar practices, and that persons at Theranos were aware of these practices.”Holmes will face her fate in July. In appearances on Zoom, she has seemed sullen at times, a sharp contrast to the image she once projected to the world.