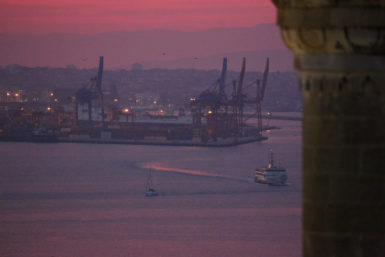 Part of the fair will take place at the Istanbul Shipyards.

The Istanbul Biennial has revealed the artist list for its 16th edition, which is set to open in the Turkish city on September 14. The show will include works by 57 artists and collectives hailing from 26 countries, including Argentina, Germany, Iran, South Korea, Thailand, Turkey, and the United States. Titled “The Seventh Continent,” the biennial will feature 38 new commissions by the participating artists on view across three locations in the city: the Istanbul Shipyards, the Pera Museum, and Büyükada Island.

Among the artists showing work at the event are Glenn Ligon, Mika Rottenberg, Rashid Johnson, Simon Fujiwara, and Yuji Agematsu. Nicolas Bourriaud, the director of the Montpellier Contemporary museum in France, is curating this year’s biennial.

Bige Örer, director of the Istanbul Biennial, said in a statement, “The Istanbul Biennial acts as a space to present new definitions of artistic production and above all to share artistic knowledge and debate both between artists and with the wider public. . . . This year we are excited to be working in three exceptional locations, and for the first time in the historic Istanbul Shipyards. We are delighted that so many brilliant artists have accepted our invitation to work in Istanbul, under the inspired curatorial leadership of Nicolas Bourriaud.”