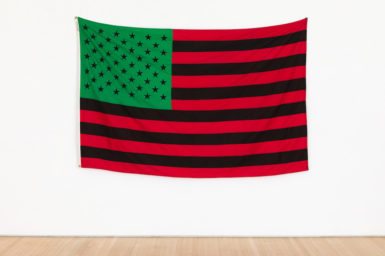 The Broad in Los Angeles has acquired David Hammons‘s African-American Flag (1990), the first piece by the artist to enter the museum’s collection. The work, which is part of a series of five editions, is a version of the American flag that changes out its white and blue tones for the green and black hues associated with the Pan-African flag.

The flag has been a recurring element in Hammons’s work since early on. It figures in some of his 1970s body prints, for which the artist smeared himself with margarine or grease and pressed himself against sheets of paper. One such work, Black First, America Second (1970), is featured in the traveling exhibition “Soul of a Nation: Art in the Age of the Black Power,” which the Broad is currently hosting.

It could be said that Hammons is having a moment in Los Angeles. A solo exhibition of his work at Hauser & Wirth’s L.A. gallery—his first exhibition in the city in 45 years—has been widely acclaimed.

The Hammons flag is not the only notable work to enter the Broad’s holdings, however. The museum also said on Friday that it has acquired Mark Bradford’s 50-feet-long mixed media work Deep Blue (2018), which is now on view at the institution. The piece is meant to reflect the geography of Los Angeles, and its raised mounds signify properties destroyed during the city’s Watts Rebellion in 1965. Deep Blue is the tenth work by Bradford in the Broad’s holdings.