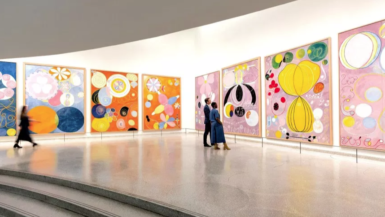 Installation view of “Hilma af Klint: Paintings for the Future.”

The solo show for the Swedish artist, which has been widely praised by critics, has drawn in over 600,000 visitors. That influx of foot traffic has been accompanied by a 34 percent increase in membership to the museum, and more than 30,000 copies of the exhibition catalogue have been sold, surpassing a previous record set for the Kandinsky catalogue in 2009, according to the Guggenheim.

This weekend marks the last chance to see the show: it closes Tuesday, April 23, ending a run that began October 12. For this weekend only, in celebration of the show’s success, the museum will having extended hours, staying open from 10:30 a.m. to 8 p.m. On Saturday, beginning at 5, the museum’s pay-what-you-wish program will be in effect.