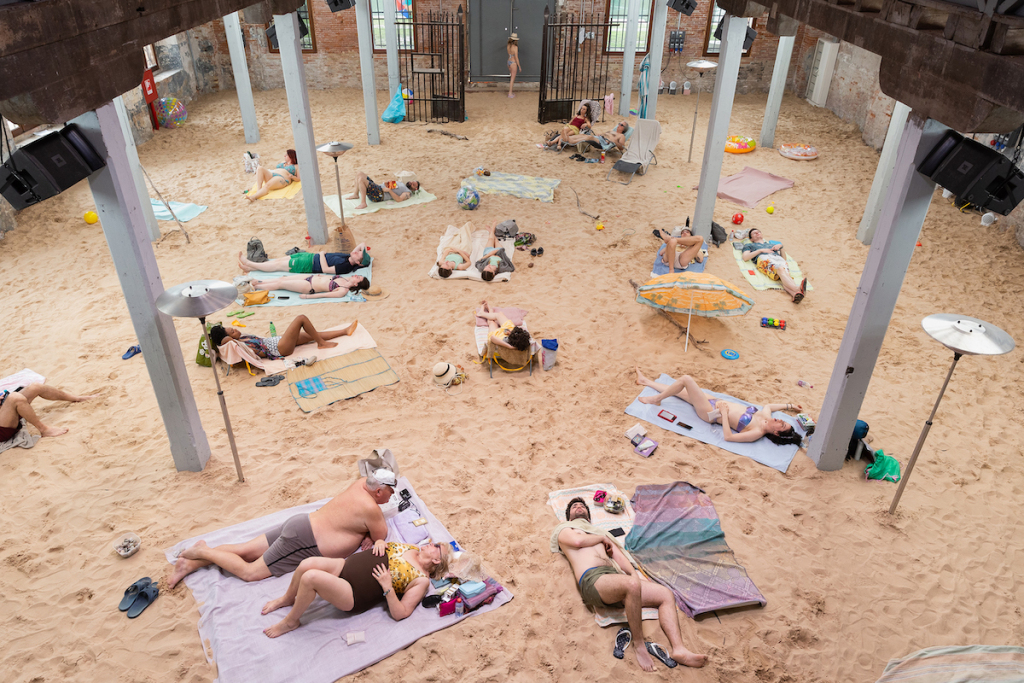 More than two years after it premiered at the 2019 Venice Biennale in Italy, an award-winning installation featuring performers arranged around a recreated beach will make its U.S. debut.
For two weeks this September, Rugilė Barzdžiukaitė, Vaiva Grainytė, and Lina Lapelytė’s Sun & Sea will be shown at the Brooklyn Academy of Music in New York. After that, it will travel across the country, making stops at Arcadia Exhibitions in Philadelphia, the Momentary in Bentonville, Arkansas, and the Museum of Contemporary Art, in a performance presented in collaboration with the Hammer Museum and the Center for the Art of Performance at UCLA.

Sun & Sea was originally shown in the Lithuanian Pavilion at the Venice Biennale, where it won the Golden Lion for best national participation. At the time, it was considered a surprise hit, with long lines following strong word from art and opera critics. For the work, 25 tons of sand are spread around a space. A range of performers—some of them professionals, some of them not—play sunbathers who lounge on this makeshift beach, intoning melodies alluding to climate change and the destruction of the earth.

In its citation for its Golden Lion, the Venice Biennale jury praised the work for its “experimental spirit,” calling the work “a critique of leisure and of our times as sung by a cast of performers and volunteers portraying everyday people.”
“It’s a depiction of awe in the face of oncoming destruction: a sentiment very resonant for 2019,” Andrew Russeth wrote in his ARTnews review. “But it is also a vision of a new community forming, of people banding together and waking up.”
Although Sun & Sea‘s U.S. debut had long been rumored, it had not been announced until now. It has previously made stops in Norway, Switzerland, Germany, and Denmark.
It is unusual for large-scale works like Sun & Sea to tour after their appearance at the Venice Biennale. Anne Imhof’s Faust, which won the Golden Lion when it showed at the German Pavilion during the 2017 Venice Biennale, has so far not been staged in the U.S.
Correction, 7/15/21, 5:45 p.m.: A previous version of this article stated that the performance is going to three L.A. venues. It is only just going to one, MOCA, though it is presented by three spaces in the city.