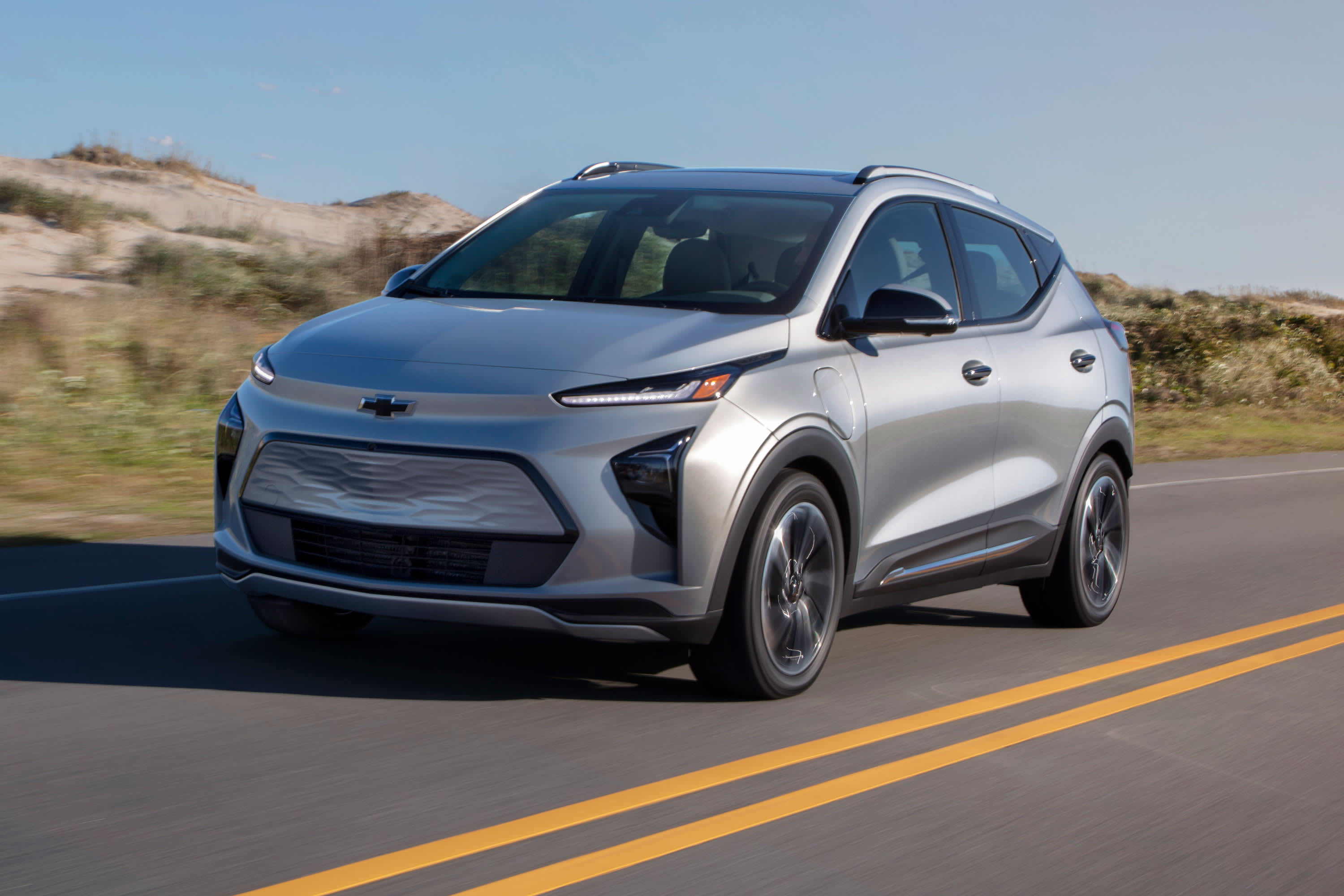 2022 BOLT EUVSource: ChevroletGeneral Motors is taking another step toward its zero-emissions future.The Detroit-based company unveiled a new, all-electric Chevy Bolt Electric Utility Vehicle, or EUV, alongside its newly redesigned Chevy Bolt Electric Vehicle on Sunday evening. The new Chevy Bolt EUV is designed to bring the best of the Chevy Bolt, first released in 2017, but in a taller and longer SUV-like proportion, GM executives said.The vehicles are the first from Chevrolet equipped with GM’s hands-free Super Cruise semi-autonomous highway driving system, which uses facial recognition to identify whether the driver is paying attention so there’s no need for them to touch the steering wheel while the system is operating.Super Cruise is limited to more than 200,000 miles of limited-access freeways in the U.S. and Canada that have been lidar-mapped to assist the on-board system of cameras, radars and sensors.The new 2022 Bolt utility vehicle, which starts at $33,995, is about 6 inches longer than the Bolt EV and has a “modern, muscular design and a roomier interior and ample rear legroom.” The vehicle features a “distinctive front-end with a sculpted grille,” standard LED headlamps, and an upscaled interior, GM executives said.2022 BOLT EUVSource: ChevroletMeanwhile, the revamped 2022 Bolt EV, which starts at $31,995, includes a number of new design updates. GM lowered the starting price for the new Bolt EV by more than $5,000 lower from the 2021 model, which starts at under $37,000, because the cost of the battery technology fell.The hatchback features a more upright bumper cover, or fascia, and updated interior seats that are “more comfortable with a triangular geometric pattern and contrast color stitching providing a more upscale look and feel,” Jesse Ortega, executive chief engineer for the new Bolt EV and EUV, on a media call with reporters.Both of the new vehicles feature a 10.2-inch-diagonal infotainment color touchscreen and integrated climate controls “for clean, intuitive interfaces.”The Bolt EV has a range of 259 miles on full charge while the Bolt EUV hits 250 miles. Drivers will be able to view their current charging status, customize their charge settings and set up notifications through the myChevrolet Mobile App.”Since 2017, we have sold more than 100,000 Bolt EVs globally, and our owners have accumulated more than 1.2 billion miles of EV travel,” Steven Majoros, Chevy vice president of marketing, told reporter on the call. “Bolt EV has helped make Chevrolet the number two selling EV brand and current Bolt EV sales were up 26% in 2020.”The new and refurbished vehicles are part of the company’s plan to launch 30 new electric vehicles globally by 2025. The updated Bolt EV was scheduled to come out last year, but GM delayed the vehicle due to the Covid-19 pandemic.”We want to put everyone in an EV and the new Bolt EUV and redesigned Bolt EV are crucial to doing so,” GM President Mark Reuss said in a statement. Industry analysts have been expecting the Bolt EUV for years to grow scale of the company’s EV platform.Both vehicles are underpinned and powered by GM’s battery electric vehicle 2 platform, which first launched with the Bolt EV in December 2016. The company has only sold about 79,000 vehicles since then.Later this year, the company’s next-generation EV platform with a new battery system called Ultium are expected to launch with the 2022 GMC Hummer EV sport utility truck, or SUT. Initial availability of the Hummer EV in the fall will start at $112,595.The Bolt EV and EUV are expected to help GM appease mainstream electric vehicle buyers, while the company scales up its Ultium platform to lower the cost of its next-generation EVs. Ortega told reporters there’s “no intent” to move the Bolt EV to the Ultium platform.The vehicles are part of GM’s plan to launch 30 new EVs globally under a $27 billion investment in electric and autonomous vehicles from 2020 through 2025.

CVS and Walgreens have a chance to make Covid vaccine rollout more equitable
A tidal turbine built in Scotland is now producing power in Japan
To Top
error: Content is protected !!