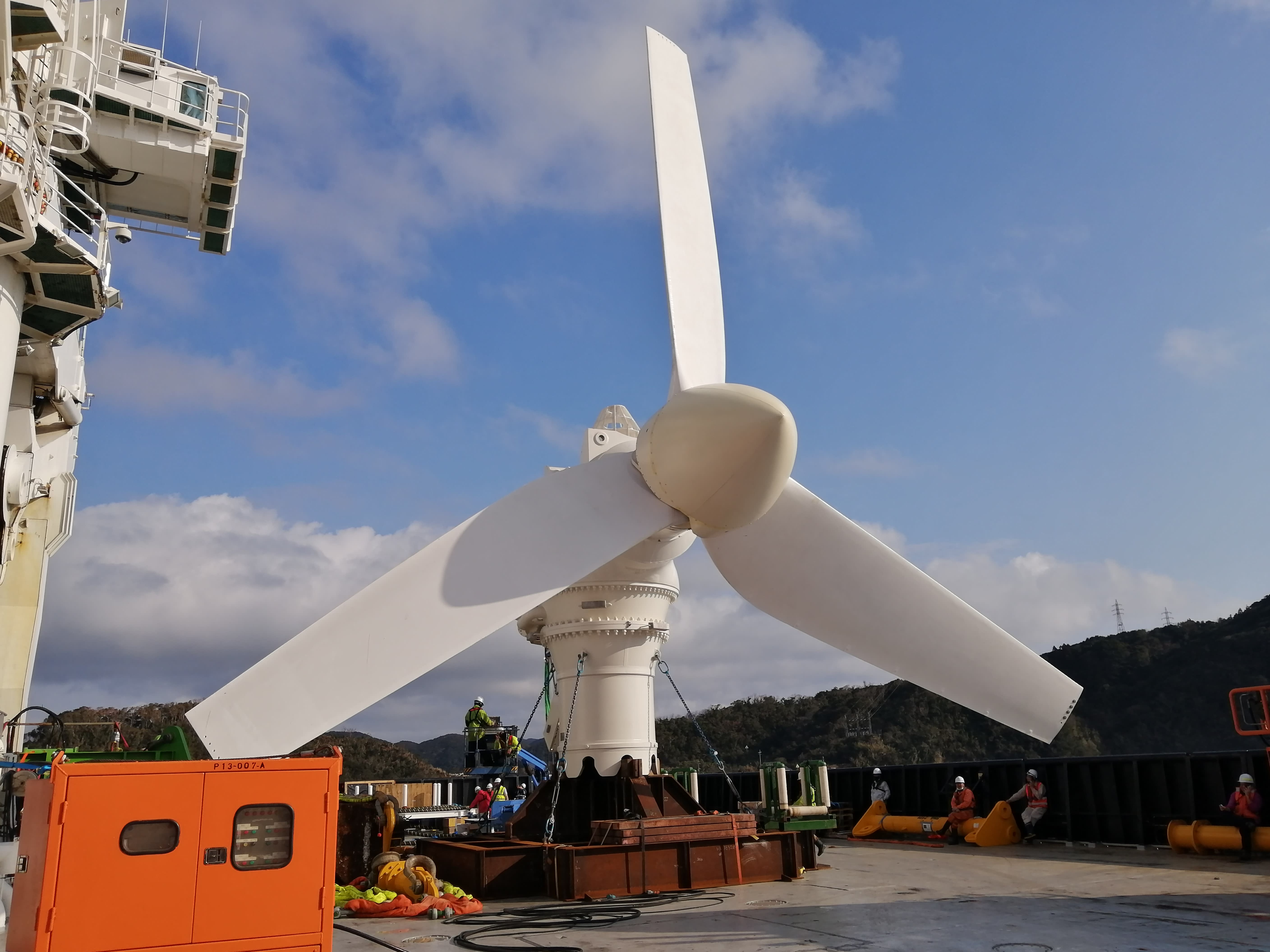 The AR500 turbine awaiting installation in waters off the Goto Islands, Japan.A tidal turbine built and tested in Scotland has been installed in waters off a Japanese island chain, representing the latest example of how the East Asian country is investigating the potential of marine-based forms of energy production.In a statement Monday, London-listed firm Simec Atlantis Energy said its pilot turbine had generated 10 megawatt hours in its first 10 days of operation.The AR500 turbine was put together at a facility in Scotland before being shipped to Japan, where it was installed in waters off Naru Island, which is part of the larger Goto Island chain. According to SAE, the overall project involves the leasing of tidal generation equipment as well as the provision of offshore construction services to Japanese company Kyuden Mirai Energy.SAE’s CEO, Graham Reid, described the installation as a “huge milestone for the deployment of clean, renewable energy from tidal stream and we hope it will be the first of many tidal turbines installed in Japan.”Monday’s news marks the latest example of how companies in Japan, an island nation boasting thousands of miles of coastline, are turning to projects centered around tidal and wave energy.In January, it was announced that shipping giant Mitsui O.S.K. Lines would partner with a company called Bombora Wave Power to scope for potential project sites in Japan and surrounding regions.   The collaboration between the Tokyo-headquartered MOL and Bombora will focus on finding possible locations for the latter’s mWave system, as well as hybrid projects which combine mWave and wind energy.In simple terms, the tech developed by Bombora — which has offices in both the U.K. and Australia — is based around the idea of using rubber membrane “cells” which are filled with air and fitted to a structure submerged underwater.According to a video from the company outlining how its system works, when waves pass over the system, its “flexible rubber membrane design pumps air through a turbine to generate electricity.”The International Energy Agency describes marine technologies as holding “great potential” but adds that extra policy support is required for research, design and development in order to “enable the cost reductions that come with the commissioning of larger commercial plants.”For its part, Japan says it wants renewables to make up 22% to 24% its energy mix by 2030.Last October, Prime Minister Yoshihide Suga said the country would target net zero greenhouse gas emissions by the year 2050. By 2030, Japan wants a 26% reduction in greenhouse gas emissions compared to 2013.Work still needs to be done for the country to achieve its aims, however. In 2019, its Agency for Natural Resources and Energy said the country was “largely dependent on fossil fuels” like coal, oil and liquefied natural gas.