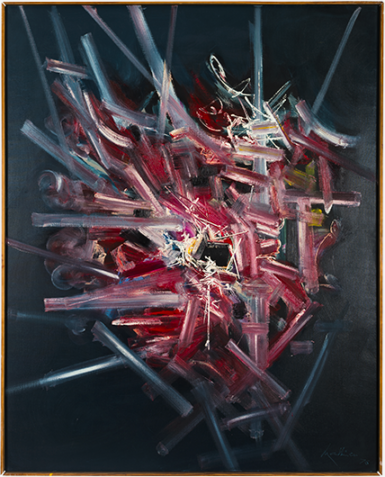 With major galleries around the world investing in artist’s estates, one has headed to two big enterprises. That of the postwar French painter Georges Mathieu is now represented by Nahmad Contemporary, of New York, and Perrotin gallery, of New York, Paris, Hong Kong, Seoul, Shanghai, and Tokyo. Nahmad mounted an exhibition of four monumental paintings by Mathieu earlier this year, and Perrotin is planning a show of the artist’s work for Hong Kong in November.

Emmanuel Perrotin and Joe Nahmad, the founders of their eponymous galleries, said in a joint statement, “Our decision today to collaborate is an exciting challenge and will reinvigorate Mathieu’s legacy internationally.”

Mathieu, who died in 2012 at the age of 91, made Pollockian abstractions, often working in front of crowds. One of the leading artists of the lyrical abstraction movement, which promulgated a non-figural style founded upon emotion and affect, he placed an emphasis on the physical minutia behind his brushwork.

Though he was one of the most celebrated artists of his time, outside France, Mathieu is far less known. His last institutional retrospective was held at the Jeu de Paume in Paris in 2002, and his auction record stands at $1.82 million—a figure set at a sale at Sotheby’s in the French capital in 2008. A 19-foot-long canvas by the artist is now on view in a Richard Prince–curated portion of a permanent collection show at the Guggenheim Museum in New York.