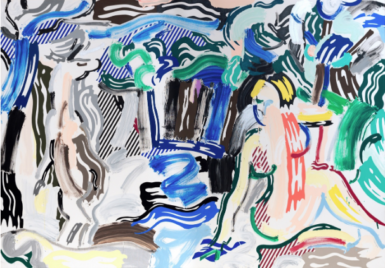 Galerie Thaddaeus Ropac is set to host a survey of 1980s-era works by Roy Lichtenstein at its location in Salzburg, Austria. Opening July 27 and running until late September, the show, titled “The Loaded Brush,” will include paintings, sculpture, collage, and drawings. The presentation of 35 works has been organized in collaboration with the artist’s widow, Dorothy Lichtenstein.

“I have had a special history with Lichtenstein thanks to Leo Castelli, who introduced him to me in the 1990s,” Thaddaeus Ropac told ARTnews, in reference to the artist’s fabled dealer at the dawn of his career starting in the ’60s.

During the ’80s-era explored in the forthcoming show, Lichtenstein explored ways to play with notions of gestural brushstrokes within the context of Pop art’s flattened colors and thick black outlines. “He really innovated his language with the brush through the ’80s,” Ropac said.

The dealer added that Lichtenstein visited his Salzburg gallery in 1991 when he was working on a project in the area. Though Lichtenstein has been included in six group shows at Salzburg location, Ropac added, “Since then, it has always been a dream for me to make an extensive exhibit of his work with my gallery.”