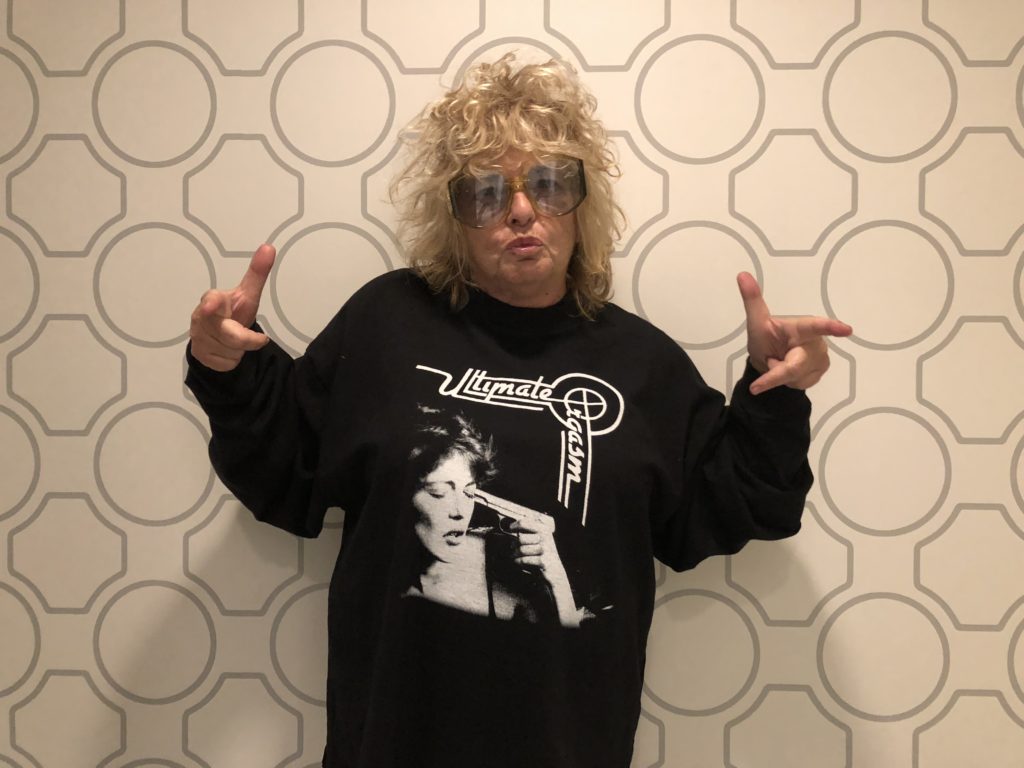 Joyce Pensato, whose endearing, scrappy pictures of cartoon characters made her one of the most exciting New York–based figurative painters during her time, has died, according to a representative for Petzel gallery, which showed her work in New York. She was 78.

“She has been an incredible spirit for all of us, every artist friend, collector, writer, and all of her fans in the gallery community,” said Friedrich Petzel, founder of the eponymous gallery, which represents her (alongside Lisson Gallery, Corbett vs. Dempsey, Capitain Petzel, and Nanzuka), in a statement. “The last few months were hard for many of her admirers. But Joyce kept being Joyce, full of energy, humor, and drive to create art. Nothing could stop her, she has been a true inspiration for everyone who was touched by her.”

Pensato’s paintings, drawings, sculptures, and installations have an anti-establishment spirit that was notably her own, with a free-flowing manner that seems to be the creation of an artist who cared little for the art world’s tendencies toward clean, polished work. “I like being messy and I love throwing paint around and fucking it all up,” she told Artforum in 2017. As a result, Pensato’s paintings exude an air of coolness that mirrored the sensibility of their creator, who was often photographed in reflective sunglasses and gaudy accessories.

Her best-known works are black-and-white images of cartoon characters such as Mickey Mouse, Felix the Cat, Batman, Homer Simpson, and South Park’s Cartman. Working from figurines and sculptures of such characters, Pensato crafted images that appear to drip with paint. Rendered in black against monochromatic white backgrounds, the figures often appear even more distressed in Pensato’s drawings, which were frequently erased and scraped during their making.

Based in Brooklyn for much of her career, Pensato began painting such works in the early 1990s, after making abstractions that she once called “horrible.” Some of her earliest works of the kind were set to go on view in her first solo show, at Fiction/Nonfiction gallery in New York’s East Village in 1991, but just before the show was about to open, the gallery’s owner pulled the plug on the exhibition, telling Pensato that the work wasn’t up to snuff.

Despite being “devastated” by the show’s cancellation, Pensato persisted. She often described her process as translating techniques for drawing into the realm of painting, and she cited Abstract Expressionists like Franz Kline and Willem de Kooning as influences. Her formative paintings were also influenced somewhat by her colleagues—the painter Christopher Wool, with whom she shared studio space early in her career, convinced her to use enamel instead of oil paint. (With oil, she “lost the figure,” Pensato once told Hyperallergic.)

Among the most memorable presentations of Pensato’s work was one in 2012, when she opened a solo exhibition of her cartoon-character paintings at Petzel in New York. Alongside the canvases, she showed crates, fabrics, and knickknacks from her extensive holdings of Mickey Mouse paraphernalia, many of them slathered in paint.

In recent years, Pensato began looking to photographic material. For a 2017 project in the atrium of the Museum of Contemporary Art Chicago, she presented a 61-foot-tall vinyl print in which photographs of Abraham Lincoln were flecked with white paint. Asked to explain her choice of Lincoln, Pensato once said that it probably had something to do with the 2016 U.S. presidential election, and left it at that.

Joyce Pensato was born in New York in 1941 to parents of Italian heritage. Growing up, she realized she wanted to be an artist when she saw Lust for Life (1956), a movie about Vincent van Gogh, and she went on to try her hand at illustration. Having “failed” at that career path, as she once said, she went on to pursue painting at the New York Studio School, where her teachers were often shocked by the work she produced.

While in school, Pensato linked up with one of the day’s most important artists when, in 1979, she met Abstract Expressionist painter Joan Mitchell, whom she later visited at her home in Vétheuil, France. Pensato once recalled that Mitchell told her that, as a painter, she had a choice—to work in the French style (which she said placed a greater emphasis on light and color) or the German style (which was all about darkness). Pensato told Mitchell that she would opt for the French mode—but then realized later that she was an expressionist of a German sort.

Pensato’s work has been exhibited extensively in America since the ’90s. The Contemporary Art Museum in St. Louis held the first institutional survey of her work in 2014, and she also has had solo exhibitions at the Modern Art Museum Fort Worth in Texas, the High Museum of Art in Atlanta, and the Rose Art Museum in Waltham, Massachusetts. Among Pensato’s many accolades were an Anonymous Was a Woman grant, a Guggenheim Fellowship, a Pollock-Krasner Foundation Award, and the Robert De Niro, Sr. Prize, which is given to mid-career painters.

In interviews, Pensato often talked about how much fun she had while painting, with a sense of amusement that continued in her final years. In 2017, in a conversation published in Interview magazine, she spoke with Stanley Whitney, also an aging painter, about enjoying her lot in life. “Look at me!” Pensato said. “I’m having the best time.”