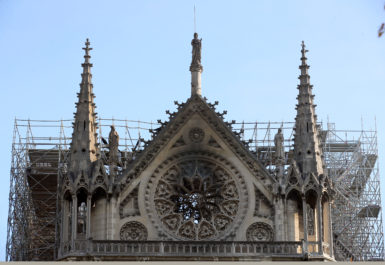 Following a blaze that burned the central spire and a large part of the roof of the Notre-Dame Cathedral in Paris, the French government has announced an international competition for architects to propose plans for rebuilding the structure.

The news follows a promise by French president Emmanuel Macron that the cathedral will be rebuilt within the next five years, in time for Paris to host the 2024 Summer Olympics. Officials at the cathedral have said that Notre-Dame will likely be closed for five to six years.

“This is obviously a huge challenge, a historic responsibility,” France’s prime minister, Édouard Philippe, said of the project.

Already the rebuilding initiative has received a large influx of funds, with sizable sums coming from two art collectors—François Pinault, who along with his son François-Henri said he will give €100 million ($113 million), and Bernard Arnault, who said he will give €200 million ($226 million). Officials have estimated that the project has already received close to €885 million ($995 million) in donations from philanthropists and the general public.

Officials are still assessing damage to works inside the cathedral. It is known that one of the most valuable objects in Notre-Dame, a crown believed to have been worn by Jesus Christ, was salvaged, as were 16 sculptures that had been removed in the days before the fire.