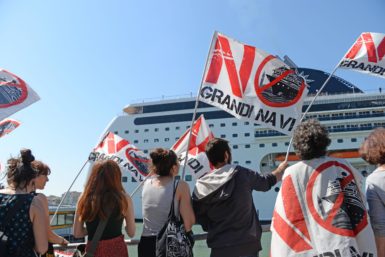 A protest against the presence of cruise ships in Venice was staged following the accident on the Giudecca canal today.

With the Venice Biennale currently on view in Italy, some locals have expressed concerns about the delicate state of their city. For many, an accident on Sunday has confirmed these fears.

This morning, a cruise ship collided with the San Basilio terminal and a docked tourist boat in Venice. According to a CNN report, four people sustained “light injuries” when the MSC Opera hit the dock and a smaller boat named the River Countess.

MSC Cruises said in a statement that the incident, which occurred on the city’s Giudecca canal, a thoroughfare that connects with the San Marco basin, was precipitated by a “technical issue” with the ship. The cruise line also said that it is carrying out an investigation to determine the exact causes.

A video posted to Twitter shows onlookers running from the out-of-control vessel as it approached the dock, and Italy’s environmental minister, Sergio Costa, wrote on the platform that the accident demonstrates that “cruise ships must not sail down the Giudecca (canal).”

Over the past couple years, various groups in Venice have argued that cruise ships should not be allowed to sail down the Giudecca—an area that has seen increased interest from Biennale visitors, thanks to the surrounding area having recently been named the city’s first official art district. In 2017, one committee even proposed an alternate route that the ships might be able to take through a lagoon. The plan was nixed after critics said that that route might be unsafe.